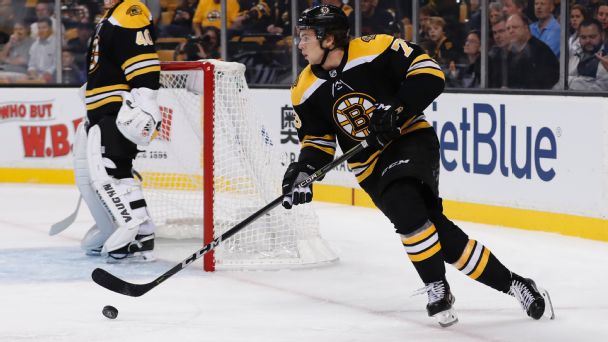 Few things felt permanent about the first month of the season. A few weeks ago, the Toronto Maple Leafs seemed unstoppable; now a parade down Yonge Street sounds like a punch line again. The typically disciplinedPittsburgh Penguinsare among the league leaders in both penalty minutes (13.3) and goals allowed (3.6) per game. Scoring is at a torrid pace overall and goals are coming in bunches; the 16 hat tricks so far are the most to start a season since 1996-97.

Whether any of these trends have staying power, however, remains unclear.

A few developments that began brewing during the first month do look likely to stay hot, however. Here are four early-season storylines that definitely will stick:

The Philadelphia Flyers captain is coming off a disappointing 2016-17 season. Still hampered by the effects of hip and abdominal surgeries he had undergone the previous May, Giroux scored just 14 goals last season. Since posting 86 points in 2013-14, he has finished with 73, 67 and 58 points, respectively.Giroux, who will turn 30 in January, needed to change something about his game to reverse that trend of declining production.

This past offseason, the Flyers' coaching staff hatched a crazy idea: What if Giroux switched positions? He was a winger before he turned professional, but he has played center almost exclusively for Philly. During a preseason game, the Flyers had Giroux line up on the left side of centerSean Couturierand right wingerJakub Voracek.

It might have been a surprise move, but it wasn't a flip decision.

"A lot of discussion went into it," said Flyers coach Dave Hakstol. "We knew where [Giroux] was at, in terms of being at a high level coming into the season, and we decided to take a look at it. It made sense for our team, but it also made sense for G and for Cout and for Jake. They've all worked very hard to make it a very productive line."

The preseason experiment was so successful that they carried it over to the regular season -- and now, a month in, the line is clicking on all cylinders. It's hard to imagine Hakstol reversing course. Through the first 15 games, each player on the line has at least 17 points. Giroux has eight goals, which is more than halfway to his entire total for 2016-17. Is Hakstol surprised?

"Honestly, I know it's cliché," the coach said. "But nothing surprises me with G."

The Kingsare sticking around the top of the standings

Before the season, I asked a handful of players what team might surprise everyone and make a deep playoff run. One veteran from a Western Conference team barely hesitated before blurting his answer. "The [Los Angeles] Kings," he said. "Definitely the Kings." Why was he so sure? "They've been there before," the player said. "And they pretty much have the same players. Sometimes you get a fresh face with a coach, and it changes things."

That's exactly what has happened underJohn Stevens. The Kings have essentially the same roster as they did in 2016-17. That team finished fifth in the Pacific Division at 39-35-8, leading many to wonder if this was the last hurrah for a roster filled with bloated contracts. Not quite. Stevens has brought a more up-tempo style, and the Kings have responded, recapturing some of the magic from their recent Stanley Cup teams.

With seven goals already, captainAnze Kopitar should match his entire total for last season (12) sometime this month. GoalieJonathan Quick is again playing out of his mind (8-2-1, .939 save percentage and 1.99 goals-against average). Los Angeles, with 22 points in its first 14 games, has recaptured dominance in the Pacific Division.

TheBoston Bruinsrookie was a popular preseason Calder Memorial Trophy pick. McAvoy has been a lot more than that one month into the season. The 20-year-old Boston University product leads the Bruins in assists (seven) and trails only his defensive partner,Zdeno Chara, among Bostonskaters in ice time per game (22:56). The duo is tasked with shutting down the top lines.

The reason the Bruins are relying on McAvoy so heavily: their blue line has been battered by injuries. Torey Krug missed time to start the season, while Adam McQuaid is out an extended period after surgery to repair a broken right fibula. McAvoy's workmanlike play will be a crucial bridge for a team with an identity crisis. Boston's roster is a blend of aging veterans who helped win the Stanley Cup in 2011 and a crop of youthful players that the front office is ushering in.

Connor Hellebuyck is sticking as Jets' starter in goal

The Winnipeg Jets are a Western Conference sleeper, and Hellebuyck is a large reason. The 24-year-old goaltender has been fantastic, posting a 8-0-2 record, with a .936 save percentage and a 2.12 GAA. Hellebuyck's terrific play has covered up other deficiencies that Winnipeg is working through. The Jets' puck-possession numbers are among the league's worst. AndPatrik Lainewould be the first to admit that he's not off to a great start. But Hellebuyck is.