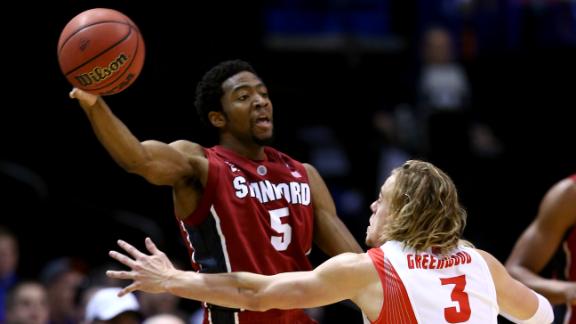 ST. LOUIS -- Stanford made the most of its first NCAA appearance since 2008, starting fast and finishing strong. New Mexico made another hasty exit.

"We came out energetic and ready to go," guard Chasson Randle said after the Cardinal led almost start to finish and knocked off the seventh-seeded Lobos 58-53 on Friday. "We knew how big this game was. We definitely had enough confidence to finish out the game."

Randle scored 23 points for 10th-seeded Stanford (22-12), which built an early 16-point lead then held on after New Mexico rallied to tie it midway through the second half. They got four crucial free throws from reserve walk-on Robbie Lemons and Randle in the final half-minute after New Mexico had cut the deficit to two points. They will play the Eastern Kentucky-Kansas winner on Sunday in the third round.

For now, coach Johnny Dawkins wanted to savor his first tournament win in six seasons. His previous signature triumph was an NIT title two years ago.

"I haven't had the chance to even think about that," Dawkins said. "I have been in this tournament a number of times as a player and coach and the thing you have to do is stay focused on what you're doing.

Cameron Bairstow had 24 points and eight rebounds but the Lobos (27-7) got off-days from their other top threats. Kendall Williams and Alex Kirk, who together average 30 points, combined for just six.

"I thought I had some good looks, and some of them were short," Williams said. "The first one was an air ball and I just couldn't find the hoop."

New Mexico has been one and done the last two seasons, losing as the No. 3 seed to Harvard last year under coach Steve Alford and now as the No. 7 under Craig Neal. The Lobos' unofficial theme was "Unfinished Business."

"We've done about everything you can do, it's just getting better in the tournament," said Neal, who was an assistant last year. "I just wanted to get these guys back and have another chance. It just didn't work out for us this time."

Stanford got away with an off-day from Dwight Powell, who missed all eight shots, fouled out and scored three points. Powell averages 14.2 points, second on the team.

"You're going to have to win games like this where your best player is not at their best," Dawkins said. "I think he's a young man that will bounce back. He always has."

Both teams' big men, Nastic and Kirk, were dogged by foul trouble.

Stanford hit eight of its first 10 shots and scored 17 straight points, including six from Randle, for a 20-4 lead with 13:23 to go in the first half.

New Mexico went 6:26 between points and more than 7 minutes between baskets before gaining its footing. The Lobos kept feeding it to Bairstow and ended the half on an 8-0 run that cut the deficit to 32-27.

"We got out early, they kept fighting, they kept coming back," Dawkins said. "Guys stepped up and made plays when we really needed them."

Lemons scored his only points on two free throws with 23.8 seconds to go to put the Cardinal up by four. He's a 58-percent free throw shooter and played just seven minutes before foiling New Mexico's strategy.