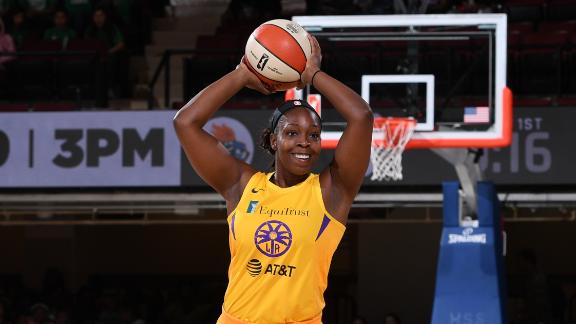 WHITE PLAINS, N.Y. -- With the game on the line, Chelsea Gray took over.

Gray scored a career-high 29 points and keyed the Los Angeles Sparks' rally in the fourth quarter to beat the New York Liberty 78-73 on Tuesday in a school matinee game.

Trailing 69-64 with 4:42 left, the Sparks scored 10 straight points -- the last eight by Gray -- to take a 74-69 lead with 1:21 left. Tina Charles finally ended the 3-plus minute scoring drought for New York to get the Liberty back within three. After Gray missed on the next possession, New York had a chance to tie, but Charles' 3-pointer bounced off the rim.

"I just sensed we weren't getting the looks we wanted to and I saw the ball wasn't moving," said Gray, who also recorded her 500th career assist. "Looks get better as the ball swings side to side. I saw one go down and it felt good. My teammates were like that's a good shot and keep doing it."

Gray made all four of her free throws in the final 23 seconds to seal the win.

"She's been working her way back into condition after playing overseas," Sparks coach Derek Fisher said. "She hasn't played at this level the first few games, today she did."

Chiney Ogwumike added 15 points and 10 rebounds for the Sparks (2-1), who started a four-game road trip.

Charles finished with 21 points and 14 rebounds. Her last basket of the game moved her into first place on the franchise all-time scoring list, passing Vicki Johnson with 3,248 points.

"It means a whole lot," Charles said of the accomplishment. "This franchise means the world to me, so for that to happen, I would've never imagined it. I'm just grateful to be able to play in my city."

Amanda Zahui B. anchored the New York defense. She had six blocks -- two short of the franchise record set by Kiah Stokes.

The loss was the 16th straight for New York (0-3) dating back to last season.

"Tough one. Best effort of the season out of the three games," said Liberty coach Katie Smith, who celebrated her 45th birthday. "We had a lot of opportunities to finish this thing off. ... Three stops in a row that hurt us. We've got to find a way to get those in."

The first half was a back and forth affair with neither team getting more than a five-point lead. Gray's jumper with about 30 seconds left broke a 34-34 contest and gave the Sparks a two-point lead at the half.

FISHER RETURNS: The Sparks' first-year coach said he hadn't been back to New York since getting fired in 2016 after a short stint as coach of the Knicks. Fisher, who played 18 years in the NBA, shared with his team how life can be a journey.

"The New York part I shared with them about how life throws things at you sometimes. Don't plan for it. You can't expect to get embarrassed. You failed. It didn't work out," Fisher said. "How you have to keep pushing and learn from it. That's the best part about being back here, not sticking it to New York. I loved my time here in the city. The fans. I have nothing negative to being back here."

SHOWING APPRECIATION: Utah Jazz star Donovan Mitchell sat courtside. He spent most of halftime signing autographs and taking photos with many of the kids in attendance.

EARLY BIRDS: The Sparks flew in Sunday for the 11 a.m. tip on Tuesday. Fisher and the players said they wouldn't use the early tip time as an excuse. He noted many players usually work out in the mornings around the same time the game started.

NEW ADDITION: LA added Ashley Walker to their roster on Monday after going below 10 healthy players on their active roster due to injuries and overseas commitments. Candace Parker (hamstring) and Alana Beard (left leg) are out. The Sparks will be without Maria Vadeeva for the four-game road trip because she's overseas playing for the Russian national team. Walker was in training camp but waived on the final day. In a pair of preseason games, the 32-year-old Cal graduate averaged 14 points while shooting 60% from the field. She didn't play against the Liberty.

Sparks: At Connecticut on Thursday.