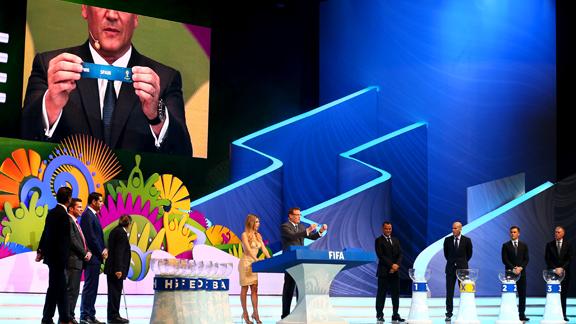 Our expert bloggers will give their thoughts ahead of each World Cup game, so as Chile take on Australia in Group B, Angus McNeice (Chile) and Rob Brooks (Australia) are your guides.

Angus McNeice: The previous time Chile met Australia in the World Cup was at Olympiastadion in 1974 under the shadow of the Berlin Wall, and the South American nation had recently plunged into the dark of what would be a 17-year dictatorship. The sides battled to a goalless draw and failed to exit the group behind East and West Germany.

Forty years later, Chile finds itself in a group groaning under the weight of European powerhouses Spain and the Netherlands, and must defeat Australia to have a realistic shot at the round of 16. Moreover, should the battle for second come down to goal difference, all will be looking to lay the hurt on the group's weakest team.

Chile, however, must be cautious. To view Australia as whipping boys is to ignore the revolution that has occurred under Ange Postecoglou. The young side is fearless and eager to come at opposition, as it showed in the opening half-hour of their friendly last week against Croatia before it shut down to preserve gas.

Both striker Mauricio Pinilla and coach Jorge Sampaoli have said the first fixture will be the hardest, due to unfamiliarity with the opposition and nerves, respectively.

Rob Brooks: Given these two nations have only ever faced each other once at a World Cup -- in 1974 -- history plays little part in this clash. Instead, the stakes boil down to one thing: taking points from the opening match. Australia learned only too well the power of picking up points in the first group-stage match in 2006, when they clawed their way back from a goal down to defeat Japan 3-1. Had they not done so, the course of Australian football might have been altered forever. For Australia to have any chance in 2014, it must throw everything at Chile from the outset.

AM: Australia will be most concerned by Alexis Sanchez, and it has every right to be. The Barcelona attacker is in dominant form, and the proven sprinter's talent has grown a third dimension. All of Chile's past five goals were created by Sanchez, and all came via surgical through balls from midfield.

And should Jorge "El Mago" Valdivia be fit to start the match, the innovative playmaker would liberate Sanchez in his regular role on the right of the technical area, where the damage he can cause is common knowledge.

RB: After a troubled year on and off the field, Mark Bresciano will be geared up for his most influential role to date in a World Cup. The attacking midfielder has a real knack of turning up for important goals, and his general ability to find space between the lines could be a key to Australia sustaining possession in this fixture. Though still struggling through injury himself, Bresciano's importance to the Socceroos has been magnified by the absence of Tom Rogic. The stage is now set for one of the last of Australia's golden generation to bow out in style.

AM: In this exciting Australian team, it's tempting to warn of the merits of young attacking talent such as Tommy Oar, though given the nature of this fixture -- the competition's tallest and shortest sides going head-to-head -- veteran Tim Cahill is the danger man.

Australia's all-time goal scorer still holds the highest rate in headed goals per game in Premier League history, and Chile will look to maintain possession and avoid defending set pieces at all costs.

In previous unfancied World Cup sides, Cahill has scored three goals in five group-stage matches and does not need a second chance to hurt teams.

RB: Quite simply, Sanchez is the man Australia fears most -- and with good reason. The Barcelona man can pull out some amazing strikes at times -- see his stunner against Atletico Madrid in the final game of the La Liga season for proof -- and a new-look Australia defence will need to maintain concentration for the full 90 minutes. Just one lapse could see the Socceroos struggle, so expect captain Mile Jedinak to throw his weight around early on to liven up the defenders behind him.

AM: Chile will aim to break Australia's will with sustained periods of advanced possession, and the man responsible for maintaining this up-tempo passing game is Marcelo Diaz. The midfield metronome links the back line to the target men with urgency and fluid groundstrokes, and the Socceroos will rely on Jedinak to interrupt Chile's rhythm.

In a news conference on Monday, Jedinak named the FC Basel man when warning Australia fans not to feel buoyed by the possible absence of Arturo Vidal, so he appears fully aware of the crucial role Diaz will play for Chile in his first World Cup.

Both players enter this tournament brimming with confidence. A man of courageous heart, Jedinak recently captained Crystal Palace in its great escape from odds-on relegation in one of Europe's toughest leagues, while Diaz's neck is heavy with championship medals accrued during the past three years, and the player has no doubt that he belongs on football's greatest stage. This faceoff should excite.

RB: Oar -- or more accurately, whoever plays on the left flank for the Socceroos -- against Chile's right-back, Mauricio Isla. The Juventus man is expected to bomb on at every opportunity, leaving every possibility for the door to be open for Australia's left-sided attacker -- likely to be FC Utrecht's Oar from the opening whistle -- to hit swiftly on the counter. If Oar is unable to capitalise on this space in the opening half, Australia might deploy the pace of Ben Halloran on that side to pull Chile out of their shape.

AM: Chile wins 3-1. Australia will approach this as a must-win game, and likely its best shot at a result, therefore leaving itself exposed against a team of higher quality. To compound this, as the second underdog in Group B, Chile won't allow complacency to creep into its game, and neither will it let upcoming fixtures distract from the task at hand.

RB: This is no time for pessimism: 1-0 win for Australia. If the defence can hold firm in the opening stages, the belief that will flow through this team could force a shocking result.