Chris Paul to give Spurs serious consideration during free agency 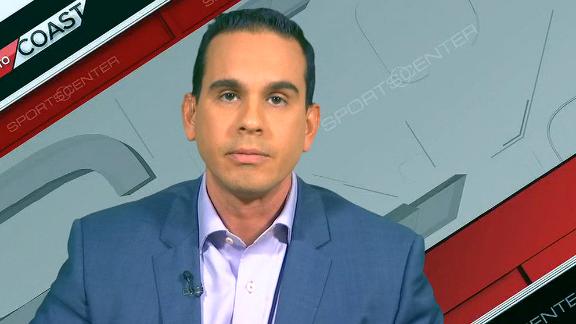 All-Star point guard Chris Paul intends to give the San Antonio Spurs serious consideration in free agency this summer in the event he decides to leave the LA Clippers, according to league sources.

Sources told ESPN that Paul, for all of his undeniable fondness for Los Angeles, is intrigued by the idea of teaming up with the likes of Spurs coach Gregg Popovich and MVP top-three finalist Kawhi Leonard in his quest to achieve the deep playoff success that has eluded Paul to this point in his career.

Free agency is still a month away, but sources say the Clippers already have begun contemplating roster and organizational changes aimed at convincing Paul to re-sign after he declines to exercise his player option, as expected.

Sources say the Clippers' pursuit of NBA legend Jerry West to join their front office, as ESPN reported earlier this week, is an example of a potential addition aimed at swaying Paul to stay.

The Spurs, sources say, are increasingly considered a lock to at least secure a face-to-face meeting with Paul when free agency begins July 1, despite the fact San Antonio would almost certainly have to sacrifice considerable roster depth to make him a representative contract offer.

As daunting as some of the moves are that San Antonio would have to consider to create the requisite salary-cap space to aggressively pursue Paul, one source said of the Spurs' interest in the veteran floor leader: "They love him."

The Clippers have been widely regarded for months as strong favorites to retain Paul in free agency, thanks not only to Paul's strong ties to the city but also the significant financial advantages Los Angeles possesses when it comes to paying him compared to an external suitor such as San Antonio.

The 32-year-old also has found lucrative marketing success in his six seasons with the Clippers -- starring, most notably, in a series of State Farm commercials -- but frustration has been mounting for Paul and throughout the organization thanks to a string of playoff and injury disappointments.

The Clippers have yet to progress beyond the second round of the playoffs in Paul's six seasons. He has earned nine All-Star selections and has helped transform the Clippers from longtime laughingstock to a perennial 50-win team, but his 76 career playoff games without making it to the conference finals stands as an unwanted league record.

The appeal of teaming up, for both Paul and the 61-win Spurs, is thus clear.

The NBA Finals opened Thursday night with seven All-Stars combined on the rosters of the Golden State Warriors and Cleveland Cavaliers, which hasn't happened in the NBA's championship round since 1983, when the league housed only 23 teams.

San Antonio could inch closer to a similar roster model by adding Paul to the duo of Leonard and former All-Star power forward LaMarcus Aldridge.

San Antonio was then a finalist last summer in the Kevin Durant sweepstakes, before Durant chose to leave the Oklahoma City Thunder for the Warriors.

What could thwart San Antonio in its pursuit of Paul -- besides the various benefits available to him by staying with the Clippers -- is the number of players that Spurs management would have to clear out to be able to create the needed cap space to sign an A-lister like Paul.

There are too many variables and permutations at this juncture to know exactly how the Spurs will proceed. But the list of players whose futures in San Antonio could be affected by a full-on Paul pursuit includes longtime Spurs mainstays Tony Parker and Manu Ginobili as well as Pau Gasol, Danny Green, Patty Mills, Dewayne Dedmon, David Lee and the emerging Jonathon Simmons.

Spurs would need to 'move mountains' for CP3
Jorge Sedano finds a Chris Paul to San Antonio deal too complicated for either side.