Clemson is done! Texas will win the Big 12! Well, we bring some reality to your Week 1 conclusions 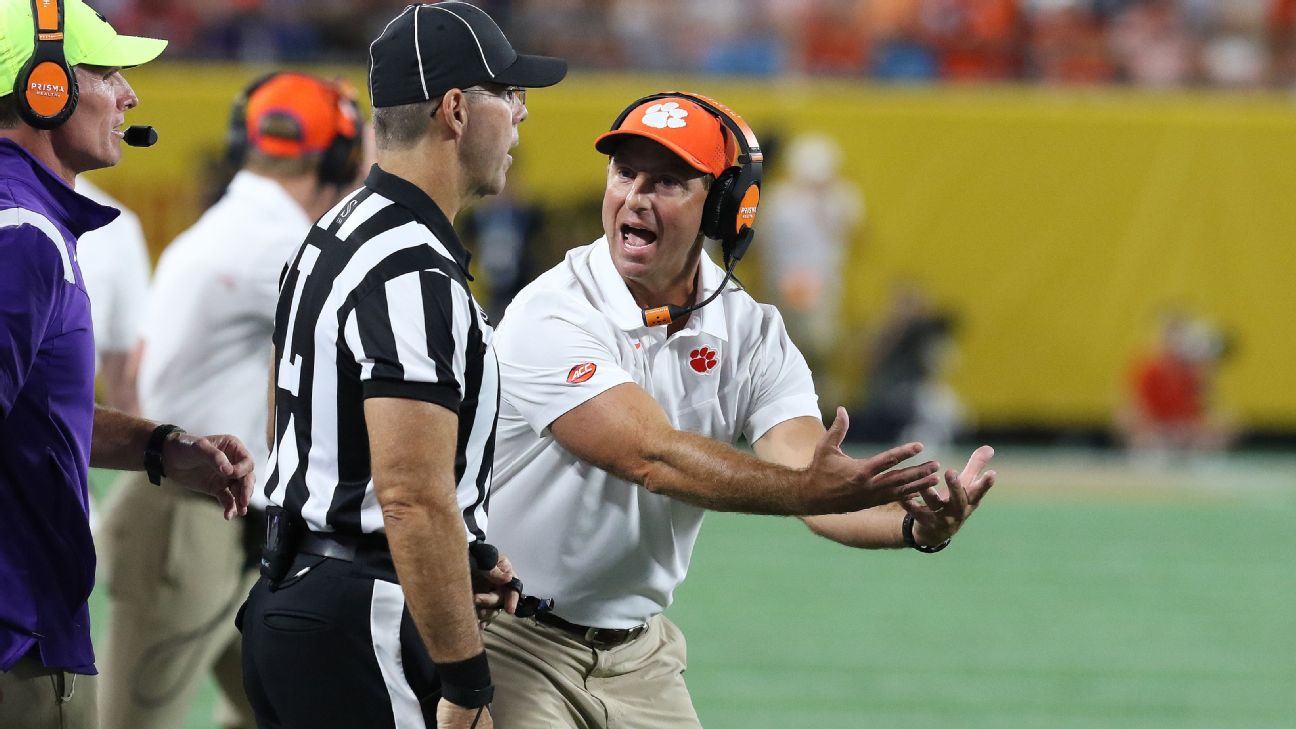 No one will beat Alabama. Clemson's dynasty is dead. UCLA is the best in the West. Georgia's offense can't score.

If College Football Playoff national championships and the Heisman Trophy were handed out after Week 1, Georgia wouldn't have a 41-year title drought and we'd be watching former Texas A&M quarterback Kenny Hill in those Heisman House commercials every weekend.


Instead, the college football season will play out from now until early December to determine the playoff participants, and everything we think we know will be settled between now and then.

Here are a few overreactions from the opening week:

Alabama is as good as last year

Clearly, the Crimson Tide looked like the best team in the FBS, but it's too early to crown them national champions again. The Hurricanes were probably ranked too high in preseason polls, especially with quarterbackD'Eriq Kingcoming back from a serious knee injury. Blowing out nonconference opponents in neutral-site games to open a season is what Nick Saban-coached teams do. It would have been like telling Eddie Van Halen he would've needed to prep for Guitar Hero. No matter how much and how hard you practice, you're going to get shredded.

Alabama will face a couple of tricky SEC road games against Florida (Sept. 18) and Texas A&M (Oct. 9). An Oct. 2 home game versus Ole Miss might be more dangerous than expected if the Rebels really are better on defense.

The ACC's playoff hopes are dead

My colleague Andrea Adelson and I discussed a doomsday scenario for the ACC last week: Clemson loses to Georgia, North Carolina falls at Virginia Tech, and Alabama and Ole Miss hammer Miami and Louisville, respectively. Unfortunately for the conference, all of those things happened opening weekend, and it was actually worse. Georgia Tech fell to Northern Illinois, which didn't win a game in 2020. Duke lost to Charlotte, which had never beaten a Power 5 opponent. When does basketball practice start?

Clemson, which has won six consecutive ACC titles and played in every CFP since 2015, faces an uphill battle in getting back to the top four. The Tigers' remaining nonconference schedule (FCS program South Carolina State, woebegone UConn and rebuilding South Carolina), combined with not playing Miami, North Carolina or Virginia Tech in ACC crossover games, might leave them behind a two-loss team even if they win out.

As bad as the Tigers looked, though, it's silly to say coach Dabo Swinney's dynasty is over. Other than Alabama, no one has been better over the previous six years. But the way Georgia's defense manhandled Clemson's offense line, sacking quarterback D.J. Uiagalelei seven times and limiting the Tigers to only two rushing yards, has to be concerning. The Tigers were the first team that went toe-to-toe with the Crimson Tide and won when it mattered most. This season, however, the Tigers don't look nearly as fast, strong or physical as Alabama or Georgia.

The Pac-12 title runs through L.A.

The perception coming into the season was UCLA's Chip Kelly and USC's Clay Helton were on the hot seat. After just two weeks, the Bruins look like the best team in the Pac-12, and the Trojans might be right behind them.

Given LSU's struggles on both sides of the ball last season, UCLA's 38-27 victory at the Rose Bowl on Saturday night wasn't that surprising. In fact, I called it last week. What was stunning was the Bruins' ability to run over the Tigers at the line of scrimmage. UCLA's running backs averaged 7.3 yards per carry; LSU's averaged 2.3. The Bruins piled up 470 yards of offense, including 210 rushing. The defense was more physical too. Even more alarming for the Tigers: They were flat-out outcoached.


Meanwhile, the Trojans struggled through the first three quarters before scoring 17 points in the fourth to pull away with a 30-7 victory against San Jose State. USC's ground game was encouraging: The Trojans ran for 160 yards after finishing dead last in the Pac-12 in 2020 (and 10th in each of the two seasons before that). Kedon Slovis completed 24 passes, half of which went to Drake London. He can't do it alone.

Oregon didn't look great in a 31-24 victory versus Fresno State, and star defensive endKayvon Thibodeaux's availability for Saturday's showdown at Ohio State is in question because of an ankle injury. Oregon starting weakside linebacker Dru Mathis is definitely out with a left knee injury. As sloppy as the Ducks looked in the opener, they'll probably still have some say in the Pac-12 race.

Texas is the best team in the Big 12

The Longhorns couldn't have asked for much more in coach Steve Sarkisian's debut, a 38-18 victory against Louisiana. Texas'Hudson Card passed for 224 yards with two touchdowns in his first start, Bijan Robinson had 176 yards of offense (it's amazing what happens when you actually give him the ball) and the special teams were solid -- aside from a block in the back that wiped out an early 83-yard punt return for a touchdown. In many ways, the mistakes and boneheaded decisions that plagued the Longhorns during the Tom Herman era were gone.

Of course, declaring the Longhorns "back" after one game is like busting out a new turnover chain when you're down 27-0. Even Las Vegas oddsmakers are withholding judgment: Texas is only a six-point favorite for Saturday's game at Arkansas (7 p.m. ET, ESPN and the ESPN App). Remember, we've been here before with UT.

Quarterback Spencer Rattler, the preseason Heisman Trophy favorite, threw two picks, and the Sooners were outscored 21-3 in the second half to narrowly survive against Tulane 40-35.

The good news? Rattler completed 30 of 39 passes to nine different players. Running back Kennedy Brooks averaged 6.2 yards per carry. The Sooners had a 23-point lead at halftime. The defense had four sacks and hit quarterback Michael Pratt five more times. The Sooners will play four more times before their Oct. 9 showdown against Texas in Dallas, so there's plenty of time to improve.

Iowa State's 16-10 victory against FCS opponent Northern Iowa was even more perplexing. What worried me about the Cyclones' lofty preseason expectations is that they never had to deal with them before. Typically, when a program like Iowa State jumps up and wins big and plays in a New Year's Six bowl, everybody, including the head coach, leaves (see UCF and Scott Frost). But coach Matt Campbell stuck around. So did quarterback Brock Purdy, tailback Breece Hall and tight end Charlie Kolar.

Given Iowa State's history of slow starts, we probably shouldn't have been surprised it was so sluggish out of the gates. Campbell's teams are 8-11 in August and September. In 2020, the Cyclones opened with a 31-14 loss to Louisiana. They needed three overtimes to beat Northern Iowa 29-26 in the 2019 opener and started 1-3 in 2018.

Iowa State rebounded to finish 9-3 and reached the Big 12 championship game last season. TheCyclones will have to bounce back again for Saturday's home game against Iowa (4:30 p.m. ET, ABC and the ESPN App). The rivalry matchup has been the biggest shortcoming in Campbell's tenure, as his teams are 0-4 against the Hawkeyes.

Ohio State will finally be challenged in the Big Ten

The Buckeyes are 16-0 against Big Ten foes under coach Ryan Day after surviving with a 45-31 victory at Minnesota in the opener. Ohio State quarterback C.J. Stroud overcame nerves to throw for 294 yards with four touchdowns in his first start, running backs Miyan Williams and TreVeyon Henderson displayed big-play speed, and wideoutChris Olave was once again smooth as silk.

But Ohio State's defense, with seven new starters, showed some growing pains. Gophers running back Mohamed Ibrahim ran for 163 yards with two touchdowns before leaving with a season-ending leg injury late in the third quarter. Minnesota ran for 203 yards and controlled the clock for nearly 39 minutes.

It was an alarming sign for a defense that wasn't that good in 2020. Then again, the Buckeyes played without starting cornerbacks Cameron Brown and Sevyn Banks and started two freshmen in their absence. Safety Josh Proctor also was hurt against Minnesota. On Tuesday, Day declined to comment on their availability for the Oregon game.

Will someone finally challenge the Buckeyes in the Big Ten?

Michigan State might have been the league's biggest surprise in Week 1. The Spartans blasted Northwestern 38-21 on the road. Wake Forest transferKenneth Walker IIIran for 264 yards with four scores.

Michigan gave its starving fans reason for hope with a 47-14 rout of Western Michigan. The loss of wide receiver Ronnie Bell to a season-ending knee injury won't help.

Even more impressive, Iowa's defense dominated Indiana in a 34-6 rout, limiting the Hoosiers to 77 rushing yards and intercepting three passes.

Penn State's defense was nearly as good in a 16-10 win at Wisconsin. The Badgers had four scoreless trips inside the Nittany Lions' 25, including three inside the 10. The Lions had only one first down before halftime and managed just 50 rushing yards. There's still work to do on offense before Penn State plays at Ohio State on Oct. 30.

Quarterback JT Daniels might have only been half-joking when he told reporters after a 10-3 victory versus Clemson that the Bulldogs will only have to score four points to win because their defense is so good. As good as Georgia looked on defense, its offense left a lot to be desired, albeit while playing against one of the best defensive lines in the FBS.

The Bulldogs held up well in pass protection, allowing the Tigers to sack Daniels only once, but the plan was for him to get rid of the ball quickly with short passes. When Georgia needed to run the ball to preserve its slim lead late in the fourth quarter, the Bulldogs rushed nine straight times to run out the clock.

Georgia was playing without several of its top pass-catchers, including wideoutsGeorge Pickens (knee),Dominick Blaylock(knee), Kearis Jackson (knee) and tight ends Darnell Washington (foot) and Arik Gilbert (personal reasons). Pickens and Gilbert aren't expected to return anytime soon, but the others should work their way back into the lineup. Until then, the Bulldogs will continue to rely on their defense and their running game to win. 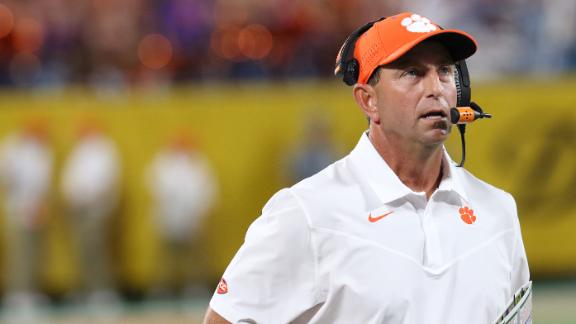