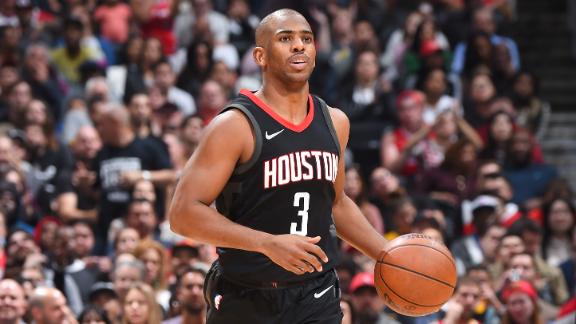 Such was the mixed reaction to the return of Paul, who was arguably the best player in the Clippers' mostly miserable history but opted to leave Los Angeles to join the Houston Rocketslast summer.

The boos weren't the reason it was a disappointing return for Paul, as the injury-ravaged Clippers handed the Rockets a 113-102 loss.

Paul, who received polite applause after a tribute video was shown on the arena's big screens during the first timeout, finished with 19 points, six rebounds and seven assists before checking out with 1 minute, 13 seconds remaining and the game out of reach.

Clippers guard Lou Williams, one of seven players the Rockets traded along with a first-round pick to get Paul, was the most impactful player in the game. Williams, who is making a push for his first All-Star selection, scored a game-high 31 points on 12-of-18 shooting and recorded nine assists.

Paul got in the face of Blake Griffin, his former co-star in L.A., after Griffin and Houston coach Mike D'Antoni had a heated exchange that led to double technical fouls in the fourth quarter. Griffin, who had 29 points, 10 rebounds and six assists, was ejected with 1:03 remaining after drawing another technical foul for a confrontation with Rockets forwardTrevor Ariza, who was also ejected.

"Chris was great for us, but Chris decided to leave us," Clippers coach Doc Rivers said. "He's no longer a Clipper. We don't talk about it."

Paul's arrival in 2011 made the Clippers relevant for the first time in years. The Clippers, who made only four postseason appearances in their first 33 years, went to the playoffs all six seasons of Paul's tenure but never advanced past the second round.

"It'll haunt me forever, because we were close. The Oklahoma series, I thought that changed our fortune. Then we followed it up with the Houston debacle. You can't get those back."