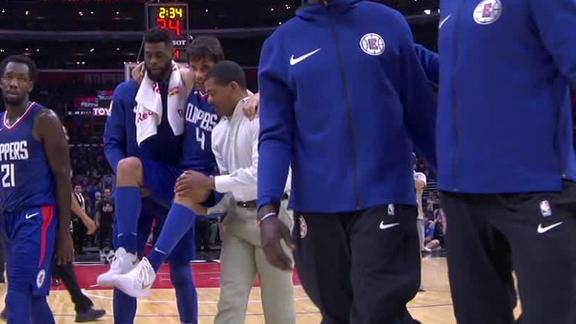 LOS ANGELES -- Clippers rookie guard Milos Teodosic left Saturday's home opener against the Phoenix Suns with a left foot injury and will not return, the team announced just before halftime.

X-rays were negative, and Teodosic will undergo an MRI on Sunday to learn the severity of the injury, coach Doc Rivers said.

"We have to wait until then," Rivers said. "I just saw him laying down. I didn't see what happened. He said that he felt something in his foot. So it's definitely a foot injury. But we don't know what it is."

Teodosic, who finished with five points, was injured going for an offensive rebound following a missed three-pointer by Danilo Gallinari with about 2:40 left. Teodosic immediately pulled up lame, collapsing near the courtside seats while the Clippers weren't able to stop play until after Suns guard Devin Booker scored a layup to cut the Clippers lead to 50-39.

The Clippers immediately called timeout with 2:34 left in the second quarter, with head trainer Jasen Powell and Rivers going over to check on Teodosic, who stayed down. Teodosic tried to stand on his own, but couldn't take more than a few steps before being carried off into the locker room.

He was on crutches after the game.

"Milos is never in bad spirits, you know? He really isn't," Rivers said. "He's down, because he obviously came over here to play basketball, not to be injured. So let's just hope that he's not."

The Clippers started Austin Rivers in the second half in place of Teodosic, who left the game with five points and two assists in just over 10 minutes.

Rivers said after the game that they would have to activate rookie Jawun Evans.

"Hopefully it's not bad, but if it is, the next guy is getting ready to step up," DeAndre Jordan said. "That's why we're so deep. We got a lot of guys who can play. Hopefully he can be OK."

Added Patrick Beverley: "I think we have some of the best trainers in the league, so I'm pretty sure (Teodosic) is going to come back healed up as soon as possible. But between then, we gotta hold down the fort without him."

Teodosic, 30, signed with the Clippers this offseason after playing overseas in the Europe. He had six points and six assists in LA's win over the Los Angeles Lakerson Thursday.