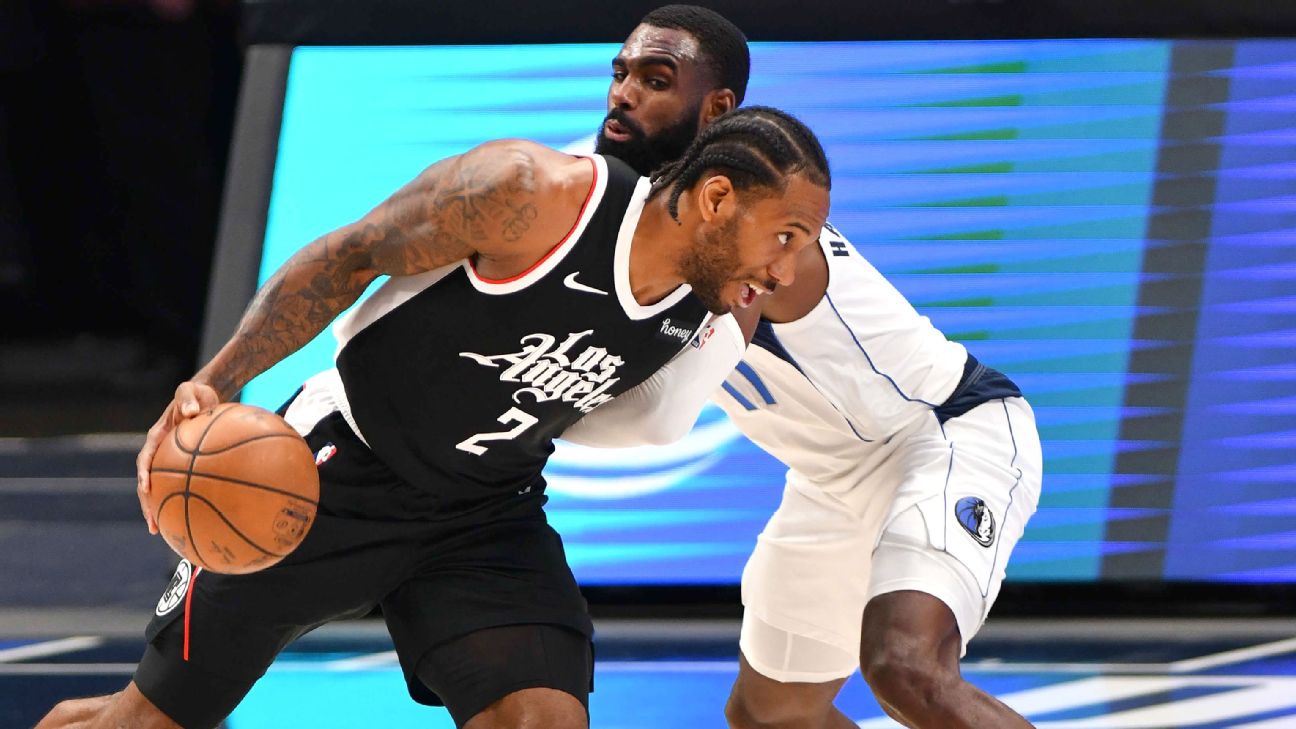 The LA Clippers arrived in Dallas down 0-2 in the series with their future clouded in uncertainty, but they left with home-court advantage and momentum thanks to Kawhi Leonard and Paul George playing the relentless style they envisioned when they joined forces.

For the second straight game, Leonard and George overwhelmed Luka Doncic and the Dallas Mavericks, combining to score 45 points in the first three quarters to help the Clippers even this Western Conference first-round playoff series at 2-2 with a 106-81 rout on Sunday at American Airlines Center.


The Mavericks could not contain Leonard for the third straight game, as the All-Star forward made 11-of-15 shots and tallied 29 points and 10 rebounds. And George scored 13 of 20 points in the second quarter, when the Clippers opened a 48-29 lead with 6:58 left before halftime.

"I think we both have just done a great job of complementing each other," George said of him and Leonard leading the Clippers back into this series. "[Leonard] has been all-out driving and attacking and putting pressure on their bigs at the rim. Myself, as well. When he needs a break and a breather, now I am in attack mode. I think we are just doing a great job of countering each other.

"This is ultimately what we wanted to get to -- being able to share the court together and doing it on both ends together."

This was what Leonard, George and the Clippers envisioned when the two All-Stars became Clippers during the summer of 2019.

Leonard is playing at the postseason level that made him the NBA Finals MVP for a second time when he led theToronto Raptorsto a championship in 2019. He has been simply too strong and powerful for Dallas to stop, averaging 35.3 points in the past three games.

In leading the Clippers to the past two wins in Dallas, Leonard shot 24-for-32 combined in Games 3 and 4, and he has done the majority of his damage on drives into the paint.

But his message to the Clippers after they lost the first two games of the series at home was to step things up considerably on the defensive end. Doncic labored through a nerve issue in his neck on Sunday and shot 9-for-24 to finish with 19 points, six assists and six rebounds. But the Clippers were thrilled with their ability to slow down the Mavericks' other shooters who really shot lights out in Los Angeles.


Tim Hardaway Jr.missed 7 of 8 shots and scored just four points, Dorian Finney-Smith only had eight points and the Mavericks as a group missed 25 of 30 3-point attempts in Game 4. In the first two games of the series, Dallas took home-court advantage by making 35 of 70 (50%) attempts from behind the arc.

Since trailing 30-11 with 4:38 remaining in the first quarter of Game 3, the Clippers have outscored Dallas 213 to 159. Now, the Mavericks are the ones who have to find a way to turn things around or their season couldquickly come to an end.

"We responded well," Leonard said of the team heeding his message to play better defense. "Especially coming back from that [30-11 deficit] in Game 3."

"The job is not done yet," he added, "so we got to keep having that even-keeled mindset and get ready for the next one."

The Clippers have pushed all the right buttons since they left Los Angeles, where they had no answer for Doncic. Clippers coach Tyronn Lue went to a small lineup and insertedNicolas Batumin for center Ivica Zubac when the Mavericks started off Game 3 hot. The move allowed the Clippers to be able to switch defensively on Doncic, who had his way scoring with Zubac in front of him.

Lue began Game 4 with Batum in the starting five for Zubac, and the veteran forward responded with 10 points, five rebounds, four steals and two blocks. Batum said he studied film of Draymond Green and Boris Diaw in preparation on how to best use versatility as an undersized center.


With Batum helping on defense and moving the ball on offense, Leonard kept punishing the Mavericks with his drives, making his first five shots and scoring 10 points in the first quarter. George then took over in the second quarter.

Doncic tried to keep his team in it and had 15 points at the half, but Kristaps Porzingis,who finished with 18 points, was the only other Maverick to score in double figures in the first half.

The Clippers pushed their lead to 79-51 with 4:42 left in the third, as they took home-court advantage and all the momentum in this series back with them to Southern California.

Lue said the Clippers would show who they truly are in Game 3 with their backs against the wall. They backed his vow, as Batum said the Clippers never panicked despite being down 0-2 in the series and trailing 30-11 in the opening minutes of Game 3.

"I mean, we knew our mistakes," Batum said. "We just had to adjust. We knew what we had done wrong." 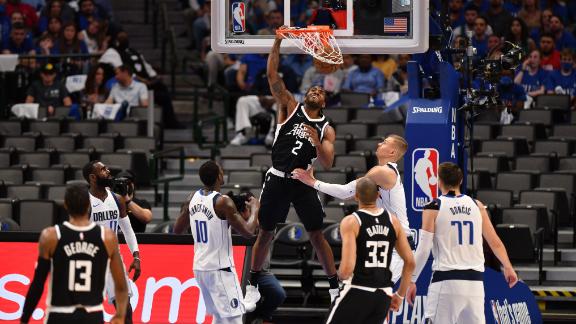