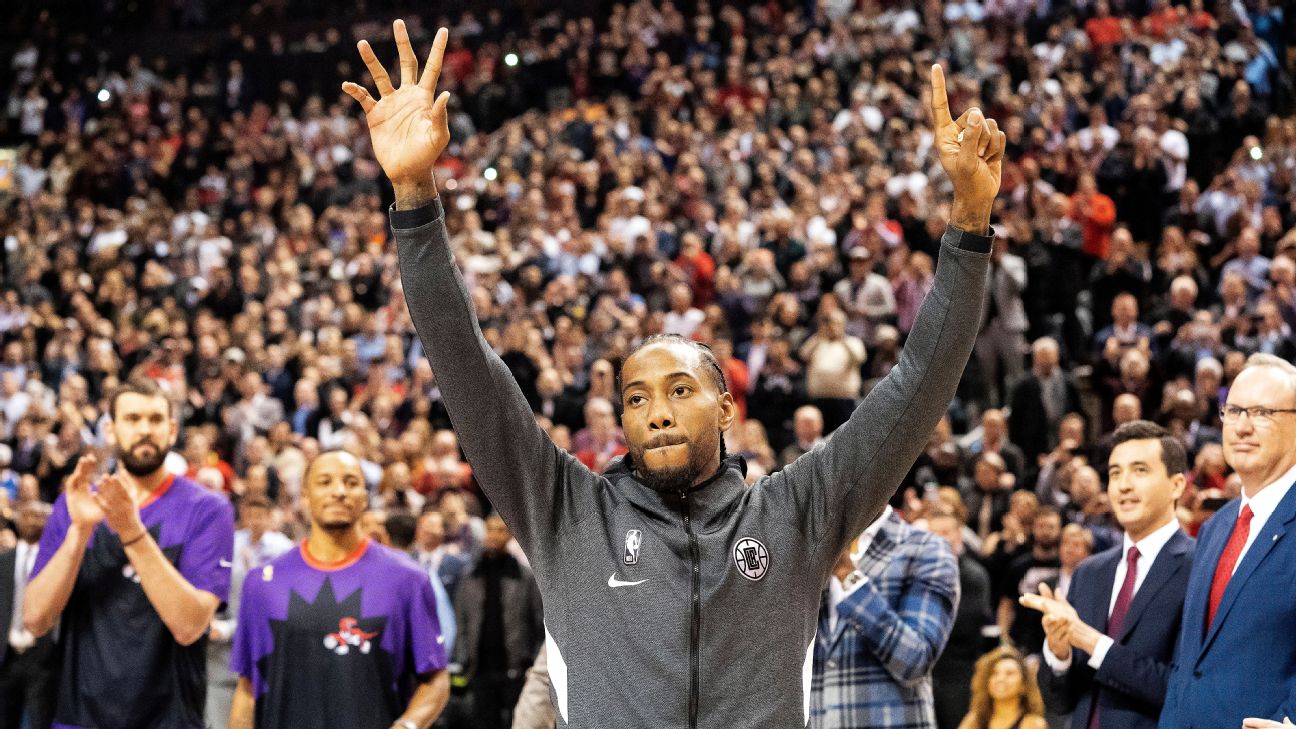 ESPN
By Ohm Youngmisuk
TORONTO --Kawhi Leonard's night began with the entire Scotiabank Arena crowd on its feet and showering him with "MVP" chants.

And his triumphant return to Toronto ended with a 112-92LA Clipperswin over the Raptors, withthe NBA Finals MVP having one final championship moment here as he shared the unique message he had engraved inside his new championship ring.

"I have a logo in there," Leonard said when asked at the end of his news conference about the engraved message. "And [the ring is sized for] my middle finger, so it reminds me 'put it on my middle finger.' So I have like a 'FU' symbol in there."

Leonard said it matter-of-factly as reporters got a good chuckle. A Raptors source confirmed to ESPN's Tim Bontemps that there is a logo engraved inside the ring, but wouldn't specify what it was.

While he didn't show much emotion on this historic night for Toronto, Leonard clearly felt the love from a fan base that came to thank him.

Leonard delivered the type of well-rounded performance the Toronto fans saw plenty of last season as he hit 8 of 14 shots and finished with 23 points, six assists and five rebounds. He admitted on the morning of his return that he gave serious consideration to coming back before opting to return to his Southern California roots and sign with the Clippers as a free agent.

But he had flashbacks of last season as he rode to the arena for shootaround, and many memories were shown to him on the big screen before tipoff as Raptors fans got to celebrate the historic season with the star who delivered Canada its first NBA championship.

After public address announcer Herbie Kuhn introduced the four other Clippers players in the starting lineup, the Raptors showed a nearly two-minute video tribute revisiting highlights from Leonard's title run. At one point, the lights went out with just the play-by-play heard of Leonard's winning shot in Game 7 against Philadelphia in the Eastern Conference semifinals, before video showing the reaction of Leonard screaming.

"It's like Maximus coming back as the gladiator," Clippers coach Doc Rivers said before the game. "He was the champion and just did everything honorably and the right way. I was joking earlier that would be a great intro."

During the time that the arena went dark, the Raptors retraced Leonard's steps toward that corner shot with footprints lighting up on the court while the play-by-play was being played.

Leonard then was introduced to a standing ovation as he was greeted at halfcourt by his former Raptors teammates and coaches as fans chanted "MVP."

Raptors point guard Kyle Lowry was the last former teammate waiting to greet Leonard, with his championship ring in tow. Just before hugging Lowry, Leonard shared one more personal moment with his good friend by rubbing his eyes just before accepting his ring, which has the most diamonds of any championship ring -- more than 640.

"I was joking with him and just showing him that the ring was nice and like it was shining too bright," Leonard said. "And we were laughing."

Leonard then acknowledged the fans, raising his hands in the air. Kuhn then said over the microphone, "Congratulations, Kawhi! The North thanks you."

"Some players just don't let you in," Rivers said after the game. "But I can tell you that ovation, to him, was very heartfelt. There's no doubt about that. It meant a lot to him."

"I thought what the Raptors did overall -- the video, the players coming out, all of them who played with him -- that's the best that I've seen since I've been in the league," Rivers continued. "That's a really classy move by the organization and then by the fans as well."

Leonard and his sponsor, New Balance, put up a large billboard in the city, thanking Toronto. And the Raptors organization also had billboards up around town celebrating Leonard's return to Toronto.

After the Clippers held on to beat the Raptors in a game they led by as many as 24, Leonard sat in the visitors locker room and took time to admire his second championship ring and reflect on his memories from last season.

"As far as winning a championship, it pretty much has come full circle now," Leonard said. "Being able to get the ring and see where the hard work came from. But it's more than that. ... It's just a journey. For me, as far as playing for the city, the chapter coming closed once I came over with the Clippers, but still love the city. Those guys on the team, the players, the coaching staff, still have love for them and wish them the best."

"[The video and the fans] just kind of puts you back in those spots when you were on the floor, or the locker room talk going into the game, and after the game watching those highlights," he added. "It was a special season for us, for me and for the whole city and country. I'm just glad we were able to win. It was a blessing." 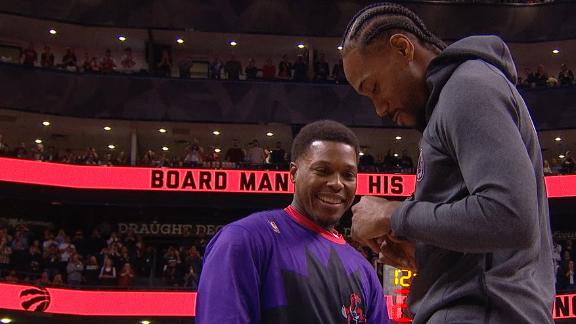 Kawhi accepts his Finals ring, showered with cheers in Toronto return
The Raptors pay tribute to Kawhi Leonard with a pregame video and award him his 2019 NBA championship ring. 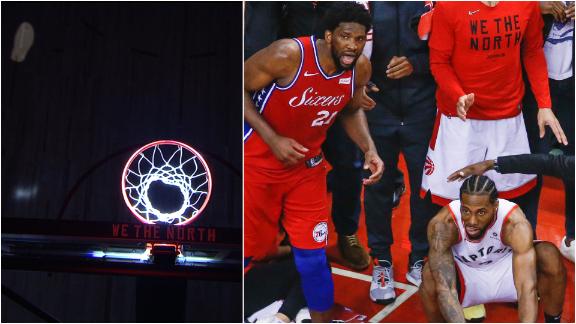 Raptors retrace Kawhi's steps on 'the shot heard 'round the world'
The Raptors take a trip down memory lane by retracing Kawhi Leonard's steps on his game winner against the Sixers as a part of a tribute video in his return to Toronto.
Report a correction or typo
Related topics:
sportsespnnewstoronto raptorskawhi leonardla clippersnba
Copyright © 2020 ESPN Internet Ventures. All rights reserved.
More Videos
From CNN Newsource affiliates
TOP STORIES