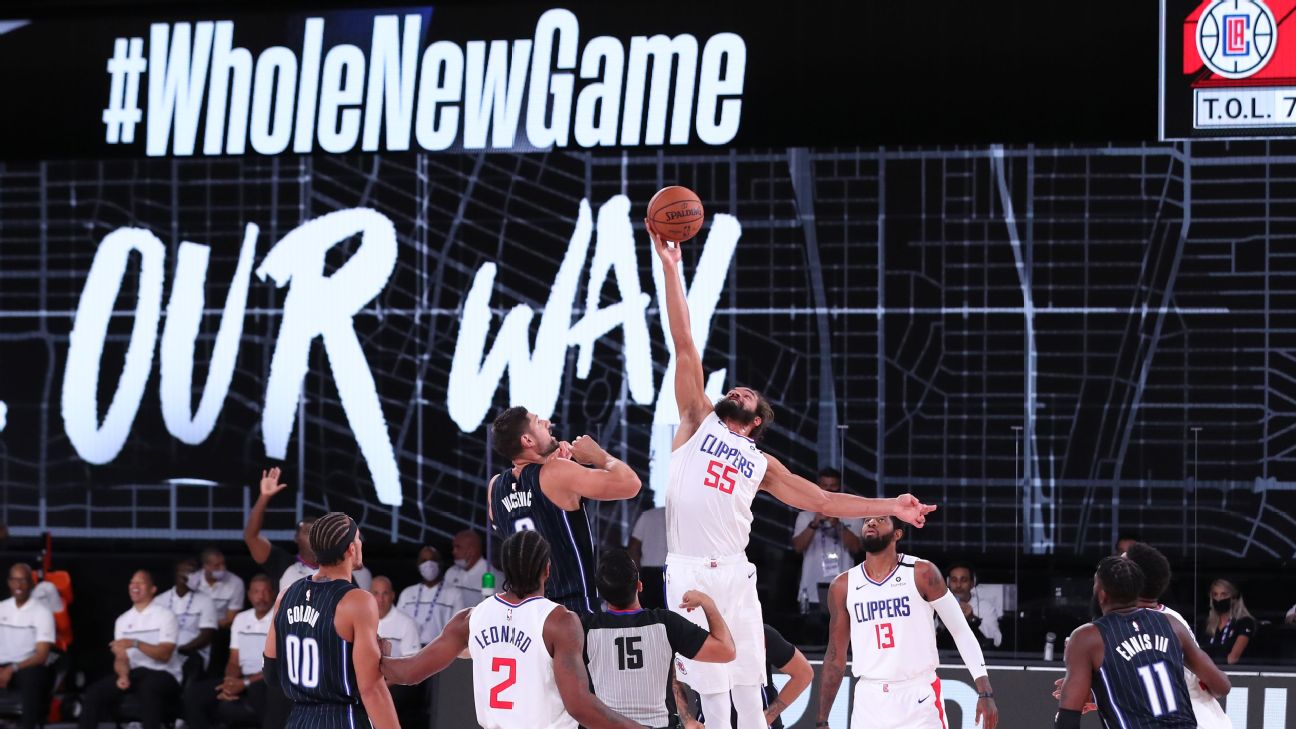 In the first NBA game played in more than four months, LA Clippers guard Lou Williams sat in the team's socially distanced bench area Wednesday and noticed the new atmosphere around him.

The 2019-20 season is on again, as the Clippers andOrlando Magicgot the season restart underway with the first of four scrimmages at the Walt Disney World Resort in Orlando, Florida.


Williams, the reigning Sixth Man of the Year, heard the familiar voice of the Clippers' home public address announcer, Eric Smith, after every made basket and the in-game music played at Clippers home games, including the "DE-FENSE" chant. He also saw the Clippers' digital signage, such as one that read "LA Our Way," and players' likenesses all over the large LED boards surrounding the court to give it a more intimate feel.

But then there was the odd sight of an NBA game at "The Arena" void of fans.

"I heard the 'defense' chants, but once I was actually on the floor, I didn't hear it, I didn't feel it, I didn't see it. I was locked in to the game," Williams said. "I don't know who that [in-game] experience is for because there are no fans in the arena, but it definitely went well."

Plus, there was the unusual sound of this NBA scrimmage.

Welcome to the new normal in the NBA, at least for the next four months.

The Clippers -- playing without Patrick Beverley, Montrezl Harrell, Landry Shamet and Ivica Zubac -- beat the Magic 99-90. But the final score was meaningless. The scrimmage was about the first trial run of a basketball game on the NBA campus.

Clippers coach Doc Rivers had three assistant coaches sitting alongside him, though they were socially distanced. Rivers and Orlando coach Steve Clifford had three rows of socially distanced assistants and staff members wearing masks seated behind them, and the nearby scorer's table had a large shield between the table and the court.

It didn't take long for Rivers to realize that without fans, he didn't need to stand up and raise his voice to call out plays or talk to referees like he does usually.

"Maybe I will have a better voice by the end of this," he said. "Who knows?"


Coach Luke Walton, whose Kings played in the final scrimmage Wednesday night, said the noise -- or lack thereof -- will be something to get used to.

"I think offensively and defensively is the difference," Walton said. "Defensively, we want to talk, we want to be loud with all of that. Offensively, I think you look at vet point guards around the league -- guys like Chris Paul -- and I think with some of those habits they've built where they kind of just, when they know what play they're running they walk up to each teammate and kind of whisper in their ear, I think little things like that are going to be really valuable here. Because any bit of noise, you can definitely hear it. So offensively, you're going to definitely want to be more on the quiet side. Defensively, you're going to want to be loud and calling out coverages and calling out the other team's play if you can hear it."

For months after the coronavirus pandemic brought the sports world to a halt, many wondered how an NBA game would look amid a pandemic. So far, the plan in place is working. Two days after the NBA and National Basketball Players Association announced that there were no positive tests for the coronavirus out of 346 players tested since July 13, the NBA had its first day of action, with four scrimmages.

"I thought it was much more comfortable than I thought it would be," said Clifford, who talked with Rivers before the game about things such as playing more zone defense in this scrimmage to help each team prepare for the upcoming restart. "I think the teams that can adapt to playing in a unique kind of different environment without all of the fans, whoever can get the right mindset so they can just concentrate on playing, will have a big advantage.

"But the NBA has done an incredible job the way they've organized everything and set it up to be as comfortable as possible for the players."

The Clippers and Magic started it off, and play was initially sloppy. Players tried to get their basketball wind back after months of running on treadmills and local tracks.

"Lou was saying, 'Man, I've been running my butt off for two months, but it is nothing like the game,'" Rivers said of Williams, who led all scorers with 22 points. "You could see the first three or four minutes, everyone was tugging. They were a little tired. The wind will catch up quickly. I think the rhythm will come."

Orlando's Nikola Vucevic needed some time to get used to playing in a non-NBA arena with no fans.

"It was a little weird, but overall, the NBA did a great job," said Vucevic, who had 18 points and 10 rebounds. "They put a bunch of screens in the arena, making the arena dark around us so it doesn't feel empty, so there's something going on. It was pretty good for a first game but not too bad overall."

Vucevic noted that the players' bench area is three rows of socially distanced seats for players when they are not on the floor, as opposed to the normal single bench courtside. Kawhi Leonard and other Clippers players had designated seats with their names on them.


"It's obviously different because depending on where you are sitting, it's kind of hard to be as involved in what's going on as you usually [are] when you are sitting right there on the court," Vucevic said. "So it's a little different, but with everything going on, the NBA wants to make sure to take the precautions and set the example to the rest of the world that if we can do it here, we can do it everywhere."

Kings guard Buddy Hield also was complimentary of the league.

"We would like to be more together [on the bench], but I understand the NBA's protocols and what they're doing. They're enforcing the social distancing. So, I respect that," he said. "But I think the NBA did a really great job setting up the background and everything. I mean, it looks really great. There's a great scenery, and when the guys walk inside it's like, 'Yo, this is a really nice setup.' It looks kind of like a FIBA basketball tournament when you're just out there and you're just playing. That's how it looks. All the logos and everything, the 'Black Lives Matter' was dope on the court and the screens. I think the NBA did a really great job of that. Shoutout to them."

Once the game started, Williams and Rivers said the atmosphere fell into the background, and it felt like a basketball game.

"Once you get in between the lines, you can make a case that's probably as comfortable as the players will ever be, as normal as everything will ever be," Rivers said. "You could see that. You could see the rust and all that. For them, they were back in their natural habitat."

Some players, including Williams, were worried that the NBA restart would distract or drown out the fight for social justice and protests against police brutality, with basketball serving as entertainment. But the players played on a court that had "Black Lives Matter" written above the center court NBA logo.

"I am excited to be a part of a company that is standing along a lot of players that feel strongly about their beliefs," said Williams, who was "50-50" about coming to Orlando to play until Clippers players voted to all play as a team. "It is extremely important for Black Lives Matter to be on the floor. I'm just proud that we are part of it.

"I hope people understand the message that we are trying to get across: We are fighting for equality. We are going to continue to build, but I was extremely proud to see it."

ESPN's Tim Bontemps and Dave McMenamin contributed to this report. 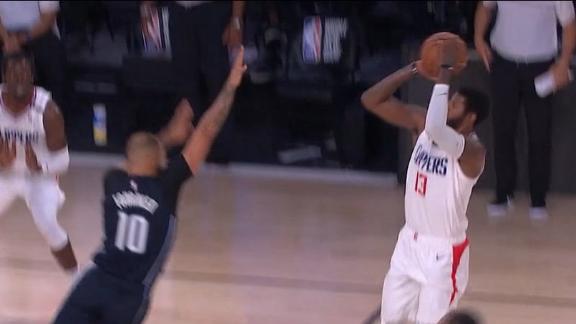