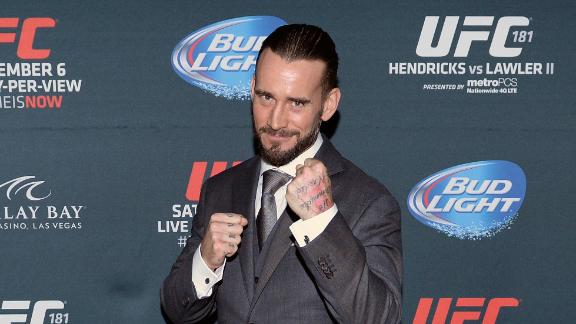 "This is my new career, 100 percent," CM Punk said in a statement. "I'm going to go full steam ahead, all systems go after today, and it's going to be fun."

The UFC took to Twitter to announce that CM Punk is expected to make his Octagon debut in 2015.

"He wanted to fight here," White told ESPN.com. "He wanted to give it a shot, so we gave him an opportunity. It's not like Brock Lesnar. We're not going to throw the kitchen sink at him. Lesnar had a wrestling background. [CM Punk] is going to fight a guy who is 1-0, 1-1, 2-1 -- something like that."

White did not have a firm 2015 date for CM Punk's debut, saying it could take some time, perhaps six to seven months. The UFC head noted that Brooks has been training jiu-jitsu and mixed martial arts for an extended period of time.

"He's been coming to fights for a long time and after his WWE contract was up, he called me and said he wanted to give it a shot. I said, 'All right. We'll give you a shot.' "

At 36, CM Punk acknowledges that time is not on his side.

"My professional wrestling days are over, it's awesome to be here," he said. "This is something I've wanted to do for a long time.

"I felt like it was now or never. I have a limited window most fighters don't have. I'm either here to win or get my ass kicked."

In addition to Lesnar, who went 5-3 over his MMA career, other WWE stars have tried their hands in mixed martial arts, including Dave Bautista (1-0) and Bobby Lashley (12-2).

UFC women's champion Ronda Rousey took to Twitter to show her excitement with the latest addition to the promotion.

Several UFC fighters were nowhere near as thrilled, however, with some volunteering to be the former wrestler's first opponent.

A skeptical Nate Diaz, ESPN's 10th-ranked lightweight fighter, had one simple question, though.