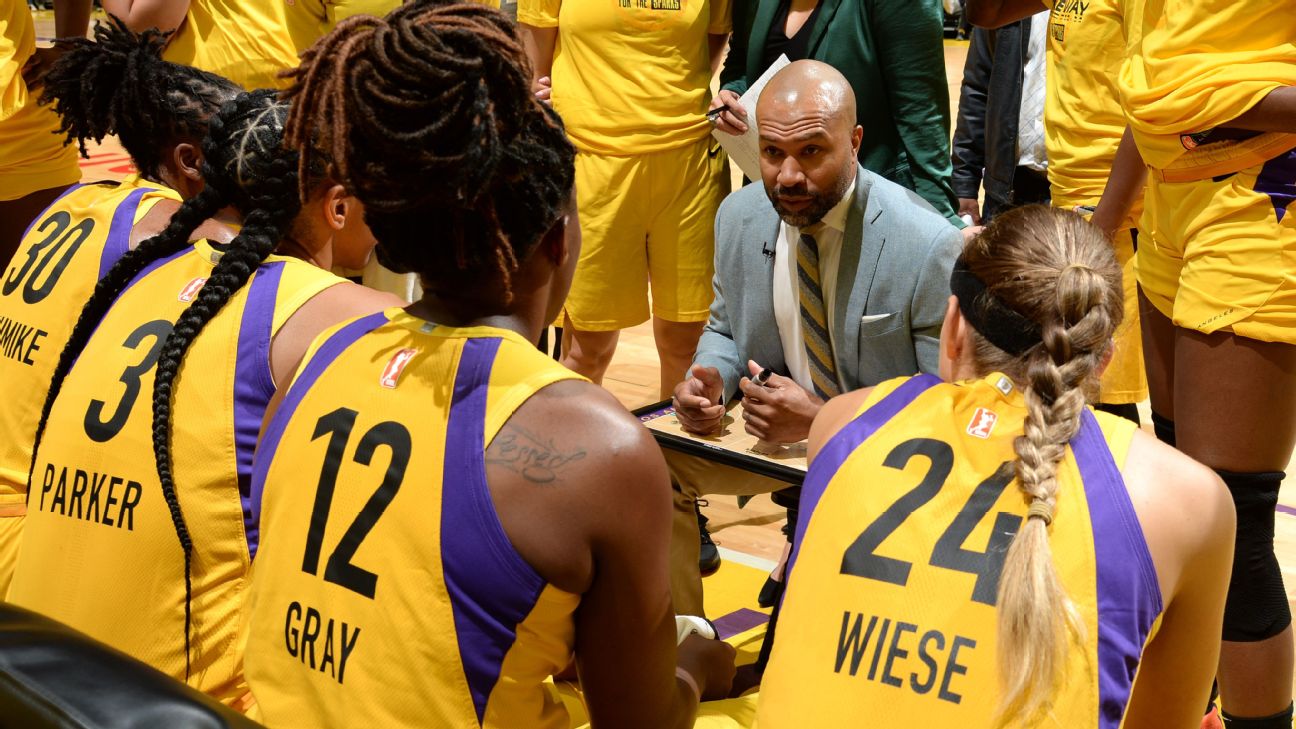 LOS ANGELES -- Derek Fisher is a journaler. As in, journaling. Writing things down. Thinking things out on paper. Processing. Planning.

It helps to write when you're a young coach and 25 things pop into your head at once as the game is going on. As a player, Fisher could process all that on the fly and execute it on the court. It's how he made an 18-year career in the NBA as a late-first-round pick of the Los Angeles Lakers out of Little Rock in 1996.

Fisher did a ton of journaling before he addressed the Los Angeles Sparks as their new head coach this spring. Thinking through what he would say. What his players needed to hear. The way he hoped they'd learn to play together. The WNBA championship he hoped they'd chase this season. A chase that continues Tuesday (ESPN2, 6:30 p.m. ET) when third-seeded Los Angeles plays the Connecticut Sun in Game 1 of the WNBA semifinals.

But when he stepped in front of his new team for the first time, before a practice this spring, Fisher knew only one thing mattered: He had to be real with them about his past.

"The first step I tried to take was to equalize myself and be very honest with the players about my life," Fisher said.

He talked about being fired by the New York Knicks, in his first opportunity as a head coach. He talked about coming back from that failure. About how grateful he was that the Sparks were interested in him, and how it made him realize he really did want to be a coach, after he rushed into coaching the first time because his mentor, Phil Jackson, came calling.

He wasn't trying to foist his NBA championship rings and résumé on them. Leading with swagger wasn't going to work here. Not with these women, who he figured would see through that. And not in this league, where the shortened season doesn't leave a lot of time for team- and relationship-building. No, he had to earn their trust fast. And the best way to do that was to acknowledge where he'd been, how humbling it was, and what this second chance at coaching meant to him.

"How I'm learning and I'm a work in progress just like every person," Fisher said, recalling his speech to the team. "I'm here with purpose, I'm not here on accident. I want to coach and work with them. I'm not just D-Fish on the way to something else. I'm here for a reason. When you think about how everything in life had to happen for this group of players to be on the Sparks at this time, and for me to become coach of the Sparks at this time, there is a purpose for all of that and I'm trying to see how far we can take that this year."

Sparks forward Chiney Ogwumike was new in town, too, acquired in a trade with the Connecticut Sun in the offseason. But Fisher's reputation as a five-time NBA champion preceded him. And this was not what she or her teammates expected to come out of his mouth on the first day of camp.

"I didn't know what to expect," Ogwumike said. "But I know I did not expect his vulnerability.

"He opened up about his personal life, his struggles, but then also his triumphs. ... He told us it was sort of like destiny. Life put him here. He's close to his family. He loves basketball. While he's adjacent to his legacy and the Lakers, he's with women who need respect. And he's always respected us."

When the Sparks rallied to beat the New York Liberty 78-73 in an early-season game in New York, Fisher confessed to the team how much he'd needed that win, and appreciated their effort in getting it.

"We were short-handed," Ogwumike said. "Candace [Parker] was injured. We had just got Chelsea [Gray] back, and we had to rally to win. It was by the skin of our teeth. After the game he was like, 'Y'all, I didn't want to talk about this before. But getting a win in New York ... I was so stressed going into the game because I really wanted to win, especially here.'"

That stuck with his players.

"Just knowing that his journey has not been easy as a head coach," Ogwumike said.

And it bonded them. They noticed when he opted to sit back in the economy section of the plane, with them, flying to road games. They appreciated that he noticed them carrying their bags to and from the bus. It's very different from the lifestyle he'd grown accustomed to in the NBA, where teams fly privately, where players sit in first class and never have to carry their own bags.

"I respect him for fully embracing his title," Ogwumike said. "When he goes around, he's the Sparks head coach. That's first."

After Fisher was fired as head coach of the Knicks in 2016, it wasn't clear which path his life would take. Or if he'd ever get another chance to coach. He dabbled in television with TNT and the Lakers network. He worked with Parker on TNT broadcasts.

But things had gone so poorly in New York, there weren't a lot of NBA teams knocking on his door. Which killed Fisher, because he felt like he was still learning how to be a head coach after rushing into it -- probably too quickly -- after his playing career.

"I was literally on the fence," Fisher said of the decision to retire as a player so he could coach the Knicks. "Had [Phil Jackson] not called, then more than likely the pursuit of a sixth NBA championship would have called my name more than trying to go into coaching or TV at that time."

Fisher took the Knicks job because he thought he'd be doing it for the next 20 years and had the time to grow into it. Less than two seasons into it, he was fired.

"I take my responsibility and hold myself as accountable as anybody," Fisher said. "But that was the toughest part about me exiting New York. Not that I got fired. Coaches get fired. It's that there really was the belief that the way we were trying to approach things as a staff, was what was causing the issue. There were much larger things in play, that are still in play there, affecting it.

"But the most important thing was what I learned from it."

He learned from it. By journaling. By owning the failures. But also by embracing this opportunity with gratitude.

"I'm just excited to be back on this journey," he said. "I just know that I'm better for the experience in New York. And I'm already better from where I was when we started with this team, to where we are now."
Report a correction or typo
Related topics:
sportsespnwnbalos angeles sparksespnw sportsespnw
Copyright © 2020 ESPN Internet Ventures. All rights reserved.
More Videos
From CNN Newsource affiliates
TOP STORIES