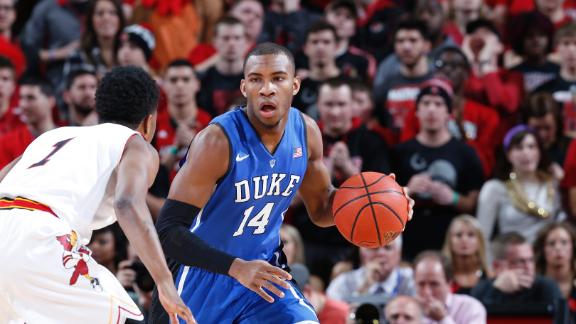 In a stunning announcement, Duke junior guard Rasheed Sulaimon was dismissed from the program on Thursday. The Houston native had not previously been disciplined, at least publicly, all season.

"Rasheed has been unable to consistently live up to the standards required to be a member of our program," coach Mike Krzyzewski said in a release. "It is a privilege to represent Duke University and with that privilege comes the responsibility to conduct oneself in a certain manner. After Rasheed repeatedly struggled to meet the necessary obligations, it became apparent that it was time to dismiss him from the program."

Sulaimon is the first player to be dismissed in Krzyzewski's 35 seasons as Duke coach, the school confirmed.

Last season the coaching staff talked to Sulaimon about his body language when things didn't go his way. He had specifically been called out for pouting and not celebrating his teammates while he was on the bench.

"It was an accumulation of a whole lot of residue," one source close to the Duke program told ESPN's Jeff Goodman. "It had built up over time.

"His talent does not outweigh his issues."

After Duke's win over Fairfield in November, Sulaimon was asked by ESPN.com about accepting his new role on the team. He started 50 games his first two seasons in Durham, but with the additions of Tyus Jones and Justise Winslow at essentially positions he could play, he would be required to come off the bench as a junior.

"This was something that I had to really look in the mirror and think about and I had to come to grips with because this team is really talented," Sulaimon said. "They're not going to need anything too extra or out of the ordinary. If you just do simple and just play hard you'll be successful."

Sulaimon seemingly had bought into his role this season coming off the bench and was developing into one of the Blue Devils' best on-ball defenders.

Sulaimon's absence could thrust freshman Grayson Allen into the lineup more. Allen, a 6-foot-4 guard, has averaged only 6.1 minutes per game in 16 appearances. Or it could simply expand sophomore Matt Jones' reserve role. Jones averages 4.7 points and also played in every game. Krzyzewski would often use Jones and Sulaimon in the same lineup as his top defenders. Sulaimon was valuable in a sense that he could also play point guard and run the offense if needed. Jones is not skilled in the same manner.

The No. 4 Blue Devils play at No. 2 Virginia on Saturday in what could almost be called a must-win game for their fading ACC regular-season title hopes. Wednesday's loss at Notre Dame dropped Duke to 4-3 in league play. The Cavs (19-0) are still undefeated through seven league games.