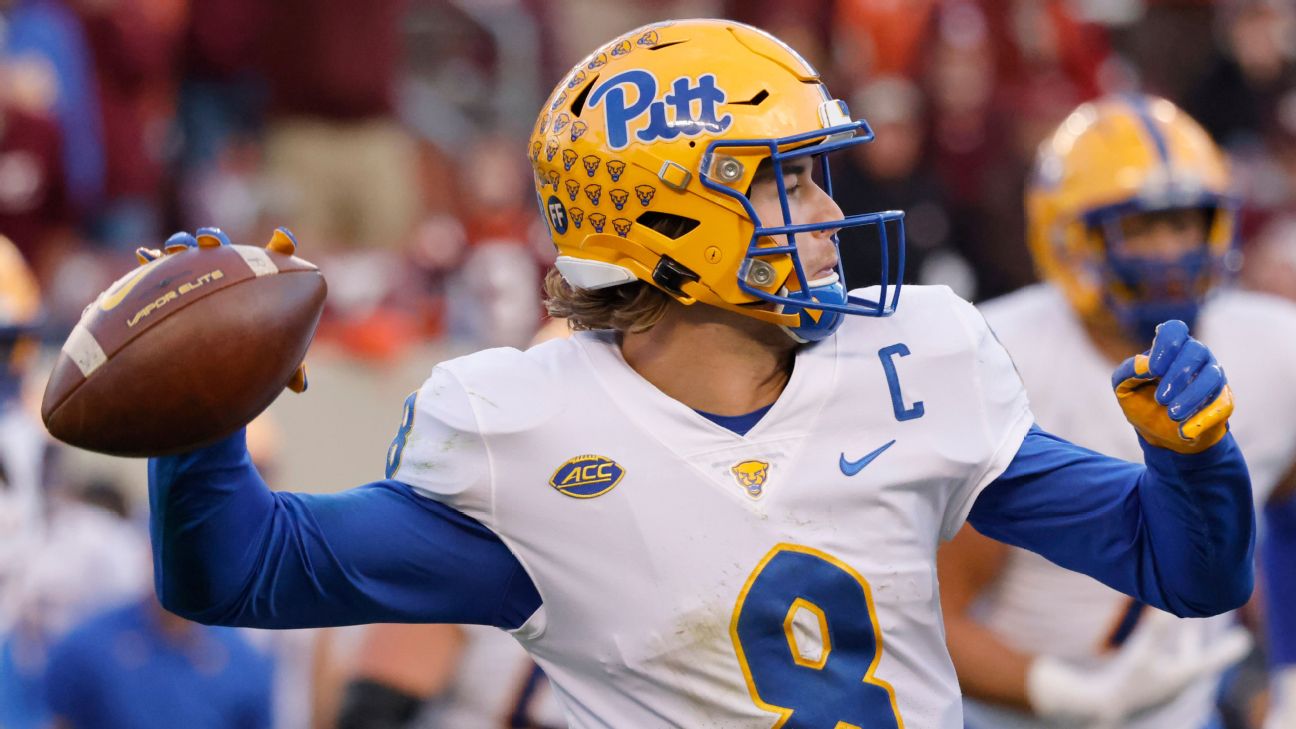 Pittsburgh quarterbackKenny Pickett is off to an exceptional start to the season, and he's worked his way into the Heisman conversation while putting the Panthers in the driver's seat in the ACC Coastal. Still, this is just a good QB having a great season, right?


Asked for a good comparison for Pickett among other QBs Venables has coached against over the years, the longtime Tigers defensive coordinator went big -- really big.

"We've seen a bunch of good quarterbacks over the years," Venables said, "but he's a lot like Joe Burrow from an experienced and calmness and accuracy and can run and makes all the right decisions and has a good complement of players around him and a good system that takes advantage of his skill set."

On first blush, this seems to go past high praise and into the category of gaslighting an opponent. But here's the thing: The comparison actually makes a ton of sense.

First, step back a year. In 2020, Pickett was a good -- if not at all flashy -- QB. He finished the season with 2,553 yards, 21 TDs and nine interceptions. Fine, but unspectacular. Then think of 2018 Burrow, nowhere near a Heisman candidate, who put up similar numbers: 3,293 yards, 23 TDs, five interceptions in four more games.

Then -- poof! -- a switch flipped and, in 2019, Burrow blossomed into a Heisman winner and the leader of college football's most explosive offense. And once again, the comparisons to Pickett aren't far off.

Sure, Burrow was a bit ahead at the halfway mark, but the margin isn't nearly as big as you might've assumed.

So, is Clemson staring down the barrel of another blowout loss to a Heisman winner, as happened in the Tigers' national championship game against LSU in 2020?

This is where things get tricky. Pickett's history against Clemson is wretched. In two prior games, he's just 26-of-55 passing (47.3%) for 217 yards (3.95 yards/pass) with two touchdowns and seven turnovers to go with nine sacks and just two plays of 20 yards or more.

The key to Clemson's past success was the blitz. The Tigers got pressure on Pickett often, and he averaged just 1.29 yards per dropback when the Tigers brought an extra pass-rusher. But this season, as good as Clemson's defense has been, it's gotten pressure on the QB just 32.7% of the time -- the lowest rate since 2014 -- and its sack rate of 6.6% would be the worst of Venables' tenure at Clemson.

The key for both Pickett and Clemson has been to go conservative. Pickett is completing 65% of his passes with 8 TDs and no picks vs. the blitz this year, success coming from quicker, shorter throws. Clemson, meanwhile, has played a bit less aggressively up front and, in turn, has limited big plays down the field. Maintaining that success on both sides requires some patience, however, and that might be the key to finding a winner Saturday.

"Kenny has to be patient," Pitt coach Pat Narduzzi said, "He's much more comfortable in the pocket than he was last year, and he can take some downfield shots. But [Clemson's defense] is really good and they're going to get after him."-- David Hale

"We want to be more aggressive," Brad Lambert, one of Purdue's three new co-defensive coordinators and the primary playcaller, told ESPN. "That was Coach Brohm's whole deal when I interviewed, and our whole presentation since we've been here."


The defensive makeover is fueling Purdue, which sits at 4-2 after last week's 24-7 road upset of No. 2 Iowa. The Boilers, who have won four of their last five against Iowa, beat the Hawkeyes at their own game with four interceptions.

After allowing an average of 30.2 points per game from 2018 to 2020, Purdue is down to 14 points per game this season, which ranks fifth nationally. The Boilers have twice as many interceptions (6) as passing touchdowns allowed (3), and rank fifth in red-zone efficiency. Lambert, who coordinated the nation's top scoring defense at Marshall in 2020, sees a "really similar" product from Purdue so far.

"They just get after it," he said. "They're cohesive. You have the ability to get pressure with four. That's a real similarity."

"When your best player is your hardest-working player, you've got something," Lambert said. "That's what he is."

Safeties Cam Allen (three interceptions) and Marvin Grant have embraced the scheme changes well, and opponents are completing only 52.3% of passes against Purdue. The Boilers' improvement should help this week against Wisconsin's struggling offense, although the Badgers have won 14 straight in the series.

"I don't know the last time Purdue beat Wisconsin," Lambert said. "They're going to try to come in and bully us. We've got to be ready and stay in the moment." -- Adam Rittenberg

No. 8 Oklahoma State at Iowa State (3:30 p.m. ET, FOX): This is one of the most interesting games of the weekend in that it features two of the country's most surprising teams with a surprising favorite.

Oklahoma State coach Mike Gundy has done an outstanding job of playing to this team's strength, with running back Jaylen Warren powering the Cowboys and one of the country's best defenses shutting down opponents and keeping them in games. Iowa State, meanwhile, got off to a disappointing start, going 2-2 -- including a 16-10 win over Northern Iowa and losses to Iowa and Baylor. But the Cowboys are 6.5-point underdogs at Caesars Sportsbook -- the second-biggest margin by a top-10 team against an unranked team in the past 40 years -- and ESPN's FPI gives them about a 22% chance to win. The Cowboys have won by slim margins each week, and are the third 6-0 team in AP poll history to average a margin of victory of seven points or less.

But Gundy sees that as a positive. "I think it helps our team because we've done it. Unfortunately, pretty much every game we've been in this situation," he told reporters this week. "So, if we get in that situation, you would like to think that we wouldn't panic, we could make plays down the stretch."

This game has a much greater meaning with Texas' loss to the Cowboys last week. The winner of this game has the best chance, statistically speaking, to meet Oklahoma in the Big 12 title game. According to FPI, OSU would have an 81% probability to make it to Arlington. Iowa State would have a 48% chance with a win. -- Dave Wilson

No. 10 Oregon at UCLA (3:30 p.m. ET, ABC):As a 5-1 Oregon team heads to the Rose Bowl this Saturday to face 5-2 UCLA for what could be the most high profile Pac-12 game left on the schedule, head coach Mario Cristobal seems to have landed on a bittersweet way to describe his team.

"It seems like when our backs are against the wall, that's when our best comes out," Cristobal said in his weekly press conference Monday.


To Cristobal's point, the Ducks are 3-1 in the four games this season that have been one-score contests during the fourth quarter. If winning close games can be considered a skill, then being in close games late -- especially against inferior teams like Cal-- can also be a warning sign.

Oregon's offense seems to rely on pressure to get going at times. Boos from the home crowd on Friday night against Cal prompted a game-winning drive from quarterback Anthony Brown. Brown himself has struggled to start well, but he still only has one interception all year. Though the team has lost running back CJ Verdell to injury this season, Cristobal and offensive coordinator Joe Moorhead want to see more consistency, more explosive plays. Currently, the Ducks are 83rd in the country in plays from scrimmage that go 20 yards or more.

"We're never going to reach the standard set for this offense," Moorhead said. "We're trending in the right direction, but there's a ton of room for improvement."

On the other side, Chip Kelly seems prepared, at least theoretically, for his former team's offense. He said Monday he'd watched every Oregon game from this season and last, including last year's close 38-35 loss in Eugene. His strategy, in coach-speak at least, seems to be straightforward: Keep your eyes open.

"They try to put your defense in conflict," Kelly said. "They probably run more RPOs than anyone in the country. They're trying to trick you and fool you and you gotta be disciplined with our eyes." -- Paolo Uggetti

USC at No. 13 Notre Dame (7:30 p.m. ET, NBC):Notre Dame entered this season with just one returning starter on its offensive line, and a new starting quarterback in Wisconsin transfer Jack Coan, resulting in some growing pains throughout the first half of the season.

Following another change at left tackle, and a bye week of self-evaluation, the Irish might be closer to figuring it all out -- just in time to host rival USC. True freshman Joe Alt will make his second straight start at left tackle on Saturday, the second true freshman to start on the offensive line for the Irish this fall and the fourth different starter Notre Dame has used at left tackle.

Alt started in the road win at Virginia Tech, and Notre Dame has also moved offensive tackle Michael Carmody to tight end, where he'll still wear No. 68 and be used primarily as a blocker. The Irish are trying to get Kyren Williams and the running game going, and they've also got to do a better job protecting Coan because he's not as mobile as the other quarterbacks.

Coach Brian Kelly said he hopes the offense can build on what appeared to be a promising second half in Blacksburg.

"I still think it's just, you know, maturation, and 11 players pulling together as one," he said this week. "We had that more or less in the second half against Virginia Tech. We're hoping that that was a turning point for us offensively, that we can get more of that on a consistent basis if we can ... running the football and being able to be balanced on the offensive side of the ball." -- Heather Dinich

Tulane at No. 21 SMU (7:30 p.m. ET, Thursday, ESPN): As 6-0 SMU continues to wipe the vestiges of 40 years of irrelevancy from its football history, the Mustangs have to keep cruising in games like this one against 1-5 Tulane to get where they want to go on a national level. SMU is just one of five remaining Group of 5 unbeatens, but Willie Fritz and the Green Wave haven't been an easy out for the Mustangs. SMU has won six straight in the series, but four of the past five have been decided by four points or less, including last year's overtime win.

There should be plenty of points scored this year. The Mustangs are averaging 40.7 points per game, good for 10th in the FBS, whereas Tulane allows an average 40.2 points per game, fourth-worst nationally. But that's somewhat skewed by the schedule the Green Wave have played, including road games at Oklahoma and Ole Miss, though they also gave up 52 to East Carolina on Oct. 2.

Just three quarterbacks in SMU history have thrown 30 touchdowns in a season, including Shane Buechele in 2019. But Tanner Mordecai already has an FBS-best 26 this season and has thrown four or more TDs in every game except last week, when he still was 30-of-40 for 324 yards with two touchdowns. -- Wilson 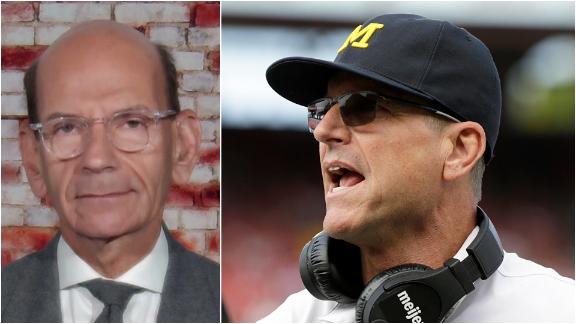