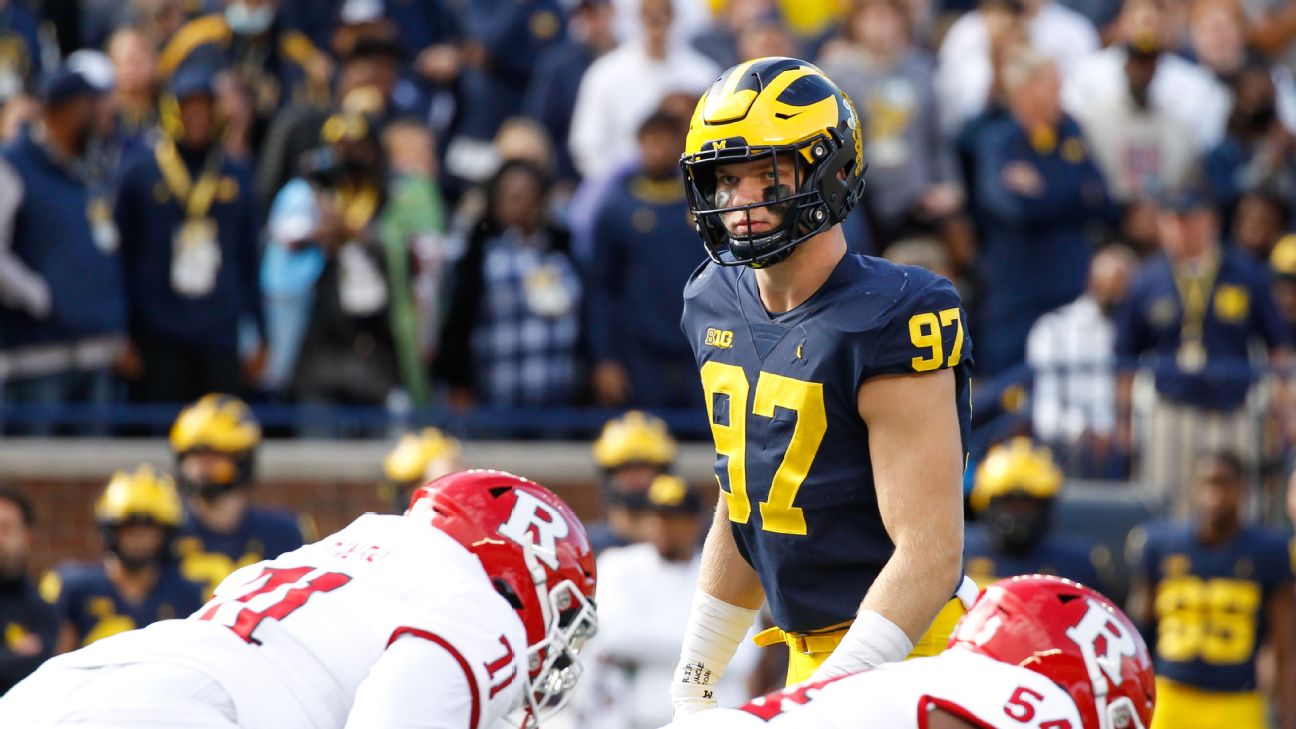 The teams currently in the mix for the College Football Playoff might be familiar, with Georgia, Alabama, Oklahomaand Ohio Statein position to once again earn one of the coveted four spots. But many of the players who are leading the way for those teams and others have stepped into starring roles for the first time.

Not one player on the 2021 ESPN Midseason All-America team was included on the All-America team at the end of the 2020 season. The Crimson Tide lead the way with three selections, followed by Georgia and Iowa, each with two. Overall, the 24 players selected on offense, defense and special teams come from 20 different teams.

The first-year starter is only the sixth player in the College Football Playoff era with at least 1,700 passing yards, 20 passing touchdowns and no more than three interceptions through six games. Four of the previous five went on to become NFL first-round draft picks: Cal's Jared Goff, Alabama's Tua Tagovailoa, LSU's Joe Burrow and Oklahoma's Kyler Murray. The other was Florida's Kyle Trask last season.

Walker, a Wake Forest transfer, leads the FBS with 152.2 rushing yards per game -- more than 20 yards better than the next player. He's also averaging 7.1 yards per carry -- best among FBS players with at least 100 attempts. Walker is one of just seven Power 5 running backs in the CFP era with 900 rushing yards, nine rushing touchdowns and more than 7 yards per carry through six games. Stanford's Bryce Love and LSU's Leonard Fournette were among the others.

It's amazing what Robinson can do when the Longhorns give him the ball. He ranks fourth in the FBS with 131.5 yards per game and has already run for more yards than all of last season, with twice as many rushing touchdowns. His 59 missed or broken tackles is 10 more than any other runner in the FBS.

Don't blame London for the Trojans' disappointing 3-3 start. He has 64 catches -- nearly three times as many as any other player on the USC roster -- for 832 yards with five touchdowns. He had 16 catches against Utah, 13 against Washington State and more than 100 yards receiving in all but one game. London's 64 receptions are the most by a Power 5 receiver through six games since West Virginia's Tavon Austin had 68 in 2012.

Downs is still working his magic in the Tar Heels' disappointing start. He leads the ACC with 49 receptions and 741 receiving yards. He is the first FBS player to have at least eight receptions and a touchdown in six straight games since Fresno State's Davante Adams, who did it in nine consecutive games in 2013. Downs has a touchdown catch in seven straight games going back to last season's Capital One Orange Bowl. He has 451 yards after the catch, most among Power 5 players, and 162 more than London, who is second.

Likely's stat line through six games this season (27 catches, 513 yards, eight touchdowns) looks a lot like Florida's Kyle Pitts a year ago (29 catches, 513 yards, 11 touchdowns). In the undefeated Chanticleers' 52-20 victory at Arkansas State on Oct. 7, Likely had eight catches for 232 yards and four touchdowns, including a school-record 99-yarder on Coastal Carolina's second play from scrimmage. He is the first tight end in Sun Belt Conference history with four touchdown receptions in a game.

The Crimson Tide uncharacteristically have some problems up front on offense, allowing 14 sacks in six games, but Neal isn't one of them. He earned a team-high 89.3 grade from PFF in Alabama's 42-21 victory against Ole Miss. Neal has shown versatility during his college career, starting 13 games at left guard in 2019 and 13 games at right tackle in 2020.He has allowed only one sack in 206 dropback snaps and has not been called for a penalty in 415 snaps overall.

In his first season as the starting right guard, Cox has helped solidify Kentucky's "Big Blue Wall," which has paved the way for the SEC's leading rusher, Chris Rodriguez Jr. Thanks to its punishing ground game, Kentucky is 6-0 for the first time since 1950 and just the second time in the past 111 years. Described as the strongest pound-for-pound player on the team, Cox had seven knockdown blocks, 15 blocks at the point of attack and didn't miss an assignment in last week's 42-21 victory against LSU. Overall, he has graded at 80.8 percent with 15 knockdown blocks this season. He also recovered a fumble in the end zone, which was the winning touchdown against Missouri.

The Hawkeyes' homegrown star from Solon, Iowa, has been absolutely dominant during their 6-0 start. According to Pro Football Focus, Linderbaum has a 92.8 run-blocking grade, which is 11 points better than any other center in the FBS. PFF also noted that he didn't allow a sack, hurry or quarterback hit in Iowa's 23-20 victory against No. 4 Penn State last week. He's a clear favorite to win the Rimington Trophy as the country's top center.

Johnson didn't start playing football until his senior year of high school and played his first two seasons in college at Davidson. The Maryland native graded out as Boston College's top lineman last season, after moving from left guard to left tackle. He's back at guard this season and has been just as good. The Eagles have surrendered just six sacks in five games, fewest in the ACC. They also rank fifth in rushing at 185.6 yards per game.

The Wolfpack's left tackle hasn't allowed a sack in 371 snaps through five games. Even more impressive, he has zero blown blocks on 152 run-play snaps and just three blown blocks all season. A two-time ACC offensive lineman of the week this season, Ekwonu had a career-high 11 pancake blocks against Louisiana Tech and eight more against Clemson.

Davis nearly turned pro after the 2020 season, but Bulldogs coach Kirby Smart urged him to return to school, get in shape and play with more effort and intensity. His decision to come back is paying off in a big way, as ESPN's Mel Kiper Jr. now projects him as a top-15 pick. At 6 feet, 6 inches and 340 pounds, Davis is a space eater in the interior. But Davis' extraordinary quickness for a man his size allows him to chase down quarterbacks in the backfield and running backs on the perimeter.

The Missouri transfer has been a big part of the Hogs' revival under second-year coach Sam Pittman. The fifth-year senior is tied for the FBS lead with 21 quarterback pressures and leads the Razorbacks with four sacks to go with 15 tackles and 4 tackles for loss. He was at his best in a 20-10 upset of No. 7 Texas A&M with two sacks and three quarterback hurries.

Dean is every bit as impactful as Davis on the best defense in the FBS. The Mississippi native has more than lived up to his lofty reputation as a recruit. He has 23 tackles, four tackles for loss, 3 sacks, 11 quarterback hurries and one interception through six games. Dean is PFF's highest-rated linebacker with an 89.3 grade.

After recording just one tackle for loss in his first six games at Alabama, Anderson has 20 in the past 13. This season, he leads the SEC and ranks second in the FBS with 11 tackles for loss in six games. He also is tied for the FBS lead with 21 quarterback pressures and leads all Power 5 defenders with 16 tackles at or behind the line of scrimmage.

Lloyd has been a one-man wrecking crew for the Utes this season. He leads the league with 10.6 tackles per game and nine tackles for loss in five games. He had 6 tackles for loss in the last three games alone. In the Utes' 42-26 win at USC last week, its first over the Trojans in Los Angeles since 1916, Lloyd had eight tackles, one tackle for loss and one pass breakup. The two-time All-Pac-12 selection also leads the league with 10 run stuffs and 13 tackles at or behind the line of scrimmage.

The first true sophomore captain in Arizona State history, Butler is spearheading a unit that leads the Pac-12 in scoring defense (16.2 points) and total defense (299 yards). Through six games, Butler leads the Sun Devils with six tackles for loss and is tied for the team lead with 39 tackles to go with two sacks and two interceptions. He has 12 tackles behind the line of scrimmage and nine stops on runs for negative yards or at the line of scrimmage.

Hankins has been one of the best players on an Iowa defense that leads the FBS with 16 interceptions. According to data from PFF, Hankins has allowed only 44 passing yards in coverage, and his 0.19 yards per coverage snap ranks first among FBS players. He has three interceptions in six games, which is tied for second in the Big Ten behind teammate Riley Moss' four.

Gardner, a junior from Detroit, had the secret sauce in Cincinnati's victories against Indiana and Notre Dame, which helped the Bearcats rise to No. 3 in the AP poll and put them in the CFP mix. In those two games, he held opposing quarterbacks to only 2-for-9 passing for 19 yards when targeted. Overall, Gardner has two interceptions with 10 tackles and two pass breakups in five games.

Kiper projects Hamilton as the second-best player available for the 2022 draft, and he has largely played up to that billing this season. He leads the Fighting Irish with three interceptions and is second with 33 tackles, to go along with 2 tackles for loss and four pass breakups. At 6-4 and 219 pounds, Hamilton is big enough and physical enough to make plays at the line of scrimmage, as evidenced by his big fourth-down stop in a 27-14 victory against Purdue.

The transfer from Lackawanna College is a team captain and leader of a Penn State defense that ranks second in the Big Ten in allowing just 13.8 points per game. Brown has 25 tackles, 3 tackles for loss, two interceptions, three pass breakups and one quarterback pressure in six games. In Penn State's 16-10 win at Wisconsin in the opener, Brisker intercepted a pass at the Nittany Lions' 2 and returned it 41 yards with 2:16 to play.

Sciba is just about automatic when it comes to kicking for the undefeated Demon Deacons. He is 12 for 12 on field goals this year and has made 24 straight going back to last season, the longest active streak in the FBS. It's 10 shy of the NCAA record of 34 he set in 2018-19. Sciba has made 69-of-76 field goal attempts in his career, a 90.8 success rate. That's the highest in NCAA history among players with at least 50 attempts. He has never missed in 152 point-after tries. He made a 29-yard field goal with 22 seconds left in a 37-34 victory against Louisville on Oct. 2, his 22nd birthday.

Araiza has been a field-position weapon for the unbeaten Aztecs through five games. He leads the FBS with a 54.1-yard average, which is 3.08 yards ahead of the FBS record set by Texas A&M's Braden Mann in 2018. The San Diego native has put 14 of his 33 punts inside opponents' 20-yard line, and 20 of his punts were longer than 50 yards, including three of more than 70 yards. 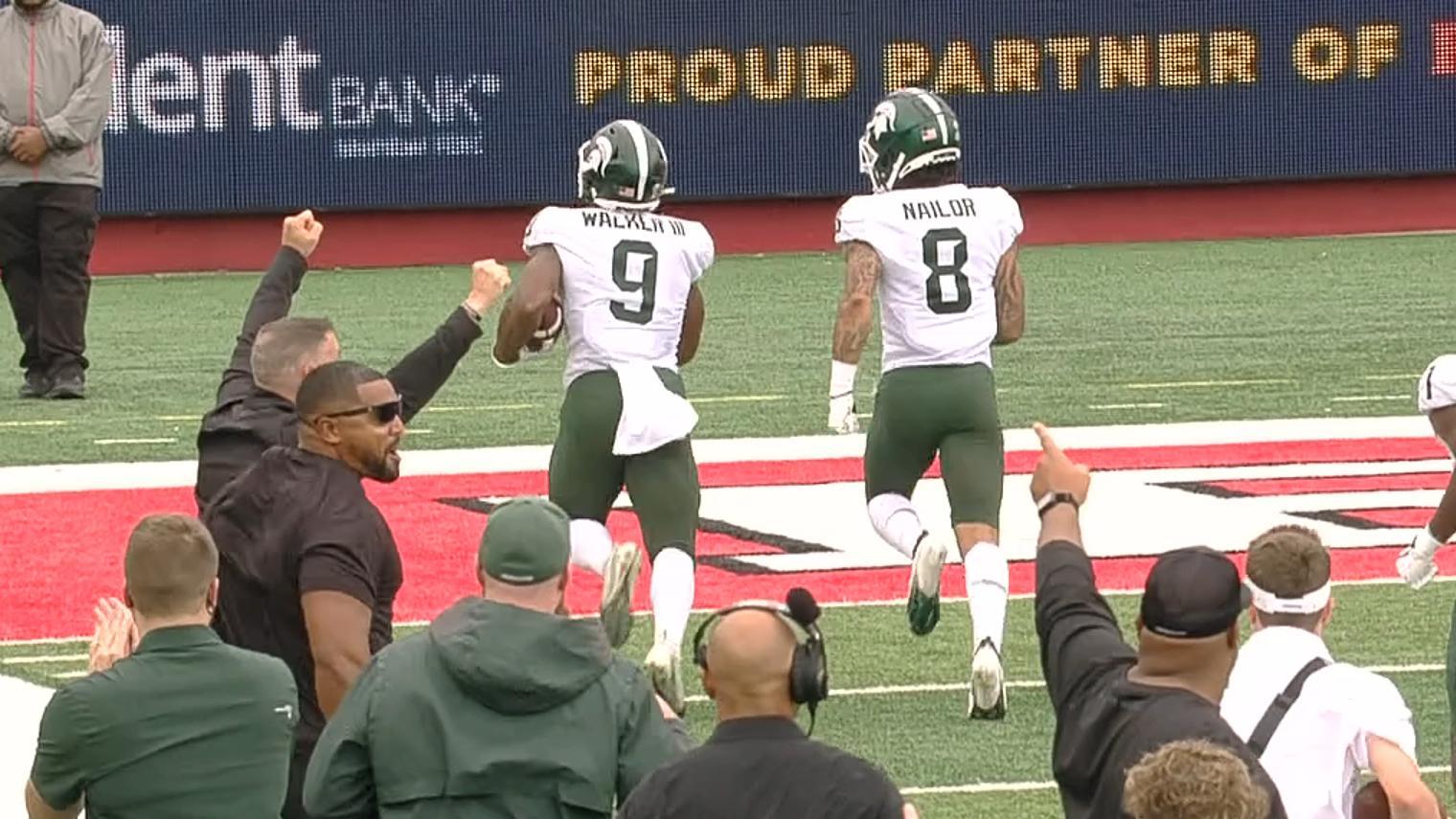