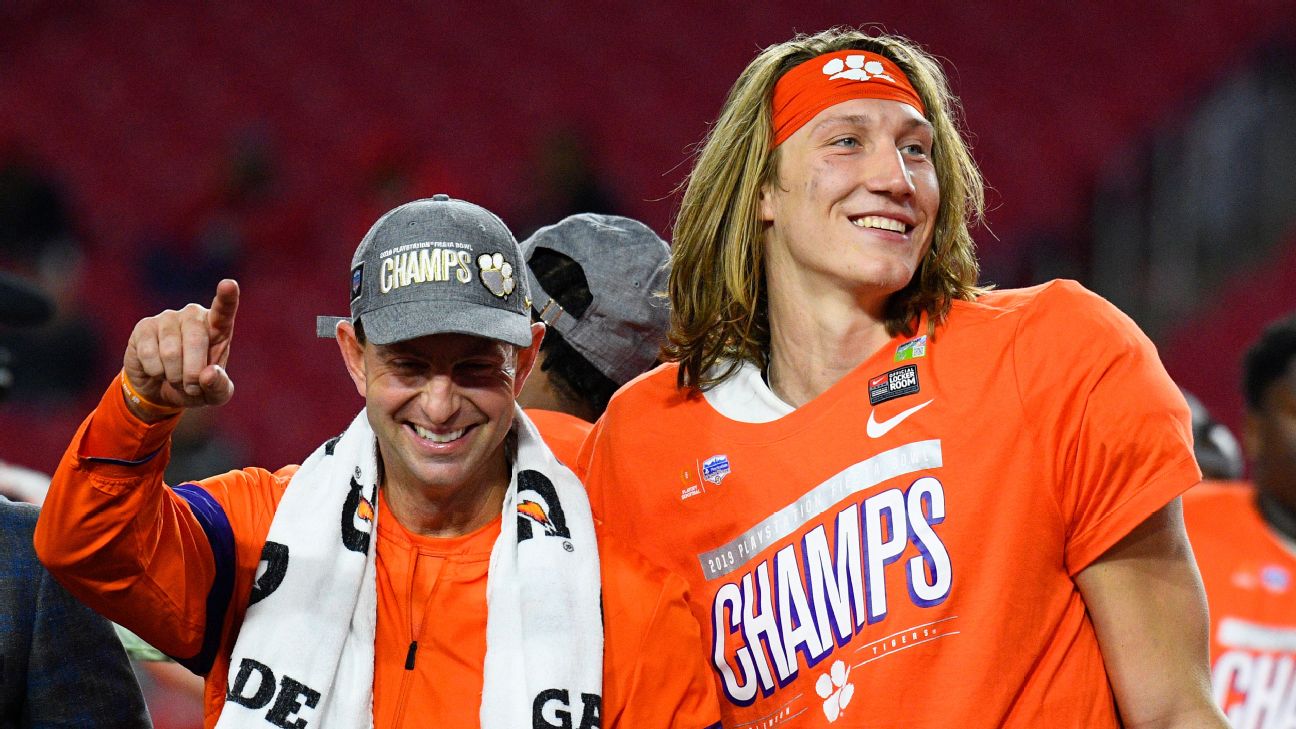 With years of reimagining offenses in college football under his belt, Mike Leach has coached a lot of big-time quarterbacks. He's produced college superstars such as Graham Harrell and Kliff Kingsbury. He's developed under-the-radar transfers into record-setters, like Gardner Minshew and Anthony Gordon. In all, he's had 12 seasons of a QB throwing for at least 4,000 yards.

Something Leach has never had though? A QB with the natural talent of K.J. Costello, the No 2 overall QB recruit from 2016 and a guy many peg as a future NFL draft pick.

Leach's Air Raid offense transformed the college football world, often turning less talented passers into unstoppable forces at far-flung locales like Valdosta State, Texas Tech and Washington State. The blueprint was simple: Find diamonds in the rough, hand them the keys to a wide-open offense, then watch the scoreboards light up.

The situation in 2020, however, is a bit different. Leach will coach his first season in the SEC since 1998, when he was the offensive coordinator at Kentucky, and he'll turn his offense loose on the league with Costello at the helm, a QB who already has a 3,500-yard season under his belt despite the far more stodgy confines of Stanford's pro-style attack.

So what's going to happen when this new formula is unleashed?

"It's hard to tell because we haven't even had a chance to practice yet," Leach said. "The big thing is everybody getting to know the personnel, building the rapport with the receivers and just working on muscle memory when they run a route."

There's not much in the way of muscle memory at Mississippi Stateright now. Leach took over for Joe Moorhead in January, bringing his Air Raid offense to a place not known for fireworks. Spring practice was nixed in the wake of the coronavirus pandemic. Costello hasn't thrown a competitive pass since Nov. 9 of last year, and he hasn't started a game since suffering a thumb injury last September. Now both coach and QB are at a new school in a new league with big expectations for Year 1.

Leach's last SEC stop ended in 1998, with Tim Couch becoming the first QB in league history to throw for 4,000 yards (and the only one until Johnny Manziel did it in 2013). Couch went on to become the first pick in the NFL draft. Costello has more natural talent than Couch, and until last year's injury-plagued season, he had the pedigree to be an early draft pick, too.

And Leach points out that, while the pair haven't been working together, there is a bit of familiarity. Leach recruited a handful of players out of Santa Margarita High School, where Costello played, and they'd met a handful of times throughout recruiting. Costello then started twice against Leach's Washington State teams while at Stanford (both losses for the Cardinal). Most importantly, Leach said, coach and QB just mesh.

"I think he transitions well," Leach said. "He's kind of a statuesque guy, but he throws the ball really well, he's smart, and I think he was excited about the change himself."

How this first season goes for Leach and the Bulldogs' offense is still a question, but it seems a near certainty it will at least be interesting.

As for other top coach-QB combos, the list is extensive.

The funny thing is, Swinney and Lawrence don't have all that much in common. Swinney embraces the role of plucky overachiever, whereas Lawrence has been a superstar since he was 14. Swinney has a Clark Griswold dad vibe, while Lawrence, with his long blond hair, stands out in any crowd. Swinney is an outspoken salesman, and Lawrence embraces a quiet, private demeanor.

But what the pair shares is far more significant than their differences. First is the success. Lawrence helped Clemson to its second national championship in three years in 2018, and Swinney has taken the program to unimaginable heights. But it's really more about mindset, Swinney said.

"Trust, respect, belief in each other and transparency," Swinney said of the keys to his rapport with Lawrence. "We both love to prepare and we both love to compete."


Ohio State won the Big Ten and nearly knocked off Clemson in the College Football Playoff in Day's first year as a head coach and Fields' first season as a starting QB. That's a pretty strong debut, and the relationship between coach and QB was at the heart of the Buckeyes' success.

After a rocky freshman campaign at Georgia, Fields went in search of a new home, and he said that he instantly hit it off with Day, and by season's end, Fields said that he was closer to his head coach than any man except his father.

That's the foundation for a 2020 season where Fields is an early favorite to win the Heisman Trophy, and Day's Buckeyes are as well-positioned as any team in the country to win it all.

After Vince Young and Colt McCoy made Texas a QB haven in the previous decade, the Longhorns' offense disappeared from 2010 through 2017 as the team cycled through both coaches and quarterbacks. But the marriage between Herman and Ehlinger has revived the fireworks in Austin, and their offensive success over the past two years -- 80 total TDs, 8,100 yards -- is on par with anything Young or McCoy produced in their heyday.

Somewhere along the line last season, Row the Boat transitioned into Throw the Ball, and it worked out beautifully for the Gophers. Fleck's offense jelled behind Morgan, who upended the traditional run-heavy attack in the Big Ten to produce the league's first-ever pair of 1,000-yard receivers. Fleck, Morgan and one of those receivers, Rashod Bateman, are back for 2020, and the offensive fireworks figure to be just as explosive.

For years, there was no better QB whisperer in the country than Fisher, who turned JaMarcus Russell, Christian Ponder, EJ Manuel and Jameis Winston into first-round draft picks. Struggles in his final years at Florida State shook the reputation a bit, but Fisher seems to have found his next great protege in Mond, who has accounted for 59 touchdowns and nearly 7,000 yards in the past two seasons.

When the oldest coach in the Power 5, who'd ended his tenure at Texas amid a host of QB criticisms, takes a new job after five years away from coaching and starts a true freshman in Week 1 -- well, those stories don't usually have happy endings. Turns out though, the veteran coach and the freshman QB matched up perfectly. Brown instantly turned around a listless North Carolina program in 2019, while Howell quickly adapted to the college game and finished his season with 3,641 passing yards and 38 touchdowns.


Riley might be the most masterful offensive mind in all of college football. He's coached at Oklahoma for five years, two as offensive coordinator and three as head coach, and he's had a Heisman finalist four seasons, including two winners. So, what are the odds his next QB, the top-ranked QB recruit in the 2019 class, won't work out? Pretty slim. Rattler has the talent and Riley has the scheme, and if the Sooners' offense isn't one of the best in the country again in 2020, it'll be a complete shock to everyone.

Trivia question: Who led the country in yards per pass last season? How many guesses would it take before you landed on Cunningham, who posted an astonishing 11.54 yards per attempt in 2019 to go with 28 touchdowns. The craziest part of Cunningham's unlikely success is that he wasn't even Louisville's starter Week 1. It was only after Jawon Pass went down with an injury that Cunningham was elevated to the starting job, but he was a perfect fit for Satterfield's progressive offensive style, turning one of the worst teams in the country in 2018 into a scoring machine in 2019.

The castoffs who found the perfect home

Dykes was fired at Cal after the 2016 season, just about the time Ehlinger arrived at Texas and signaled the end to Buechele's time as the Longhorns' heir apparent at QB. Dykes landed at SMU in 2018, where he installed his explosive offensive game plan. Buechele transferred to SMU a year later, and the pair instantly clicked. Buechele accounted for 36 TDs and more than 4,000 yards, while SMU enjoyed its first 10-win season since 1984.

Add a coach who's been infamously fired at multiple previous stops together with a lightly recruited QB who has four career TD passes to his name, and what do you get? Possibly the SEC's most explosive duo. It's hard to consider Kiffin a sure thing in his return to the SEC, but he's always been able to generate big offensive numbers, even if his coaching tenure is a mixed bag overall. Meanwhile, Plumlee was a work in progress as a passer after taking over the Ole Miss offense midway through last season, but his ability to run -- 1,023 yards and 12 touchdowns -- makes him a real weapon. Perhaps Kiffin and Plumlee prove to be the perfect match, and both blossom into something special.

The list of high-profile recruits to land in Malzahn's lap over the years is a pretty long one: Mitch Mustain, Jeremy Johnson, Sean White, Woody Barrett, Jarrett Stidham and Joey Gatewood were all ESPN300 prospects. None developed into a star under Malzahn, whose best season came with converted cornerback Nick Marshall. So, what happens with five-star phenom Nix? His freshman campaign resulted in some big plays and big wins over Oregon, Texas A&M and Alabama last season, but the overall numbers -- 57% completions, 6.7 yards per pass, 16 TDs -- were far from spectacular. If Malzahn can develop Nix into a star, Auburn has title hopes. If not, the résumé of failed recruits starts to look awfully discouraging for Auburn fans.

The best of the rest

Matt Campbell and Brock Purdy are rewriting the Iowa Staterecord book together. Billy Napier and Levi Lewis have Louisiana poised to be one of the most explosive offenses in the country. Dan Mullen and Kyle Trask seem to have found the right mix forFlorida.Clay Helton took a risk on Kedon Slovis, now the QB might save Helton's job at USC.Brian Kelly and Ian Book might not provide tons of fireworks, but their rapport has worked for Notre Dame.Josh Heupel and Dillon Gabriel are just scratching the surface of UCF'spotential, and Nick Saban should be just fine with any QB on his roster at Alabama. Just don't expect another Tua Tagovailoa in 2020. 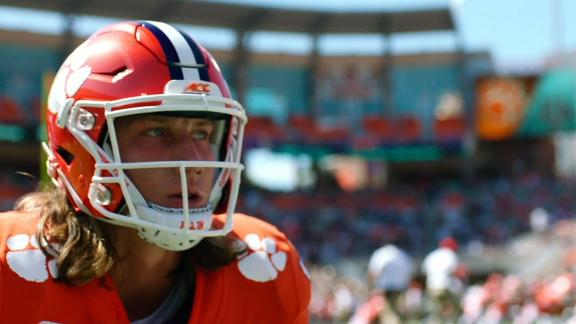