Commish: No plans to add 2 schools 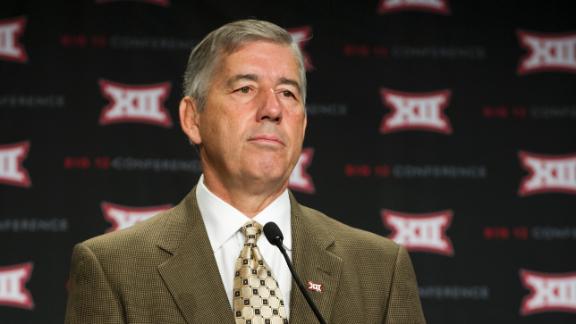 Bowlsby said West Virginia athletic director Oliver Luck, a voting member of the playoff selection committee, briefed the room, one day after the conference was shut out of the first College Football Playoff.

After visiting with Luck, Bowlsby said he believes the Big 12 not having a title game "had a bearing" on co-champions Baylor and TCU missing out. The other four power conferences have title games.

Bowlsby believes the "human nature" of Ohio State's dominance of Wisconsin in the Big Ten championship game left a "lasting impression" that was a factor.

He said Big 12 athletic directors will decide if one Power 5 nonconference opponent is required in the future, but added that each program in different stage of development.

Baylor had one of the weakest nonconference schedules in the country, and that was a factor in its failure to qualify.

Bowlsby said his recent remark that he would have voted for TCU for the playoff was more about believing the Horned Frogs were better positioned to stay ahead of Ohio State in the rankings and not a slight at Baylor.