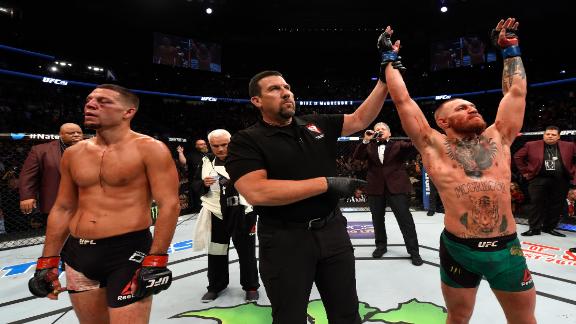 LAS VEGAS -- Last month, UFC sold for $4 billion in the largest transaction for a single franchise in sports history.

On Saturday, Conor McGregor and Nate Diaz offered evidence that the sport might be worth every penny.

In the first event officially under new WME-IMG ownership, McGregor (20-3) avenged his loss to Diaz (19-11) earlier this year by winning a majority decision in UFC 202 at T-Mobile Arena. The five-round welterweight fight is an instant front-runner for fight of the year.

Judges Derek Cleary and Jeff Mullen scored the rematch 48-47 for McGregor, and judge Glenn Trowbridge had it as a draw at 47-47. ESPN.com also had the fight as a 47-47 draw.

McGregor, who suffered the first loss of his UFC career to Diaz (19-11) via second-round submission in March, delivered a calm, measured, 25-minute performance. He dropped Diaz three times in the first two rounds but showed patience in not rushing in for the quick finish. That was a mistake McGregor made in the first fight.

Diaz survived the early knockdowns and came roaring back in the third round, in which he outlanded McGregor 49-26 in significant strikes, according to FightMetric. Diaz won the round by a 10-8 score on one judge's scorecard.

Once Diaz picked up the pace, the bout never slowed down. According to immediate stats by FightMetric, Diaz landed 271 total strikes, compared to 190 by McGregor. Diaz attempted 446 strikes, while McGregor attempted 313.

Diaz, who outlanded McGregor 166-164 in significant strikes, expressed doubts about the scorecards after the fight and immediately demanded a trilogy.

"I came to this fight worse off than last time. I didn't get to train. I had injuries. I'm not making excuses, but you should have finished me off," Diaz said, directing his remarks at McGregor. "I'm ready for [No. 3]. I gave you [No. 2]."

McGregor threw several leg kicks throughout the fight and was noticeably limping afterward, but he denied reports that he had injured his foot and told reporters only that his shin is "banged up." Still the defending 145-pound featherweight champion, McGregor agreed to a third fight but said it would not take place at 170 pounds.

Diaz, who fights out of Stockton, California, has fought the majority of his career at the 155-pound lightweight limit.

UFC president Dana White told SportsCenter after the fight that another matchup could be complicated by McGregor's featherweight title.

"Conor has to defend his title or make a decision to give it up or whatever he wants to do," White said. "I don't know. I've got to sit down and see what's next. If I was Conor, I'd defend my title."

McGregor's game plan Saturday night was evident early. He caught Diaz repeatedly with leg kicks while looking to set up the left hand. Chants of "USA" were quickly replaced by "Ole" after Diaz was knocked down in the opening round. He went down twice more in the second round. McGregor motioned him to stand back up each time.

Diaz started to go on the offensive after that, pressing into his smaller opponent with volume striking. He slapped McGregor several times in the third and paused to point and laugh at him each time. McGregor showed signs of fatigue in the round and jogged away from Diaz at times, which made Diaz taunt him even more.

The fourth round proved to be crucial. McGregor landed a hard kick to the body that finally served to back Diaz off. Diaz's entire face was swollen and bloodied from the first two rounds, and he started to show fatigue. He pushed McGregor into a clinch and tried to use his size advantage, but McGregor broke off and landed shots.

Diaz scored his only takedown of the bout moments before the final bell in the fifth. He helped McGregor up at the conclusion of the bout, and the two hugged.

White told SportsCenter that the fight exceeded his expectations.

"I didn't see that fight going five rounds, and it did," he said. "One minute, it looked like Conor was gassed, and he got a second wind. Diaz got dropped a couple of times, it looked like he was done, and he came back. It was an absolute epic fight."

McGregor defeats Diaz by decision in rematch
In a rematch of their UFC 196 fight, Conor McGregor and Nate Diaz go the distance, and McGregor comes out on top via majority decision at UFC 202. 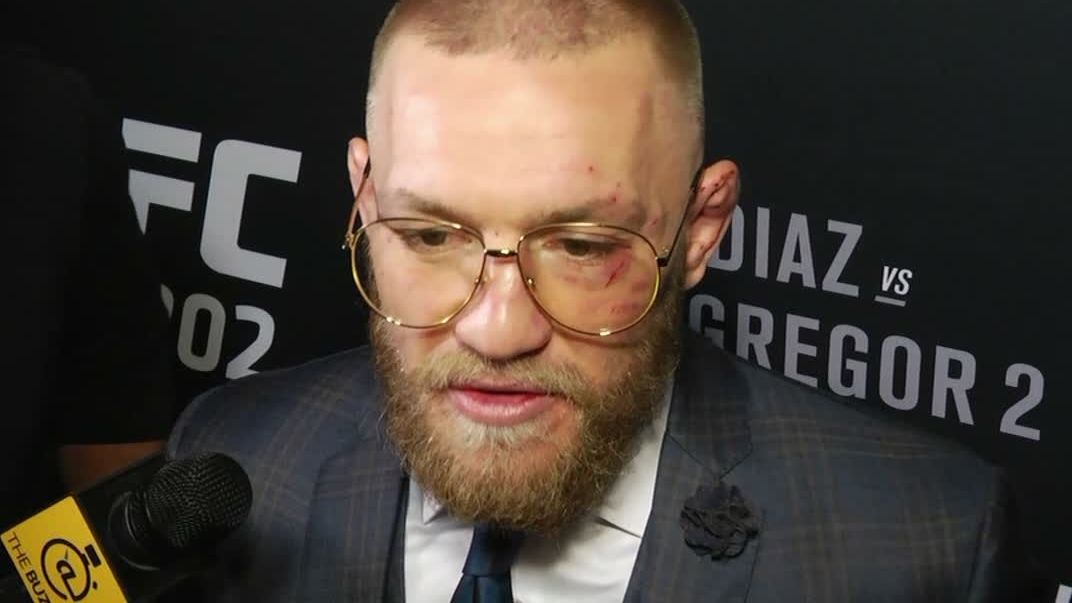