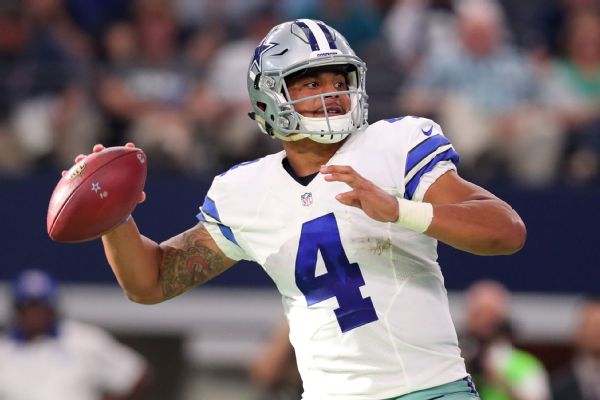 FRISCO, Texas --Dallas Cowboys coach Jason Garrett did not make any promises about the rest of the season, but he made it clear thatDak Prescott is the team's starting quarterback.

"You can make it as simple or as complex as you want to make it," Garrett said. "It's pretty simple for us: Dak's going to play quarterback as we go forward."

After Sunday's 10-7 loss to the New York Giants, Garrett said at no point did he contemplate pulling Prescott in favor of Tony Romo, who has been the No. 2 quarterback the past four games.

Prescott struggled against the Giants, completing 17 of 37 passes for 165 yards with one touchdown and two interceptions. He was also sacked three times. Prescott has gone three straight games without passing for at least 200 yards.

Romo, the franchise's all-time leader in passing yards and touchdowns, suffered a compression fracture in his back on Aug. 25 and was on injured reserve for the first nine games. During that span, Prescott went 8-1 as the starter and had 13 touchdown passes to two interceptions. He completed better than 65 percent of his passes in nine of the first 11 games.

Over the past two games, however, Prescott has found the going rougher. The Cowboys beat the Minnesota Vikings 17-15, but Prescott threw for just 139 yards on 12-of-18 passing. He did not have an interception but he was sacked three times.

In the past two games, the Cowboys have converted just two of 24 third-down opportunities, and both came on runs -- a scramble by Prescott against the Vikings and a run by Ezekiel Elliott.

"We're just focused on Dak playing quarterback for us," Garrett said when asked what he would need to see -- or not see -- in order to make a move to Romo. "And we'll continue to do that in our preparation this week and as we go forward.

"He's done a really good job for us up to this point, won 11 of 13 games that he's started, and he's handled really every situation as well as you can handle it. So we'll just continue that way. Tony will be in a backup role for us and he'll be ready to go if he's called upon to play.

"But Dak's done an outstanding job up to this point. [I'm] excited to see him continue to play."