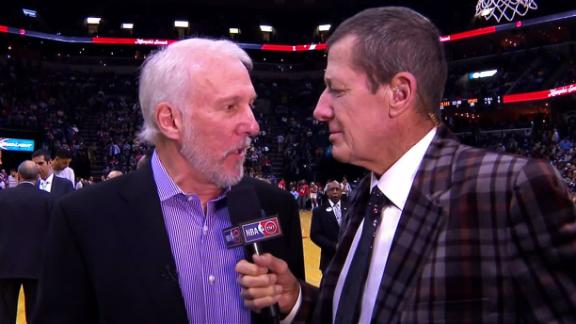 Turner Sports reporter Craig Sager will get a chance to work his first NBA Finals, thanks to a unique partnership with ESPN.

Sager, a 34-year Turner veteran and popular TNT sideline reporter known for wearing flashy suits, has continued to work as he faces a recurrence of the leukemia he has been battling for the past few years.

He has never worked an NBA Finals series but will share sideline reporting duties with Doris Burke for Thursday's Game 6 in Cleveland between the Cavaliers and Golden State Warriors (ABC, 9 p.m. ET).

"I'd like to thank Turner and ESPN for approaching me with this tremendous opportunity to be part of The Finals broadcast team," Sager said in a statement. "I've been watching the series very closely and, while I do not want to distract in any way from the event itself, I look forward to being in the building for what will be an incredibly exciting Game 6. The NBA community is a very special one and this is a great honor."

In a video message to Sager released by ESPN, Burke said: "Welcome to our team. It's our honor."

On July 13, ESPN will present Sager with the Jimmy V Perseverance Award at The 2016 ESPYS.

"Craig is an iconic member of the NBA family who indelibly makes his mark on each and every broadcast," John Wildhack, ESPN executive vice president, production and programming, said in the statement. "I know our entire team is delighted to work with Craig for Game 6. We all agree his professional reputation is second-to-none, though it's his personal reputation -- that of class, selflessness and respect -- which makes this even more special for our team. We hope that this will be a special night for Craig and for NBA fans. We are grateful for his interest and for the continued collaboration with our friends at Turner."

Sager missed 11 months while undergoing treatment for leukemia and a bone marrow transplant from his son before returning to his position on the sideline during TNT's NBA coverage in March 2015. But he revealed in an interview with HBO in April that his cancer was no longer in remission.

Shelly Smith: Sager 'strongest individual I know' in fight against cancer
Shelly Smith shares what it means to her to have Craig Sager working Game 6 of the NBA Finals for ESPN.