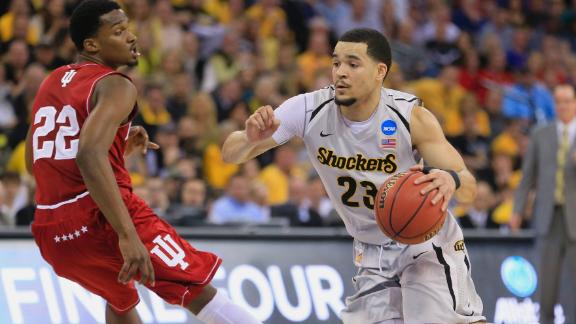 OMAHA, Neb. -- Indiana coach Tom Crean said Friday after the Hoosiers were eliminated from the NCAA tournament that he planned for his team to "absolutely be obsessed with getting better" in the areas that plagued it this season.

Seventh-seeded Wichita State beat No. 10 Indiana 81-76 in the round of 64 in the Midwest region.

Speculation surfaced about Crean's job status as Indiana struggled late this season. Crean did not address the situation during Indiana's news conference after Friday's season-ending loss.

The Hoosiers lost their final three games of the regular season, and 10 of 15 overall down the stretch, after a 5-1 start to Big Ten play. Indiana finished 20-14, falling in its NCAA opener after Crean took the Hoosiers to the Sweet 16 in his other tournament appearances with the school in 2012 and '13.

He talked Friday like a coach who expected to return.

"We've got to build consistency in all areas and improve and stay the course," Crean said, "because I think they got a lot better through the year. The record didn't always reflect it, but I'm with them every day. So I'm going to be the judge of it. I have insight into this team ... and I like where it's headed."

Indiana started two freshmen and two sophomores Friday in addition to junior guard and leading scorer Yogi Ferrell. The Hoosiers led 39-36 at halftime but surrendered runs of 8-0 and 15-3 to Wichita State in the second half.

"I couldn't be prouder of this team for how we played," sophomore forward Collin Hartman said.

Information from ESPN's Darren Rovell contributed to this report.