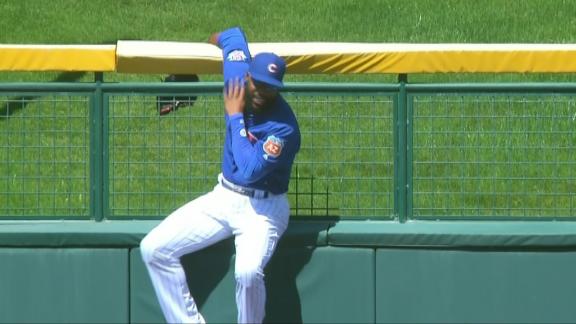 Chicago Cubs center fielder Jason Heyward was surrounded by a swarm of bees and stung multiple times during the top of the third inning at Sloan Park in Mesa, Arizona, halting the game with the Seattle Mariners for more than five minutes.

Heyward kept waving his glove, tried walking to different parts of the outfield, and even climbed the center-field fence trying to elude the pests. He said after the game that he was stung at least 10 times on his face and neck, but fortunately is not allergic.

"It started on my face then the back of my head over here," Heyward said. "It's OK. I'm not allergic."

TV cameras caught the swarm, which eventually made its way into the stands, causing fans to scramble for cover. Heyward, his hands swatting continually, jogged to several spots in the outfield and even climbed up on the fence to avoid them.

"They came over from right field so I tried to get out of the way," Heyward said. "I should have gone over the fence."

At the end of the inning, Cubs' relievers abandoned their bullpen in left field when bees swarmed a chair in their pen. They walked across the field and joined the Mariners' relievers in the right field bullpen.

"It was wild,'' Cubs starter Jason Hammel said. "I've never seen anything like that before.''

After moving past the bees in the field, Heyward belted a two-run home run in the bottom of the third inning. It wasn't enough to propel his team to a win, however, asRobinson Canobelted three home runs with seven RBIs en route to a 12-9 Mariners victory.

Earlier this spring, a swarm of bees briefly delayed the Royals-Rockies game.