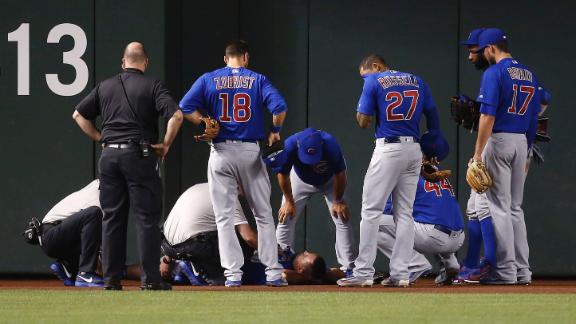 Chicago Cubs left fielder Kyle Schwarber has full tears to the ACL and LCL in his left knee and will be out for the rest of the season, the team said Friday.

An MRI revealed the extent of the knee injury for Schwarber, one of several heralded young stars for the Cubs, who entered the season among the World Series favorites.

Schwarber also suffered a severely sprained ankle in a scary collision with center fielder Dexter Fowler in the Cubs' 14-6 win over the Arizona Diamondbackson Thursday.

"A young man in his sophomore season in the big leagues," Cubs manager Joe Maddon said Friday, "one of the most refreshing and talented in all of Major League Baseball. Now to be out for the rest of the season, it's not easy."

An optimistic Schwarber took to Twitter on Saturday to address his injury.

Schwarber is expected to have surgery in one to three weeks and will remain at the Cubs' spring training facility in Mesa, Arizona, until he is ready to travel back to Chicago, according to Cubs president Theo Epstein. The team hopes that Schwarber can return for spring training next year, but with damage to two ligaments, they aren't sure of the timetable.

"Chicago will be the headquarters for the rehab," Epstein said. "The most important things to Kyle at this point are winning and staying connected to the team.

"Everyone who knows Kyle was sick watching that play and the aftermath of that play. Just devastated for him. It's tough news. It's really devastating news, but we have to follow his example. In the wake of this injury, he's putting the team first."

A catcher by trade, Schwarber, the fourth overall pick in the 2014 draft, made his major league debut last year. He hit .246 with 16 home runs and 43 RBIs in 69 games then slugged a franchise-record five home runs in nine postseason games.

Asked whether Schwarber's injury would keep him from playing catcher again, Epstein said: "It all depends how the surgery goes and how well the rehab goes. If everything goes the way we want it to go with the surgery and the rehab and he comes out the other side with full range of motion, there's a chance it won't impact him at all going forward."

Schwarber, 23, was expected to produce plenty of power for a Cubs team that was 3-0 this season before a3-2 loss Friday night to the Diamondbacks.

"He's going to be missed," Cubs catcher David Ross said. "I mean there's no sugarcoating. We love the guy. It's a sad day here in our locker room.

"Freak things happen. You've got to move on. The game doesn't wait around. He doesn't want us to dwell."

Added Cubs first baseman Anthony Rizzo: "He carried us, carried us for a good period, carried us in the playoffs. He came [into the season] ready to go, and for this to happen sucks."

Maddon said the Cubs have the depth and versatility to have several options in left field.

"The need for depth always comes up in one form or another, but this is not the way we wanted it to come up," Epstein said. "Twenty-four hours ago, I thought we were well positioned to win in large part because of Kyle's presence on the team, and now we're really well positioned to win for Kyle. I think that's how his teammates are responding and will respond going forward."

Added Bryant: "It's the third game of the season, and for that to happen is terrible luck. I'm sure he's not too happy about it, and we're not happy either. We'd love for him to be here the whole year, but we've got to figure out a way now and come together. We have the right guys, the right group, that can kind of pull [together] around him."

Fowler made contact with Schwarber's legs as the two chased a line drive off the bat ofJean Segura in left-center during the second inning Thursday.

Schwarber said Thursday night that the ankle and knee felt "tight" and "sore," but he was hopeful that the MRI wouldn't show further damage.

After colliding with Fowler, Schwarber rolled around on the warning track before athletic trainers attended to him. Schwarber remained down for several minutes before getting to his feet with the assistance of the trainers and limping to a cart, which took him off the field.

"That kid hit the ball, and it's in the wrong spot, at the wrong height, the wrong trajectory, the wrong everything for us," Maddon said. "If it went over the wall, we'd all be better off."

Maddon talked to Schwarber before the Cubs played Friday night.

"I want him to understand one thing: It's all about him right now," Maddon said. "We're just concerned about him. We'll figure out a way to survive this whole moment."

Information from ESPN staff writer Jesse Rogers and The Associated Press was used in this report. 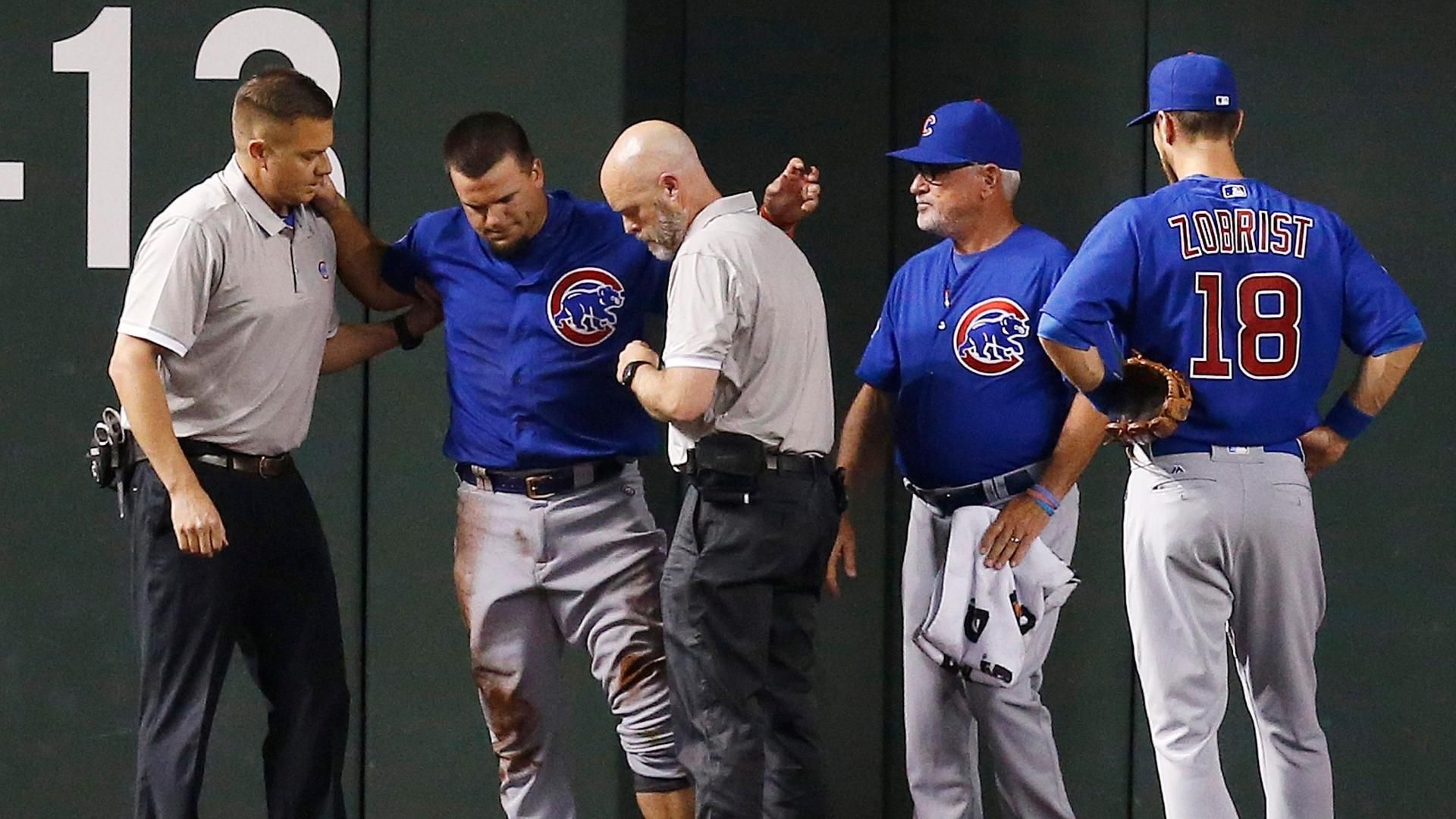 Schwarber done for season, 'terrible news for Cubs'
ESPN MLB Insider Buster Olney breaks down why the loss of Kyle Schwarber for the season with a full tear to his left ACL and LCL is a huge blow for the Cubs. 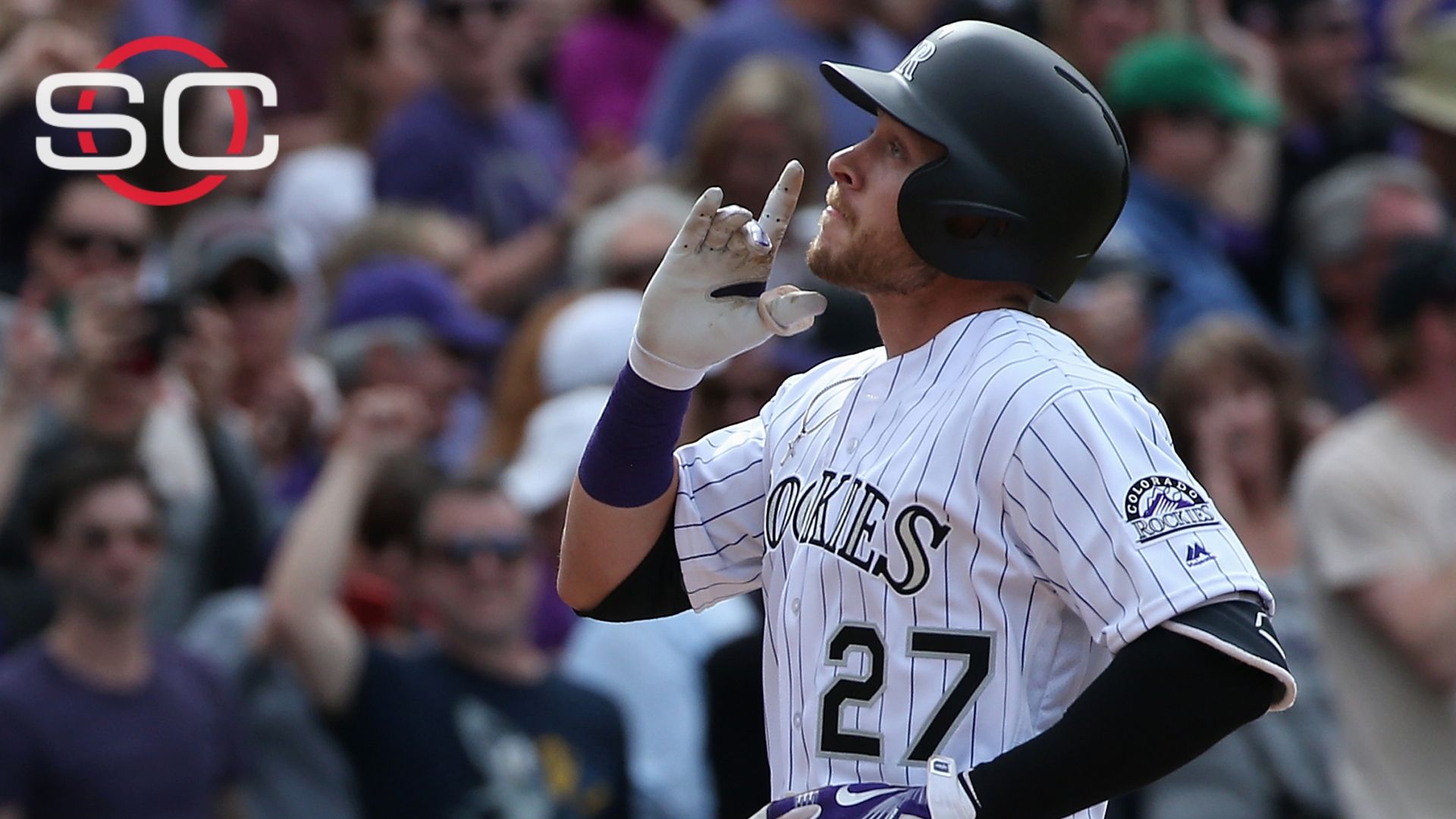