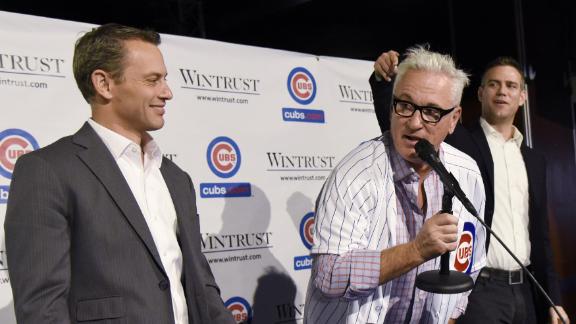 PHOENIX -- Both the Chicago Cubs and the agent for new manager Joe Maddon have been contacted by Major League Baseball as an investigation into his hiring has commenced, according to sources familiar with the situation.

The New York Post reported earlier on Monday that MLB was looking into whether the Cubs contacted Maddon before he opted out of his contract with the Tampa Bay Rays late last month. Days later, he signed a five-year deal to manage the Cubs.

"We welcome the MLB investigation," Cubs president Theo Epstein told reporters Monday at the general manager meetings in Arizona. "There was no tampering whatsoever. I'd rather they investigate so we can clear our name and move on from this quickly. We're giving our full cooperation and we welcome it."

Neither agent Alan Nero nor Cubs general manager Jed Hoyer had much new to say about the situation. Both have repeatedly denied the accusation.

Nero has been adamant there was no tampering involved.

"Theo would not even have talked unless he got clearance from the commissioner's office," Nero said recently. "It's silly to suggest [tampering]. If they want to pursue that, that's fine."

Hoyer added a "no comment" on Monday and stands by what Epstein reiterated Monday and first said last week in denying the notion at Maddon's introductory news conference.

Maddon had an opt-out clause in his contract that kicked in if his boss, Andrew Friedman, left the Rays. Friedman took a job with the Los Angeles Dodgers in October, giving Maddon 14 days to decide whether to opt-out of his deal. Nero says he asked for permission to "look around" for what was available for Maddon during the opt-out window but that the Rays denied permission.

After negotiating with Tampa Bay for several days, Nero said, Maddon's camp determined that an agreement on a new deal wasn't forthcoming and that's when he exercised his opt-out clause. Nero says he then informed other clubs, including the Cubs, that Maddon was available.

"Joe would have stayed if [Tampa Bay] had stepped up," Nero said.

Maddon signed a $25 million deal with the Cubs, giving him a significant raise. The Cubs fired Rick Renteria to bring Maddon aboard.