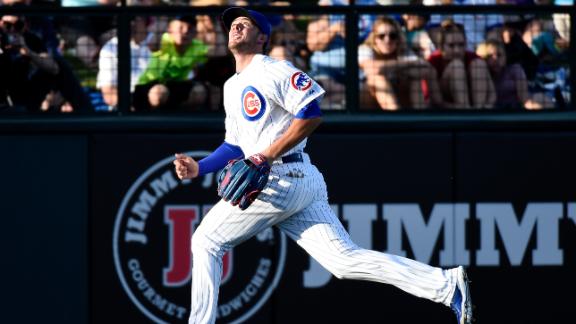 CHICAGO -- The Cubs will promote top prospect Kris Bryant on Friday, paving the way for his major league debut, a move he called the realization of a dream.


Bryant will take third basemanMike Olt's roster spot, and the Cubs tweeted that he will start and bat cleanup against theSan Diego Padreson Friday. Olt will go on the disabled list with a hairline fracture in his wrist suffered last weekend in Colorado when he was hit by a pitch.


Bryant weighed in on the news via Twitter late Thursday night.

The Cubs have not officially announced Bryant's addition to the 40-man roster.


Bryant, 23, is hitting .321 at Triple-A Iowa after hitting his third home run Thursday night against New Orleans. Bryant hit a fifth-inning pitch to the wall in right that looked like it was going out, but the right fielder leaped to make a great catch. An inning later, he went deep in left with a ball that barely stayed fair. He had a morning flight scheduled after getting a postgame phone call informing him of the promotion, according to the New Orleans Times-Picayune.


Bryant was the topic of conversation all spring as he led the Cactus and Grapefruit leagues with nine home runs.Last season he was named the minor league player of the year, hitting .325 with 43 home runs and 110 RBIs split between Double-A and Triple-A.

Bryant was the No. 2 draft pick out of San Diego in 2013 after leading all collegiate players in home runs with 31.


Months later, Bryant won the MVP of the Arizona Fall League, also leading all hitters in home runs. Then came his breakout season in the minors in 2014.


Bryant became the face of a controversial rule in the collective bargaining agreement that states a player is credited with a full year of service time if he's in the majors for 172 days out of the 183-day season. By keeping a player in the minors for the first 11 days of the season, a team can retain his rights for an extra year before he becomes a free agent.


By recalling Bryant now, the Cubs have control over him until after the 2021 season instead of 2020. It prompted his agent, Scott Boras, to be critical of the Cubs earlier in the process, while the front office said he was going back to the minors for purely baseball-related reasons.

After the Cubs demoted Bryant in late March, the MLB players' association stated it was a "bad day for baseball," while the league responded by essentially telling the union to butt out of the Cubs' business. Bryant was disappointed with the demotion after having such a good spring.


"I was told it was a top-two spring training performance, which was cool to hear," Bryant said at the time of his meeting with Cubs management. "The dream is on hold for a little bit, but I'm hungrier than ever."


Bryant will be the latest of a core of young players to make his debut for the Cubs. He will join fellow rookie Jorge Soler on the major league team as two players expected to be part of the Cubs' middle of the order for a long time.


Information from ESPN.com's Mike Triplett was used in this report.

BBTN Minute: Kris Bryant called up by Cubs
The Baseball Tonight crew discusses the Cubs' decision to bring Kris Bryant to the majors.