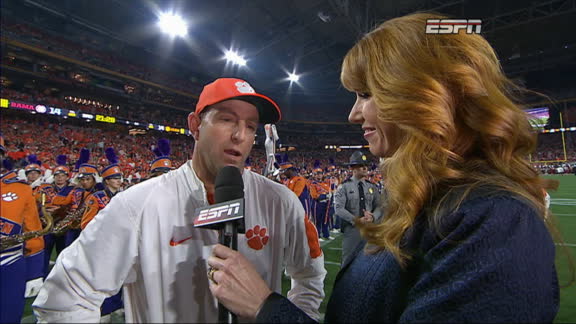 GLENDALE, Ariz. --Clemsoncoach Dabo Swinney wasn't pulling any punches in his disappointment with the officials' performance at the end of the first half in the Tigers' 45-40 loss -- and he let them know it at halftime.

Swinney berated the officials as they walked down the hall to the locker rooms with the score against theAlabama Crimson Tidein the College Football Playoff final deadlocked at 14-14.

"You made me use a timeout," Swinney screamed multiple times, complaining throughout his walk to the locker room about a last-play sequence that resulted in a blocked Clemson field goal.

The clock was never stopped after Clemson's first down near the end of the half, and that cost the Tigers the opportunity to run another play.

"Really, really frustrated with how the clock was handled right there," Swinney said in a halftime interview with ESPN before heading to the locker room. "That's very disappointing. Cost me a timeout."

Clemson's locker room was down the hallway from the officials'.

"They're playing their tails off right now -- both teams. This is the way it oughtta be," Swinney said in the interview with ESPN's Heather Cox.

Swinney cited Deshaun Watson'sinterception as the "one mistake" for the Tigers.

"Kind of made the wrong throw right there, and they capitalized on that," Swinney said. "But hey, it's a tie ballgame, you know. We'll get in here and see if we can play a little better the second half and find a way to win it."

Swinney: Both teams playing their tails off
Clemson coach Dabo Swinney voices his frustration with the way the clock was handled at the end of the first half, but says it's a tie game and he's ready for his team to find a way to win the title.