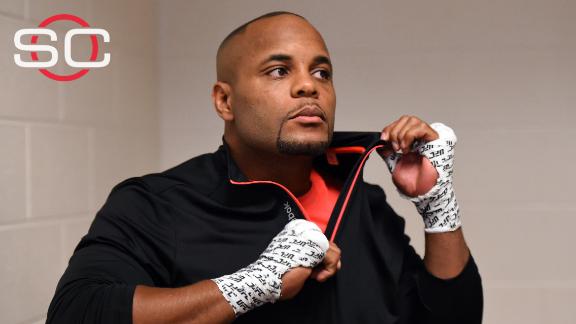 A highly anticipated light heavyweight title rematch between Daniel Cormier and Jon Jones at UFC 197 later this month is off as Cormier has been forced to pull out because of a leg injury, but Jones says he still wants to fight in the event.

Sources confirmed the development to ESPN.com on Friday, following an initial report by BJPenn.com. UFC officials have not yet commented on Cormier's withdrawal or indicated whether Jones will remain on the April 23 card in Las Vegas.

Sources told ESPN.com that Jones would continue to train in the meantime and on Saturday, the former champion posted a social media video that let it be known he definitely wants to remain on the event. Jones (21-1) famously declined a short notice fight in 2012, which resulted in the cancellation of UFC 151. Jones referenced that decision in his post on Saturday, but said circumstances are different this time.

"Hey, you all know I'm not into taking last-minute fights, it's not the way me and my trainers do things," said Jones in a post on Instagram. "But this last year's been real crazy and I feel like I owe my fans so much.

An obvious candidate to replace Cormier in the bout would be former title contender Anthony Johnson (21-5). Johnson was supposed to fight Jones for the 205-pound title in May 2015, but Jones was pulled from the card after he was arrested on a felony hit-and-run charge in Albuquerque, New Mexico. Johnson went on to fight Cormier for the vacant title and lost via submission.

On Saturday, one of Jones' representatives at EAG Sports Management, Denise White, announced on social media Jones had agreed to fight Johnson at UFC 197, but quickly deleted the post. White apologized and said she'd "jumped the gun."

Cormier (17-1) was scheduled to make his second title defense. He lost to Jones in a prior meeting at UFC 182 in January 2015, but won the title in his very next fight after Jones was stripped of the 205-pound belt because of disciplinary reasons.

Currently, a flyweight championship bout between Demetrious Johnson (23-2-1) and Henry Cejudo (10-0) is slated as the UFC 197 co-main event. The pay-per-view card will take place at MGM Grand Garden Arena.