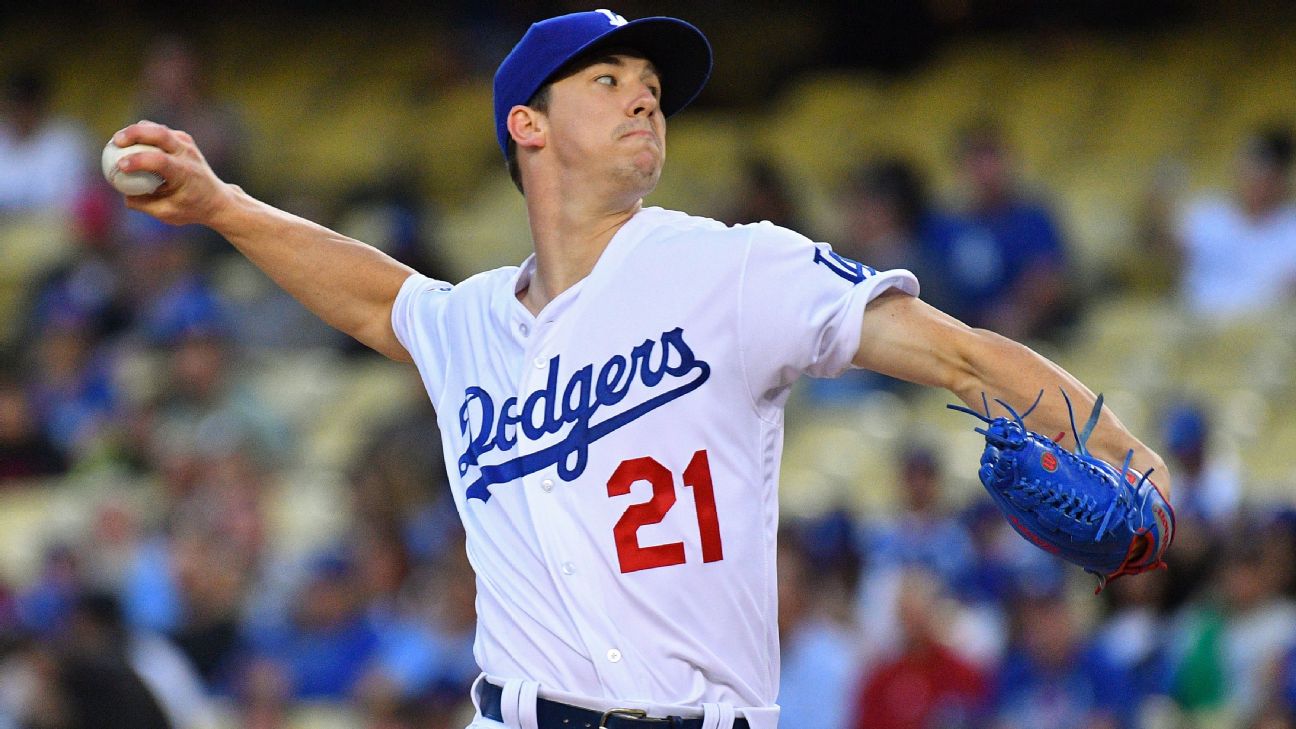 LOS ANGELES -- Walker Buehler has bruised ribs, but scans and X-rays showed no further damage after the Los Angeles Dodgers rookie right-hander was lifted from a start with pain in his side.

Buehler said Saturday he is uncertain how much time he'll miss or if he'll need to go on the disabled list. He was hit by Trevor Story's line drive in a game against Colorado on May 21 and made three starts after that, but the rib injury caused him to exit a game Friday night against Atlanta in the sixth inning.

"I don't think it's anything long term that's going to affect me," Buehler said. "It's just a matter of getting it right."

Buehler began Friday with four perfect innings and was still cruising in the sixth when manager Dave Roberts became concerned about a drop in Buehler's velocity. Roberts and a trainer ran to the mound and spoke with Buehler before removing him. Roberts said Buehler was having some difficulty breathing.

The team plans to have Dr. Neal ElAttrache review CT scans and X-rays of Buehler's ribs.

"A timetable, right now, is really wide open because we don't want to jeopardize anything with his mechanics or anything to be compromised," Roberts said. "We want to make sure he's in a good spot physically and mentally before he makes another start."

The Dodgers have been plagued by injuries, especially to the starting rotation. Clayton Kershaw, Rich Hill, Kenta Maeda, Hyun-Jin Ryu and Dennis Santana are all on the disabled list. Santana was transferred to the 60-day disabled list Saturday with a right rotator cuff strain.

It's possible Buehler could land on the DL, too.

"It kind of comes and goes," Buehler said of the discomfort. "It's a tough spot to have it. You can't do anything in your life without twisting, turning and moving."

Buehler is 4-1 with a 2.63 ERA and has been a bright spot for a team that was desperate for starting pitching because of injuries.

"I got called up and kind of carved myself a place here, I feel like, and you just want to keep that momentum going," Buehler said. "It's frustrating to have any sort of hiccup. I could make my next start and I could not. You don't really know. It's frustrating from that aspect that I think I give this team a decent chance to win and I want to keep going."
Report a correction or typo
Related topics:
sportsespnmlbwalker buehlerdllos angeles dodgersdisabled listribsbruise
Copyright © 2022 ESPN Internet Ventures. All rights reserved.
TOP STORIES
Villanueva's former top aide admits belonging to alleged deputy gang
Gov. Newsom pardons woman who killed her pimp as a teen
SF couple gets $1,500 fine for parking in their driveway
After cyclist death, Griffith Park temporarily closes road to cars
UPS driver, 24, collapses, dies in SoCal heat
Uvalde school police chief resigns from city council
4th of July fireworks in Southern California: Where to watch
Show More
New Glassell Park restaurant at center of gentrification debate
14 suspects grab and run out with merchandise from Century City mall
California bid to create legal drug injection sites advances
Maryland woman wins lottery for 3rd time, cites game-winning strategy
Flight delays ease up Saturday during chaotic travel weekend
More TOP STORIES News