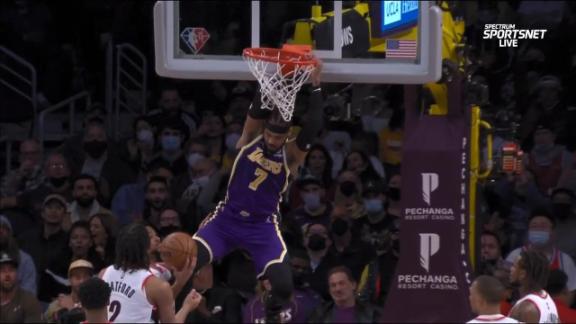 The All-Star forward scored 19 of his 30 points in the final 12 minutes and helped the Lakers rally for a 99-94 victory over the Portland Trail Blazers Wednesday night. Davis also had 15 rebounds, including seven in the fourth.


It is the third time this season that he has had at least 30 points and 15 rebounds in a game.

"I just tried to come out with the mindset of ending the streak," said Davis, who is averaging 29.3 points over his last three games. "We have to play with some urgency. We just fought hard tonight. It was a great game for us."

Los Angeles trailed 75-72 going into the fourth quarter but went on an 8-1 run to regain the lead. It would go up five midway through the quarter but a 3-pointer from Norman Powell tied it at 89 with 2:44 remaining.

The Lakers though would seize control with six straight points by Davis as they held a 95-89 advantage with 52 seconds left.

"He had some great sequences of grabbing rebounds in traffic," coach Frank Vogel said. "Tonight was about mental toughness and making enough plays and shots. It was a hell of a game by Anthony."

Carmelo Anthony added 24 for the Lakers, who were missing LeBron James for the fourth consecutive game due to left knee soreness. Anthony was the Lakers' offensive catalyst during the first half when he had 18 points, including four 3-pointers.

Powell led the Trail Blazers with 30 points and tied a season high with five 3-pointers. Anfernee Simons added 19 points while Jusuf Nurkic had a double-double with 16 points and 13 rebounds.

Portland has dropped three straight and five of its last six.

"We had a couple breakdowns. We had some good stops but gave them second and third-chance opportunities," said Powell, who has scored at least 30 points twice this season.


A three-point play from Dwight Howard gave the Lakers a 34-21 advantage less than three minutes into the second quarter before the Blazers rallied back with a 17-5 run over a four-minute span. Powell had 12 points in the quarter, including a running layup that tied it at 48 with 2:16 remaining.

The Blazers trailed 54-53 at halftime and didn't take their first lead until CJ McCollum's 3-pointer early in the third quarter. Portland extended its lead to 71-65 with 3:44 remaining on a layup by Simmons before the Lakers got within 75-72 at the end of the quarter.

"We did a good job of fighting back and staying with it, but there were some big moments where we couldn't get over the hump," coach Chauncey Billups said.

The win keeps the Lakers (25-27) in ninth place in the Western Conference, but it does give them a four-game cushion on the Trail Blazers, who have the final play-in spot.

The Lakers play the Clippers (26-27) on Thursday. A win would vault them into the eighth spot. The Lakers are 3 1/2 games in back of Denver for sixth in the Western Conference, which would get them out of the play-in tournament.

Anthony said the Lakers are starting to look at the standings, but that is not their main focus right now.

"Wherever we are at, that's where we are going to be. I think our main goal at the end of the season is to be healthy," he said. "Do I want to be in the play-in game? No. I would rather be a little more comfortable."


Trail Blazers: Portland was 0 of 8 on 3-pointers in the first quarter before going 8 of 13 in the second. ... Robert Covington had 13 rebounds and went over the 3,000 career mark.

Lakers: Howard had 10 points and seven rebounds. It is the first time in his last seven games he has scored in double figures. ... Avery Bradley had 11 points and tied a season-high with four steals.

Lakers: Face the Clippers Thursday as the visiting team.