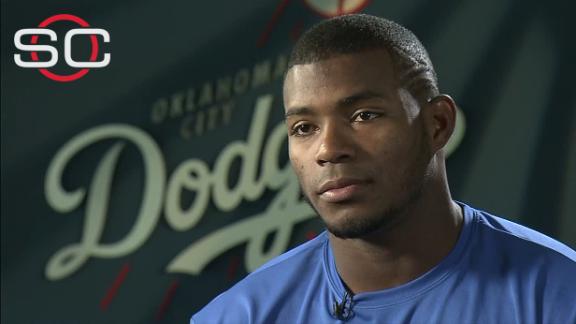 Dodgers' outfielder Yasiel Puig would have preferred a trade to another team instead of being demoted to the minors, but admitted to have learned some humility since joining the organization's Triple A team in Oklahoma City.

Puig, who was placed on revocable waivers by the organization on Sunday, spoke with ESPN's Marly Rivera in Oklahoma City about lessons learned and his future in the majors -- whether that is back in Los Angeles or somewhere else.

"I would have preferred to have been traded to another team and not go to Triple A, but here I am working," Puig said. "The guys here have received me well and I am thankful for that, and I hope to leave here soon wherever that may be."

Any team that picks him off waivers could then negotiate a trade with the Dodgers. He has performed well and currently has a .375 average, helping to raise his previously diminished trade value.

A reflective Puig said that adapting to the rules of a major league clubhouse since his breakout season in 2013 contributed to his struggles both on and off the field.

"They wanted to change so many things about me that I felt 'switched off,' " Puig said. "I don't feel like the player I was in 2013, but I know I have to change the things that I was doing."

He said he has learned humility during his three-week stint in the minor leagues, despite stirring up controversy after social media posts emerged of him partying with his new teammates after a loss.

"I have learned more humility, for that I am grateful," Puig said. "I am going to keep working so my teammates can see my situation and be able to give advice to other players about what has happened to me."

Puig apologized to both current Dodgers manager Dave Roberts and former skipper Don Mattingly for his previous behavior, which included showing up late to meetings and batting practices.