Determined Shohei Ohtani charging back into 2-way role for Angels 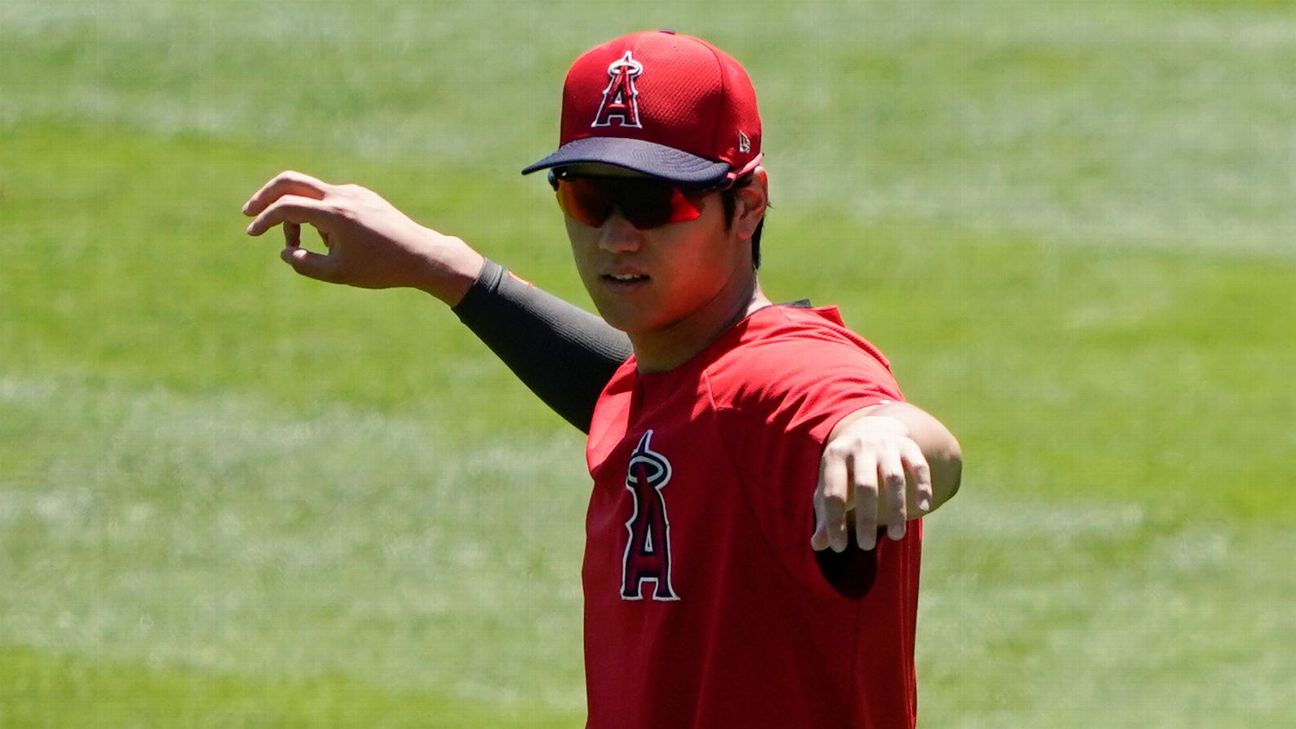 ANAHEIM, Calif. -- Shohei Ohtani is doing twice as much work as his Los Angeles Angels teammates again, and he's thrilled about it.

The majors' first serious two-way player in decades is alternating between batting practice and bullpen sessions this week at the Big A. Ohtani is determined to contribute on the mound and at the plate when the Angels return to action later this month for the short major league season.


Ohtani will pitch roughly once a week, and he'll serve as the Halos' designated hitter for a few games in between. If all goes as planned, he'll get at least eight mound starts and at least 30 games as DH.

He has been waiting to get back in full form since late 2018, when his American League Rookie of the Year campaign ended with Tommy John surgery. After roughly 17 months of patient arm rehab and a four-month pause at the start of the coronavirus pandemic, Ohtani said he is fully healthy and eager to do it all again.

The necessary training regimen keeps him uncommonly busy, but Ohtani embraces it with the ascetic mentality that got him to elite levels in Japan and North America.

"It's been normal for me to be doing both pitching and hitting my whole professional career, so last year was the weird season for me," Ohtani said Saturday through his interpreter. "Actually, it feels like I'm going back to my normal routine this year. In that sense, I feel very comfortable. And it's a short season. It's more of a sprint than a marathon, so I'm just trying to go 100 percent out of the gate."

Ohtani largely stuck around Anaheim for the past few months, and he was allowed to keep up his workouts at Angel Stadium because he was recovering from injury. He apparently formed a comfortable bubble around his life and stayed focused on the future.


"Other than going to the field and back, I had a lot of down time," Ohtani said. "Obviously, I have to eat and cook and stay healthy. On my down time, I was reading books and watching TV, but I would say I spent most of the time sleeping."

Ohtani, who turns 26 on Sunday, had already done remarkable things before his elbow gave out two years ago. He also needed left knee surgery after last season, which he spent entirely as a DH, but he is fully recovered from both procedures.

His coaches and teammates are seeing some of the stunning all-around athletic talent they remember from 2018, although Ohtani cautioned everyone to wait until he's actually throwing to live hitters.

"He looks great [on the mound], and he looks really good in the batter's box, too," new Angels manager Joe Maddon said. "The guys that have been around him more than I have are really impressed with where he's at right now, what he looks like, physical shape. I just keep hearing from the coaches that have seen him in the past how good he looks right now."

Maddon first got to know Ohtani at spring training in Arizona, and they spoke a few times at Angel Stadium during the pandemic pause. Ohtani already was formidably athletic, and a long offseason of work only appears to have improved his physique and technique.


"He's a quiet kid," Maddon said. "He's very internal. He's analytical. He smiles easily. He's just a good soul. He's just so dedicated to his craft. He doesn't want to be good. He wants to be great. That's the takeaway I get from him. He's motivated."

Ohtani is likely to pitch in an intrasquad game in the upcoming week as he gets into peak form for the start of the season in less than three weeks.

"I'll ramp up my intensity from there and see how my arm reacts," Ohtani said. "But as of now, I feel really good."

Angels notes: New starting pitcher Julio Teheran is not yet in camp, and Maddon didn't disclose the reason. The Angels signed the Colombian right-hander to a one-year deal in the offseason, and he is expected to be in their rotation. ... The team is scheduled for its first intrasquad game Tuesday in Anaheim.
Report a correction or typo
Related topics:
sportsespnnewslos angeles angelsshohei ohtani
Copyright © 2021 ESPN Internet Ventures. All rights reserved.
More Videos
From CNN Newsource affiliates
TOP STORIES