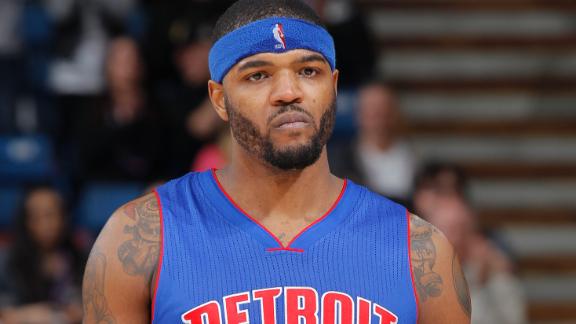 The Detroit Pistons on Monday waived veteran forward Josh Smith, who still had two years and at least $26 million remaining on his contract after this season.

"Our team has not performed the way we had expected throughout the first third of the season and adjustments need to be made in terms of our focus and direction," coach and team president Stan Van Gundy said in a statement.

"We are shifting priorities to aggressively develop our younger players while also expanding the roles of other players in the current rotation to improve performance and build for our future. As we expand certain roles, others will be reduced. In fairness to Josh, being a highly versatile 10-year veteran in this league, we feel it's best to give him his freedom to move forward. We have full respect for Josh as a player and a person."

Sources told ESPN.com's Marc Stein that Van Gundy personally delivered the news to Smith on Monday shortly before noon and stressed that there was no incident or blowup that precipitated the move. Van Gundy is expected to address the local media in Detroit later Monday.

Smith signed a four-year, $54 million deal with the Pistons before last season, but he shot only 42 percent from the field in 2013-14. This season, Smith is at 39 percent.

If Smith clears waivers over the next 48 hours, he will have the right to go elsewhere as a free agent. By choosing to waive Smith now, Detroit will have to pay off what is owed to Smith beyond this season, but the Pistons can reduce the yearly hit to the $5 million range over the next few years with the NBA's stretch provision.

NBA front-office sources told Stein that the Sacramento Kings, Dallas Mavericks, Houston Rockets, Miami Heat and Los Angeles Clippers are among the teams that will have interest in Smith when he clears waivers Wednesday.

As ESPN.com reported in both June and July, Sacramento tried to trade for Smith, offering various packages that included the likes of Jason Thompson, Derrick Williams and Carl Landry. The Pistons ultimately resisted all such overtures.

The Pistons, sources said, ultimately passed on multiple opportunities to trade Smith to Sacramento because Van Gundy wanted to give their partnership a chance first before dealing him away too hastily. But Detroit's new management duo of Van Gundy and general manager Jeff Bower quickly concluded that a change was needed and promptly put Smith back on the market, only to discover through shopping him aggressively in recent weeks that no team besides the Kings had any interest.

In the end, Detroit opted to abruptly release Smith and absorb the rare financial hit of releasing a player with more than $30 million in guaranteed money left on his contract -- including the money Smith is still owed this season -- as opposed to trying to force a trade that would have cost them additional assets such as future draft picks.

Smith was on pace to be the first NBA player to shoot below 40 percent on field goals and below 50 percent on free throws while taking at least 12 shots per game, according to ESPN Stats & Information.

Smith was drafted with the 17th overall selection in the 2004 NBA draft by the Atlanta Hawks.

Pistons Waive Josh Smith With 2 Years Left On Deal
Chris Broussard reacts to the news that the Pistons have waived forward Josh Smith, who still had two years and at least $26 million remaining on his contract after this season. Broussard discusses which teams may be interested in Smith.