Dez Bryant: Deal 'not going to change the way I play' 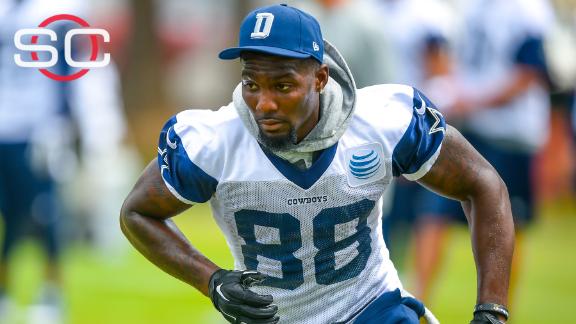 OXNARD, Calif. -- A little more than two weeks ago, Dallas Cowboys wide receiver Dez Bryant signed a $70 million contract that will change his life but not much else.

"It's no pressure, man," Bryant said after the Cowboys finished their first day of training camp practice. "It's no pressure. That deal don't make me. It don't make me. I play this game because I love this game. I don't give a damn about none of that. It's not going to change the way I play. It's not going to change the way I act. I'm here. Like, thank you, I can go buy me a home and now I'm able to take care of my family. Yeah, I love that, but as far as me performing on the field, like, I take full pride in that."

The contract made Bryant among the NFL's highest-paid wide receivers and included $45 million in guaranteed money.

As he waited for the deal, Bryant was not a full participant in the offseason program, showing up only a few times. He took part in one individual session in the organized team activities and was at the final day of the June minicamp.

Even though it would've "killed" him, Bryant said he would have been willing to miss regular-season games had the sides not come to an agreement before the July 15 deadline.

"Oh man, it was extremely hard, but at the same time, I was forced to be in a situation that I knew one day that would eventually come," Bryant said. "I never experienced it. I'm glad that we got it done and I'm here."

Because Bryant was not around the team in the spring, the Cowboys will monitor his work early in camp. They don't want to overwork him early. Bryant said he felt good during and after Thursday's workout but admitted he needed to acclimate himself to working through a practice at a high tempo.

"I'm going to listen to the coaches," Bryant said. "Whatever they tell me to do and when it's time for me to go full throttle, I'll be ready whenever they think."

Bryant has been named to the Pro Bowl the past two years and is the only receiver in Cowboys' history with three straight seasons with at least 85 catches, 1,200 yards and 12 touchdowns. Last year he led the NFL with 16 touchdown receptions.

While Bryant is mentioned with the likes of other top receivers such as Calvin JohnsonandLarry Fitzgerald, he said the statistics do not drive him.

"It's all about the work I put in," Bryant said. "I don't have a set goal. I really don't. You always want to be better the next year but ... it's not based off of the numbers. It's the way you physically feel and mentally. Like the maturity."

"You've seen Dez as an older, more mature Dez," Romo said. "He's come a long way since he first stepped on the field here, and I think it's exciting to see his growth as a player, as a person. He's like a little brother to me."

Bryant will be 31 when his contract expires, so there might be more negotiations in the future, but he said he sees himself as a Cowboy for life.

"I see myself always [as] a Cowboy at heart," Bryant said.