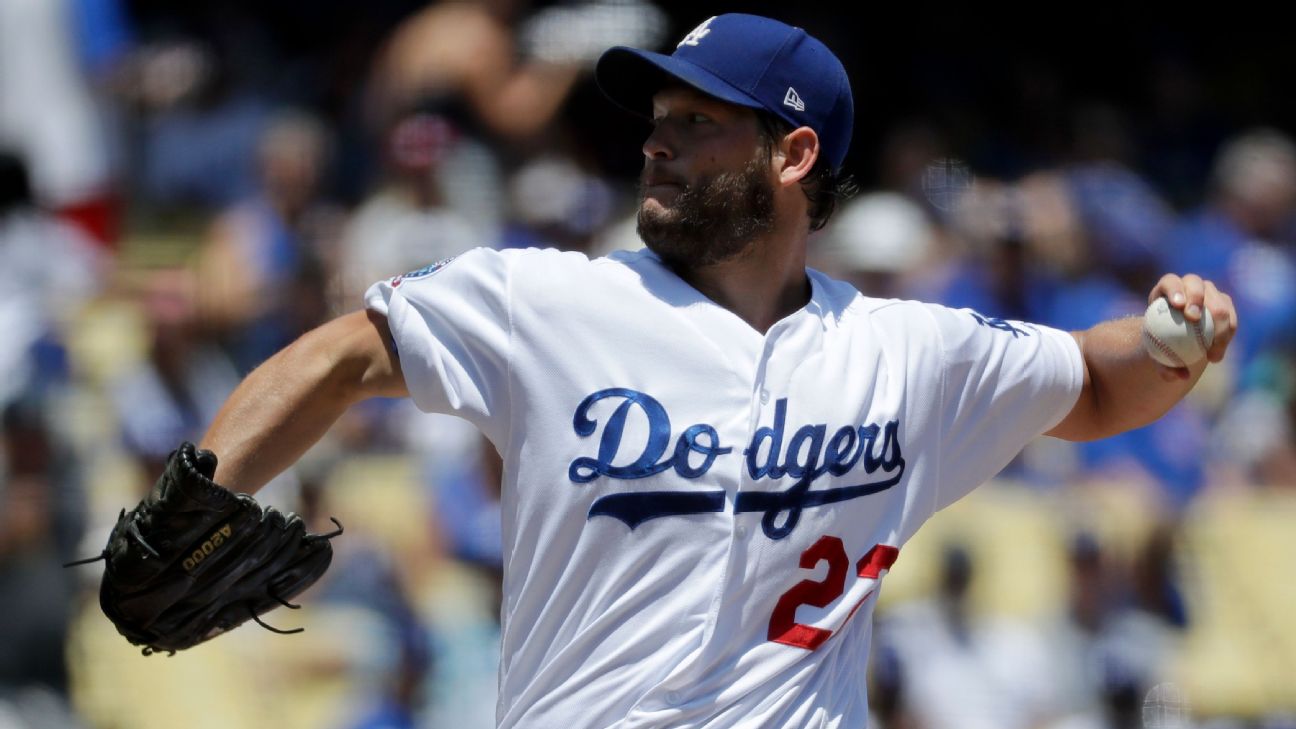 LOS ANGELES -- The fastball reached 93 mph, the curveball came with appreciable depth and the slider looked sharp. Clayton Kershaw breezed through five innings against a dangerous Chicago Cubs lineup on Thursday afternoon, scattering four baserunners while giving up only one run.

The Los Angeles Dodgers ultimately lost 11-5, falling for only the 11th time in their past 38 games -- but it appears they got their ace back.

"I saw 100 percent from him," Dodgers catcher Austin Barnes said of Kershaw. "I didn't see anything hampering or laboring or anything. I thought he was the Kershaw that I know."

Kershaw gave up only four hits and no walks in a five-inning, 68-pitch outing that constituted his second start since coming off his second stint on the disabled list. He added six strikeouts, three of them on his trademark sweeping curveball. The 30-year-old left-hander later called it "a good step to kind of prove that I'm healthy."

"Restrictions should hopefully be pretty close to off," Kershaw said, "and now I can get ready to just try to beat an opponent.

Thursday's loss, which allowed the Cubs to win the regular-season series, was handed to Dodgers rookie starter Walker Buehler, who made an appearance out of the bullpen rather than a previously scheduled start for Triple-A Oklahoma City.

Josh Fields, who has emerged as a premier setup option, was put on the DL because of inflammation in his shoulder and the Dodgers suddenly found themselves shorthanded in the bullpen. Their manager, Dave Roberts, had Buehler fly back Thursday morning and basically rehab in the major leagues for what would be his first appearance in nearly three weeks.

Buehler gave up a leadoff homer in the sixth and allowed five of the next eight batters to reach, setting up a seven-run seventh inning that blew the doors open.

Roberts didn't regret the decision, outside of the fact that it led to a loss.

He stated that Buehler is fully recovered from the microfracture to his ribs, and he expressed optimism over Kershaw.

"It was very positive for us moving forward," said Roberts, who didn't want Kershaw exceeding five innings or 75 pitches. "Clayton was efficient, got up and down five times. I thought the fastball had life -- 92, 93, good command. Curveball was sharp. And the slider was good. It's only going to get better."

Kershaw made only one start between May 2 and June 22. He initially went on the DL because of biceps tendinitis, then rejoined the rotation on May 31 and went right back on the DL because of a lower back strain the following day, making this the third straight year that his back has forced him to miss time.

In lieu of a traditional minor league rehab start, Kershaw pitched against the New York Mets at Citi Field on Saturday and gave up a couple of runs in three innings, expressing good health thereafter. On Thursday, he averaged 91.7 mph with his fastball -- standard for this season -- and generated 10 swinging strikes.

Kershaw pitched a 1-2-3 first inning, then worked around leadoff singles in the second and third. The red-hot Javier Baez led off the fourth with a double, then came around to score on a two-out RBI single by Addison Russell. In the fifth, Kershaw struck out Ian Happ looking with a 90-mph slider, struck out Kyle Schwarber swinging with a curveball in the dirt and retired opposing starter Jose Quintana on a weak comebacker.

"For the most part," Kershaw said, "there's definitely some things to be encouraged with today."

Kershaw still has only one win this season, but his ERA is 2.84 through 57 innings.

He has finished within the top five in National League Cy Young Award voting after each of the past seven seasons, winning three of them. But he hasn't topped 175 innings in either of the past two summers and might struggle to reach 150 this year.

As his back has acted up, his average fastball velocity has declined, from 94 in 2016 to 93 in 2017 to 92 in 2018. And soon he must decide whether to opt out of a contract that will pay him $65 million over the next two seasons, a dilemma that seems to grow more intriguing by the week.

For now, all that matters is that he's back.

"No loss feels good," Roberts said. "But I'll tell you, when you have your horse throw the way he did, in five innings, and felt really good after, and to know that we can build him up, and build on this start, that's probably the most important thing for our club. This loss doesn't feel good, but I think the bigger picture is good for us."
Report a correction or typo
Related topics:
sportsespndave robertsaustin barnesmlbwalker buehlerclayton kershawlos angeles dodgersjosh fields
Copyright © 2022 ESPN Internet Ventures. All rights reserved.
TOP STORIES
Griner pleads guilty to drug charges in Russian court
James Caan, of 'The Godfather' fame, has died, family announces
Girl dies after falling from moving SUV on freeway near Santa Clarita
Suspected parade shooter's dad speaks, says son raised with 'morals'
Disneyland's Facebook, IG accounts hacked, prompting investigation
Biden to award Medal of Freedom to Biles, McCain, Giffords
Husband of 'One Tree Hill' star, dead at 33 after lightning strike
Show More
Man hit boy with truck and posed as cop to try to kidnap him: LAPD
Dodgers' Orel Hershiser ask for public's help in finding missing dog
8-year-old girl injured on Six Flags ride by flying cellphone: Family
Fatal motorcycle crash shuts down eastbound 91 Fwy in Riverside
Gas prices fall in LA County, OC for 23rd consecutive day
More TOP STORIES News