Dodgers eliminated from playoffs; Cubs head to World Series for 1st time since 1945 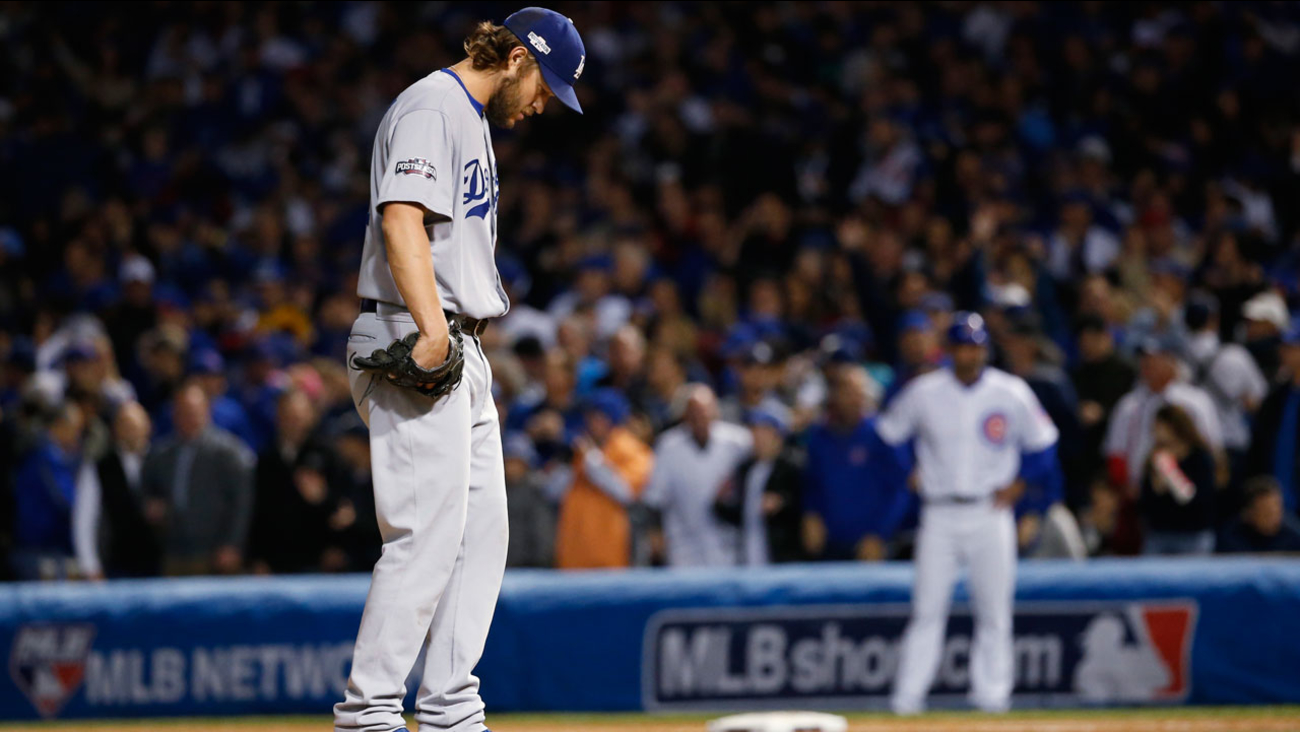 Los Angeles Dodgers starting pitcher Clayton Kershaw looks down as he pitches during Game 6 of the NLCS against the Chicago Cubs, Saturday, Oct. 22, 2016, in Chicago. (AP Photo/Nam Y. Huh)

CHICAGO (KABC) -- Cursed by a Billy Goat, bedeviled by Bartman and crushed by decades of disappointment, the Chicago Cubs are at long last headed back to the World Series.

The drought ended when closer Aroldis Chapman got Yasiel Puig to ground into a double play, setting off a wild celebration inside Wrigley Field, outside the ballpark and all over the city.

Seeking their first crown since 1908, manager Joe Maddon's team opens the World Series at Cleveland on Tuesday night. The Indians haven't won it all since 1948 - Cleveland and Cubs have the two longest title waits in the majors.

"This city deserves it so much," Rizzo said. "We got four more big ones to go, but we're going to enjoy this. We're going to the World Series. I can't even believe that."

All-everything Javier Baez and pitcher Jon Lester shared the NLCS MVP. Baez hit .318, drove in five runs and made several sharp plays at second base. Lester, a former World Series champion in Boston, was 1-0 with a 1.38 ERA in two starts against the Dodgers.

Deemed World Series favorites since opening day, the Cubs topped the majors with 103 wins to win the NL Central, then beat the Giants and Dodgers in the playoffs.

The Cubs overcame a 2-1 deficit against the Dodgers and won their 17th pennant. They had not earned a World Series trip since winning a doubleheader opener 4-3 at Pittsburgh on Sept. 29, 1945, to clinch the pennant on the next-to-last day of the season.

The eternal "wait till next year" is over. No more dwelling on a history of failure - the future is now.

"We're too young. We don't care about it," star slugger Kris Bryant said. "We don't look into it. This is a new team, this is a completely different time of our lives. We're enjoying it and our work's just getting started."

Hendricks pitched two-hit ball for 7 1/3 innings. Chapman took over and closed with hitless relief, then threw both arms in the air as he was mobbed by teammates and coaches.

The crowd joined in, chanting and serenading their team.

The Cubs shook off back-to-back shutout losses earlier in this series by pounding the Dodgers for 23 runs to win the final three games.

And they were in no way overwhelmed by the moment on Saturday, putting aside previous frustration.

In 1945, the Billy Goat Curse supposedly began when a tavern owner wasn't allowed to bring his goat to Wrigley. In 2003, the Cubs lost the final three games of the NLCS to Florida, punctuated with a Game 6 defeat when fan Steve Bartman deflected a foul ball.

This time, no such ill luck.

Bryant had an RBI single and scored in a two-run first. Dexter Fowler added two hits, drove in a run and scored one.

Contreras led off the fourth with a homer. Rizzo continued his resurgence with a solo drive in the fifth.

That was plenty for Hendricks, the major league ERA leader.

Hendricks left to a standing ovation after Josh Reddick singled with one out in the eighth. The only other hit Hendricks allowed was a single by Andrew Toles on the game's first pitch.

Kershaw, dominant in Game 2 shutout, gave up five runs and seven hits before being lifted for a pinch hitter in the sixth. He fell to 4-7 in the postseason.

The Dodgers haven't been to the World Series since winning in 1988.

Pitching on five days' rest, the three-time NL Cy Young Award winner threw 30 pitches in the first. Fowler led off with a double, and Bryant's single had the crowd shaking the 102-year-old ballpark.

They had more to cheer when left fielder Andrew Toles dropped Rizzo's fly, putting runners on second and third, and Ben Zobrist made it 2-0 a sacrifice fly.