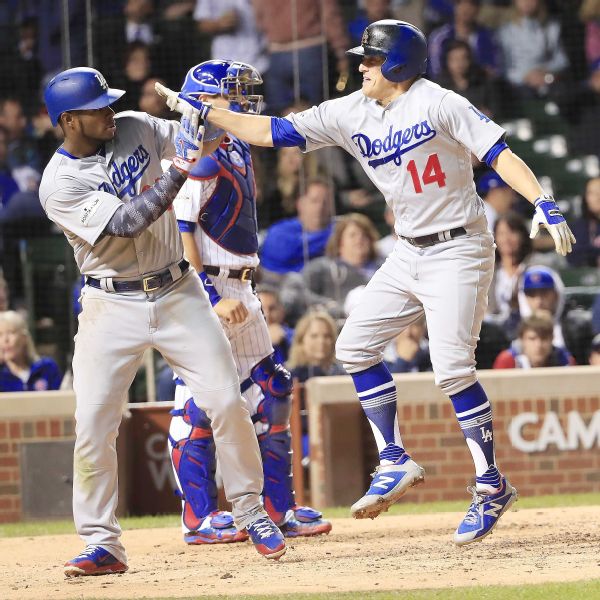 CHICAGO -- In his first at-bat of Game 5 of the National League Championship Series, in the second inning, Enrique Hernandez swung at the first pitch, a sinking 92 mph fastball from the Chicago Cubs' Jose Quintana, and launched it just over the netting in deep left-center for a solo home run and a 2-0 lead for the Los Angeles Dodgers. Yasiel Puig raised both arms in joy from the top step of the dugout, and Hernandez pointed to his family in the stands as he crossed home plate.

In his second at-bat, in the third inning, he came up with the bases loaded against Hector Rondon and again swung at the first pitch, a slider on the outside corner that he lined just over the netting in right-center for a grand slam and 7-0 lead. Hernandez circled his right arm in triumph as he rounded first base, gave Puig maybe the hardest high-five in baseball history, and then received two-handed overhead high-fives from Justin Turner and Cody Bellinger as he howled in a burst of elation.

Both home runs came with a nice little tailwind. Neither reached the first row of the bleachers. The total distance of the two swings that helped send the Dodgers to their first World Series since 1988? Just enough.

Here's the amazing thing: Hernandez wasn't done. He wanted to have his cake and eat it and follow it up with some ice cream and then drown himself in champagne. In the top of the ninth, he sat on a 2-0 fastball from Mike Montgomery and hit a two-run homer to center field for the exclamation point on the 11-1 victory. This one made it all the way to the second row. Joc Pederson was hopping up and down in front of the dugout, and even Puig tried to duck away from Hernandez's high-five.

The talk all series has been about the Dodgers' patience at the plate, their ability to lay off pitches out of the strike zone -- they led the majors in lowest chase rate during the regular season -- and run up the pitch counts of the Cubs' starters. But that approach doesn't mean players have to be passive at the plate. They have to be smart as well, and the Dodgers did swing at 23 percent of first pitches in the series.

"Quintana likes to get ahead with the fastball first pitch, so I went there aggressive and get a good pitch to hit," Hernandez said after the game. "The second at-bat against Rondon, it's no secret I struggled this season against right-handers, but it's the postseason; you have to grind it out, you have to lock it in and do your job any way possible."

For Hernandez, Thursday night was extra meaningful with everything going on back home in Puerto Rico. He has been wearing a Puerto Rico T-shirt under his game jersey, and on his Dodgers cap, he has penned "Pray for PR" in English and "Don't give up PR" in Spanish.

"Obviously people back home are having a really hard time right now, and for me to come here and do something like this is pretty special," he said. "My body's here but mind's kind of back home. It's hard being away from home with what's going on. ... All I want to do right now is go to my dad and give him a big hug."

Hernandez became the 10th player with a three-homer game in the postseason, joining Jose Altuve, who did it in the American League Division Series earlier this postseason for theHouston Astros. Hernandez tied a postseason record with seven RBIs, which also is the most for a National League player.

Maybe Hernandez's night was destiny. Clayton Kershaw said before the game that Hernandez told him: "Hey, I've got your back tonight."

"He said that before I even went out there," Kershaw said. "Then he goes and hits three home runs. It just seems that every single night, there's a different guy that's contributing. That's the measure of a great team."

Hernandez is one of those instrumental depth pieces, and his versatility allows manager Dave Roberts to mix and match his lineups and rest his regulars. Puig was the only Dodger to play at least 150 games this season, but Hernandez got into 140, starting at seven different positions while often coming off the bench as a pinch hitter or defensive replacement. He can crush lefties -- that's why he was in the starting lineup against Quintana -- as he slugged .518 against them, but he hit just .159 with one home run against right-handers.

It's a component that makes the postseason special. A team has to win with a complete roster, and sometimes it's that utility guy or the sixth reliever in the bullpen who ends up deciding a crucial game.

"I can't put this into words," Hernandez said. "It's something I've never even dreamed of. As I kid, you dream of getting the big hit in Game 7 of the World Series, but you never dream of hitting three home runs in a game. It means the world to me give the people of Puerto Rico something to cheer for, even if it's for three or four hours or however long this game lasted."

Like NLCS co-MVPs Turner and Chris Taylor, Hernandez was a minor addition when the Dodgers acquired him. After Andrew Friedman took over as president of baseball operations following the 2014 season, his first big trade was dealing Dee Gordon and Dan Haren to the Marlins. Andrew Heaney was the big prospect in the deal, and he was immediately traded to the Angels for Howie Kendrick, but the Dodgers also extracted Austin Barnes and Hernandez.

Now Hernandez sees his name alongside the likes of Babe Ruth and Reggie Jackson and George Brett and Albert Pujols. For a night, he's a Dodgers hero and a hero in Puerto Rico. It's OK if it's a blur. One day, it will sink in and Hernandez will realize it wasn't a dream.
Report a correction or typo
Related topics:
sportsespnworld seriesmlbenrique hernandezlos angeles dodgersthree home runs
Copyright © 2022 ESPN Internet Ventures. All rights reserved.
TOP STORIES
Kidnapped SoCal teen found in NY thanks to quick-thinking detective
FTC warns about baby formula scams on the rise amid shortage
NY high court to determine if Bronx Zoo elephant is a person
16-year-old girl stabbed by classmate in Montclair, police say
$45,000 reward offered in case of teen killed in Inglewood shooting
Controversy surrounds Villanueva over campaign ad filmed in church
House passes terrorism bill after shooting in Buffalo, New York
Show More
More than 50 brown pelicans found injured, sick or starving in SoCal
LAUSD gets more than $44M in grant funds for under-resourced campuses
Norwalk teacher arrested for allegedly sexually abusing 2 students
Alleged gunman sent diary to newspaper before OC church attack
What is monkeypox? What to know after US confirms 1st 2022 case
More TOP STORIES News