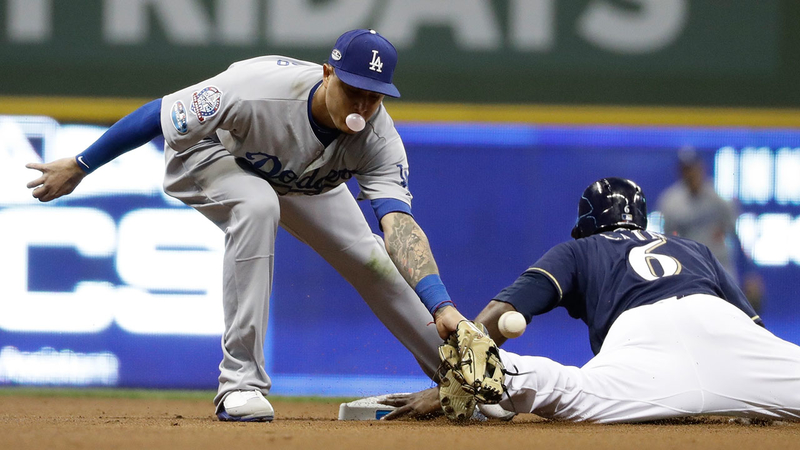 MILWAUKEE (KABC) -- Game 1 of the National League Championship Series went to the Brewers, who won 6-5 as the Dodgers fell into an early hole Friday in Milwaukee and fell just short in a late rally.

Los Angeles was first to strike, with a solo homer by Manny Machado in the second inning.

But Milwaukee evened it up in the third with a home run by Brandon Woodruff. That made him only the third relief pitcher in Major League Baseball history to homer in a postseason game. He's also the first Brewers pitcher to homer in a playoff game.

The 25-year-old Woodruff led off the third inning with a long drive to right-center, then pumped his right arm as the ball went out and Dodger ace Clayton Kershaw glanced back with an incredulous look on his face.

Dodgers pitcher Clayton Kershaw reacts as the Brewers' Manny Pina (left) and Orlando Arcia celebrate after scoring in Game 1 of the NLCS in Milwaukee on Friday, Oct. 12, 2018.

Milwaukee's bats kept it up, driving in more runs in the third and fourth inning, then making it 6-1 with a homer by Jesus Aguilar in the seventh.

The Dodgers had one big chance at rallying in the eighth, as Machado came up to bat with bases loaded and two outs, and Los Angeles still down 6-1.

Machado drove in two runs and then Matt Kemp brought in another, bringing the game within reach at 6-4. The eight-inning rally ended as Yasiel Puig struck out. Chris Taylor drove in one more run in the ninth off a deep hit to right field that bounced off the outfielder's glove. But Milwaukee reliever Corey Knebel held off the rest of the rally.

For Milwaukee fans, the win meant more than just advancing the Brewers one game closer to the World Series.

Local restaurant chain George Webb promised free hamburgers for everyone in Wisconsin if the Brewers won 12 games in a row. They were on an 11-game streak heading into the NLCS.

The promotion dates back to the 1940s, when the Brewers were a minor league franchise, The Washington Post reported. The last time it happened was 1987.