Dodgers have learned, 'You don't ever want to disappoint Chase' 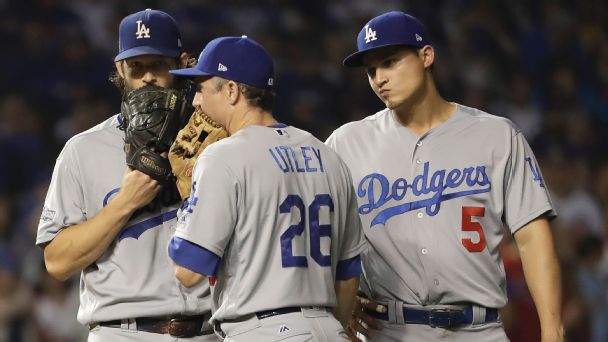 In early August, Corey Seager assumed responsibility for a decision more daunting than any double-play pivot or swing choice. He was entrusted with the responsibility of picking his double play partner's nickname for MLB's Players Weekend. The mandate came from none other than Chase Utley himself.

"I said 'Corey, this really isn't my thing, so I'm going to leave it up to you to decide what they put on the back of the jersey,'" Utley said.

Seager considered going with "The Man," the moniker that broadcasting great Harry Kalas bestowed upon Utley in Philadelphia. He talked to Utley's wife, Jen, and flirted with the idea of "Daddy," in mock reference to Utley's nurturing influence with Seager and the other young Los Angeles Dodgers. Ultimately, with input from his teammates, Seager opted for "Silver Fox," so that's the designation Utley wore on the back of his uniform. He wasn't especially thrilled with the nickname. But a deal's a deal.

"At this point, I get it," Utley said. "I hear jokes pretty much on a daily basis. We'll be watching an old game from the '80s and guys will say, 'Hey Chase, are you playing in that game?' I take it in stride, but I can dish it back for sure -- especially to guys that I'm in better shape than."

It's an extensive list. Utley, who turns 39 in December, was the 13th oldest player in the majors this season and the third oldest position player behind Ichiro Suzuki and Carlos Beltran. But with the exception of a worry line or two and the gray around the temples, he doesn't look all that much different from the UCLA kid who arrived in Philadelphia at age 24 and emerged as a driving force for a World Series champion and five straight first-place finishers from 2007 through 2011.

Utley's skills have diminished since his career peak, when he made five All-Star teams, won four Silver Slugger Awards and finished among the top 10 in NL MVP voting three times. And the numbers reflect the toll of age, time and injuries on his bat speed. Utley logged a mere 24 at-bats against left-handers this year, while slashing a modest .242/.327/.407 against righties.

But his influence in the Dodgers' clubhouse resonates in a way that statistics could never measure. It bridges races, cultures, ages and position groups and helps explain why Dodgers president of baseball operations Andrew Friedman was besieged with calls from teammates lobbying on Utley's behalf before the Dodgers signed him to a one-year, $2 million extension in February.

Utley's career keeps chugging along even as his old Philly running mates have drifted into retirement. Jimmy Rollins failed to make it through spring training with the San Francisco Giants and is doing broadcast work for TBS in the postseason. Ryan Howard hit .192 in 27 minor league games with the Atlanta Braves and Colorado Rockies this year and has almost certainly reached the end of the line at age 37.

And then there's Utley, dispensing insights or hunched over the video equipment in search of some miniscule clue that might make a difference in someone else's game. He's constantly in motion -- flitting back and forth from his locker to the batting cage, the weight room to the video room in the quest to find the slightest of competitive advantages.

During Utley's peak in Philadelphia, reliever Chad Durbin observed that Phillies players made sure to run out balls and tend to the fundamentals because they didn't want to "disappoint Chase." Almost a decade later, Utley's influence permeates the Dodgers' clubhouse in a similar manner.

"He's kind of the quiet leader of the team," Clayton Kershawsaid. "I think everybody looks up to him and wants to play the right way to please him. There's a level of accountability he creates within the team, just by doing what he does, that's huge. He's one of the best teammates I've ever been around.

"People talk about chemistry and creating a winning culture, and nobody can really put a finger on what it means. I can't even put a finger on what that means. But I know that's part of it in some way -- to have a multiple All-Star and a World Series champion who shows up early and works like he does every day. The presence is felt, for sure."

Everyone in Utley's Chavez Ravine orbit has a story or personal experience to share. Dodgers outfielder Chris Taylor has camped next to Utley in the dugout during games and says Utley has the "best baseball IQ I've ever seen" when it comes to predicting pitch sequences or ferreting out pitch-tippers. "He's never just casually watching the game," Taylor said.

Last spring, Peter Gammons wrote about how Utley once dressed up like a bat boy and delivered fresh balls to home plate to remind the umpire that Kershaw was being squeezed and needed those borderline calls. Utley did it discreetly, in a way that would get his message across without embarrassing the umpire or eliciting a confrontation.

Reliever Brandon Morrow has two stories: One reflects Utley's attention to detail, and the other speaks to his trickle-down influence throughout the Dodgers organization.

Morrow began the 2017 season with Triple-A Oklahoma City, and one day the coaches were stressing the importance of fundamentals. They made it clear that certain transgressions simply wouldn't fly with the big club in Los Angeles.

"Maybe the manager was exaggerating a little bit, but he emphasized, 'Those guys up there want you to pay attention. If Chase wants you to put on a pick play and you're not ready, he's gonna chew you out,'" Morrow said. "Even the coaching staff is putting the fear in people's head that Chase is watching."

Morrow received a firsthand glimpse of Utley's observational skills in July, when he was studying video and noticed that several camera angles were available at Dodger Stadium that he had never known existed. Morrow shared his revelation with Utley, who immediately commandeered the computer mouse.

"Chase says to me, 'Hey, do you want to see something?'" Morrow recalled. "And then he shows me how I was changing my grips very slightly with different pitches -- maybe by an inch. Five percent of people might pick that up, but he wanted to share it because it might help me from telegraphing a pitch down the road. He makes everybody else bear down on the finer details that he pays attention to, and he's enlightened people on what those details can mean."

Utley's team ethic and personal investment give him the currency to lay down the law when necessary. He's manager Dave Roberts' favorite conduit to convey the subtle reminders that keep a clubhouse running smoothly through a long, stressful summer.

"He cleans up a lot of stuff," Roberts said. "There are messages that I want to get to the team, to certain players, and Chase handles a lot of it. Sometimes a certain message should be delivered by the manager. But in another context, it can be more powerful coming from a guy like Chase.

"There's a certain identity that I believe is needed for our ballclub, and it starts with guys like Chase and Clayton and Justin Turner and Corey Seager. It's that blue-collar, grinder, laser focus. When you're playing in a city like Los Angeles, with Hollywood and all the celebrity, I want to have that blue-collar type ballclub."

Veteran leaders come in all types. While David Ross earned raves as the lovable, avuncular leader of the 2016 World Series-champion Cubs, Utley has always been hesitant to share much of himself for public consumption. Some fans and baseball watchers will always regard him as a villain for the 2015 takeout slide that tore up Ruben Tejada's knee, and parents had reason to cringe when Utley dropped a profanity during the Phillies' 2008 title celebration. But each time Utley returns to Philadelphia, he has to step out of the batter's box and tip his helmet to the crowd to acknowledge the cheers raining down from the stands.

Roberts' use of the term "blue-collar'' has an edge of irony given the Utley mystique that extends all the way to his attire on team charter flights.

"He has the really pressed white shirts, the European-cut pants, the black shoes and the hair," Roberts said. "He reminds you of James Bond."

Unlike Sean Connery, who begat Roger Moore, Pierce Brosnan and several other successors, Utley knows the movie version of his career will end whenever he plays his final game. He accepted certain realities upon leaving Philadelphia for Los Angeles and came to grips with the idea of logging 350 plate appearances rather than 600. As the only Dodger with a championship ring, he's feeling a particular sense of urgency this fall.

"It all comes back to what's most important for me, and especially at this point of my career, it's to win," Utley said. "That's what satisfies me the most. I've kept my body in pretty good shape, but I recognize the fact that I'm 38, and I don't feel like I did when I was 25. As much as I don't like to say it, I'm not as good as I was when I was 25. So I try to do everything I can to make the guys around me better players. Sometimes it works, sometimes it doesn't. But that's my goal."

Regardless of what happens in the postseason, Utley can bask in a solid final act. He's playing for a 100-win team in his hometown and passing along wisdom that will endure whether he's working in the Dodgers' front office three or four years from now or home coaching his two sons' Little League games.

Seager continues to file away those scraps of guidance and insight every day. He felt the Utley influence upon arrival from Triple-A ball in September 2015, and their cross-generational bromance has only grown stronger.

"I've had my moments where he said something to me -- not in an attacking way -- and you feel bad because you disappointed him," Seager said. "He's able to do it the right way, without screaming and yelling and getting in somebody's face, and I think that's the perfect way to keep a team moving in the right direction.