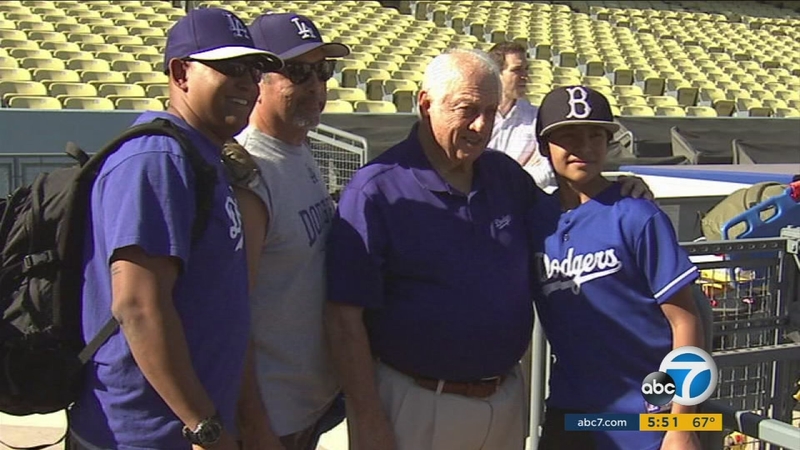 LOS ANGELES (KABC) -- Dodger Stadium belonged to America's team on Wednesday, as it welcomed U.S. veterans to take the field.

The cornerstone of the Los Angeles Dodgers was built on family and teamwork, so it was no surprise to see the organization honor the best team in the world, the U.S. military.

"I'm just as proud of them as I am of anything because they're the ones that wore the uniform of the greatest country in the world," Tommy Lasorda, former Dodgers manager, said. "And they're the ones making it possible for us to be doing things like this."

Veterans and active military members were invited to take batting practice, throw from the bullpen and meet former Dodger greats.

"I love the Dodgers. I've sat right there in those seats and watched these guys warm up so many times and you always wonder if you could go in there. Then you get a chance to do it, it's just great, it's incredible," said Army veteran Joe Garza.

Dodgers legend Don Newcombe was on-hand at the stadium signing autographs and sharing words with those in attendance.

Newcombe was a World Series champion, Rookie of the Year, National League Most Valuable Player and Cy Young Award winner during his career.

But maybe more importantly, he was a veteran of the Korean War.

"You know, growing up here in Southern California, I was watching the Dodgers on TV and being a kid it's always your dream to come play Major League Baseball. So to actually be able to be on the field, take batting practice, and walk around, it's like a dream come true," Jasen Watts with the U.S. Army National Guard said.