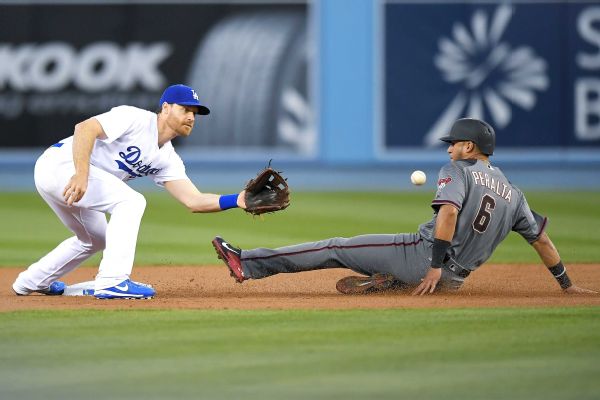 In addition, third baseman Justin Turner was held out of the Dodgers' lineup Wednesday after getting hit with a pitch on the left hand Tuesday night. Turner was hit on the knuckles of his ring and pinkie finger, but X-rays did not reveal any serious injury.

"It's a little sore, but I'm all right," Turner said after going through fielding drills Wednesday. He did not participate in batting practice.

Forsythe, whom the Dodgers acquired via trade from the Tampa Bay Rays this past winter, was hit by a pitch in the first inning of Tuesday's game against the Colorado Rockies. He stayed in the game but was removed at the end of the second inning.

The second baseman and part-time leadoff man was diagnosed with a hairline fracture of the toe on his right foot, although manager Dave Roberts said the injury was not quite clear on X-rays.

"We had our docs look at [the X-ray] today and it wasn't a clear fracture, but there was something in there that was causing some pain," Roberts said. "There was some sort of little hairline thing going in there, where it's not a four-to-six-week issue like a typical fracture."

Forsythe is likely to be out two weeks.

Segedin, who was called up Sunday when left-hander Rich Hill went on the DL, had one hit in two games.He was diagnosed with a right big toe strain.

When he sees action, Eibner will be making his Dodgers debut. He was acquired from the Oakland Athletics in a January trade. Eibner had a solid spring but was sent to Triple-A Oklahoma City to start the season.