Dodgers-Braves: Los Angeles falls into 0-2 hole with loss in NLCS Game 2 against Atlanta 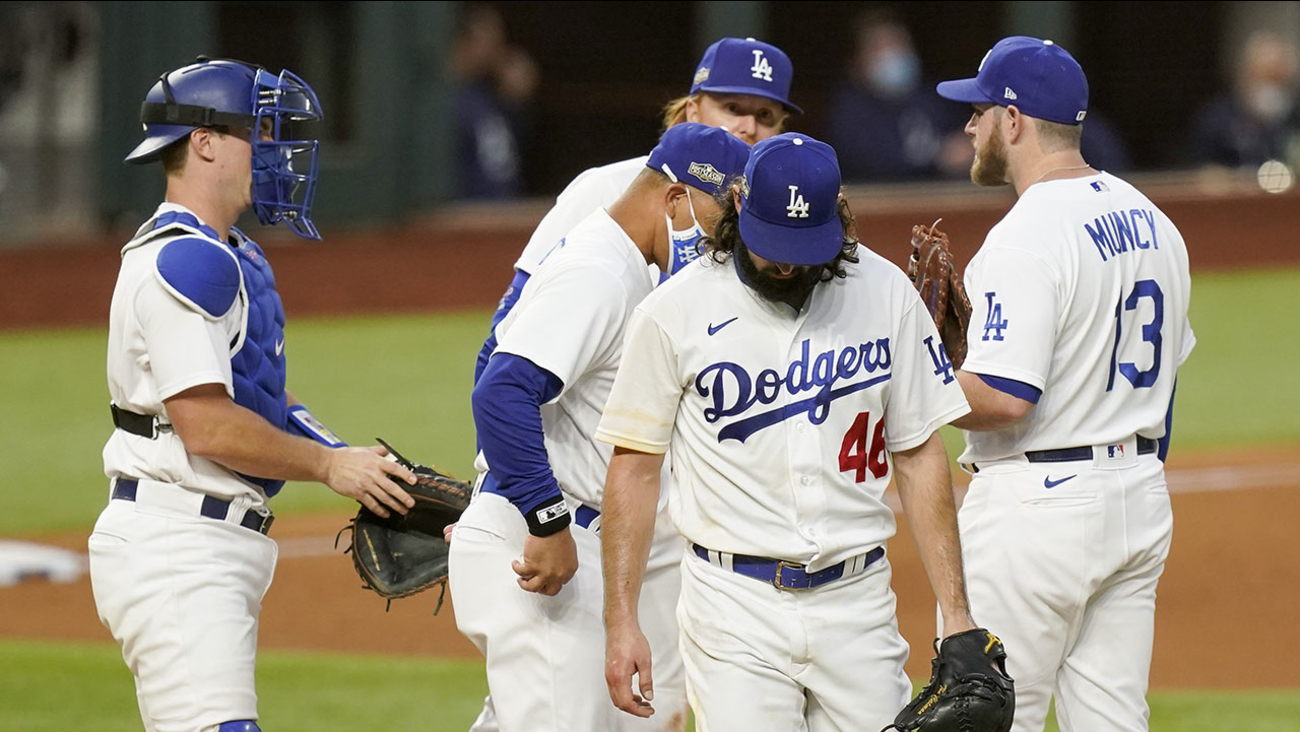 Dodgers starting pitcher Tony Gonsolin leaves the game during the fifth inning in Game 2 of the NLCS against the Atlanta Braves Tuesday, Oct. 13, 2020, in Arlington, Texas. (AP Photo/Eric Gay)

ARLINGTON, Texas (KABC) -- The Dodgers have fallen into a 0-2 hole in their bid to return to the World Series, dropping Game 2 of the NLCS to the Atlanta Braves Tuesday.

The 8-7 loss followed a dramatic last-minute rally that ended just short of a stunning comeback.

The Dodgers trailed all game, falling as deep as 7-0 by the seventh inning. They then made a late, last-minute surge, capped off by a huge triple from Cody Bellinger with two outs left to bring the team to within a run of tying.

But A.J. Pollock was thrown out at first to end the game.

The team was missing ace Clayton Kershaw, who was scratched from the lineup about six hours before the first pitch in Arlington, Texas because of back spasms.

Rookie Tony Gonsolin made his major league postseason debut in Kershaw's place. The right-hander hadn't pitched in a game since Sept. 26.

Gonsolin had earned a spot in the Dodgers' rotation in late August after several outstanding spot starts. He had a 2.31 ERA in nine games during the regular season with 46 strikeouts in 46 2/3 innings, earning consideration in the crowded field for the NL Rookie of the Year award.

Gonsolin started off strong, holding the Braves scoreless through three innings - but then gave up five runs by the time he was pulled in the fifth.

Things got worse for the Dodgers in the fifth as Cristian Pache laced an RBI double and scored on Freddie Freeman's single. Travis d'Arnaud followed with a bases-loaded walk against Pedro Baez, who also surrendered a sacrifice fly by Ozzie Albies. Cody Bellinger made a great catch to prevent Albies' ball from clearing the bases.

The Dodgers finally got on the scoreboard in the seventh inning, when Corey Seager homered with Joc Pederson and Chris Taylor on base, making it a 7-3 game.

Kershaw dealt with back pain once previously during an otherwise resurgent season for the 32-year-old left-hander, a three-time NL Cy Young Award winner.

Kershaw initially felt spasms after a bullpen session Saturday, three days after he went six innings to win Game 2 of the National League Division Series against San Diego. Manager Dave Roberts said Kershaw has felt better each day since but wasn't ready to make the scheduled start against the Braves.

Game 3 of the best-of-7 National League Conference Series is Wednesday at 3:05 p.m.