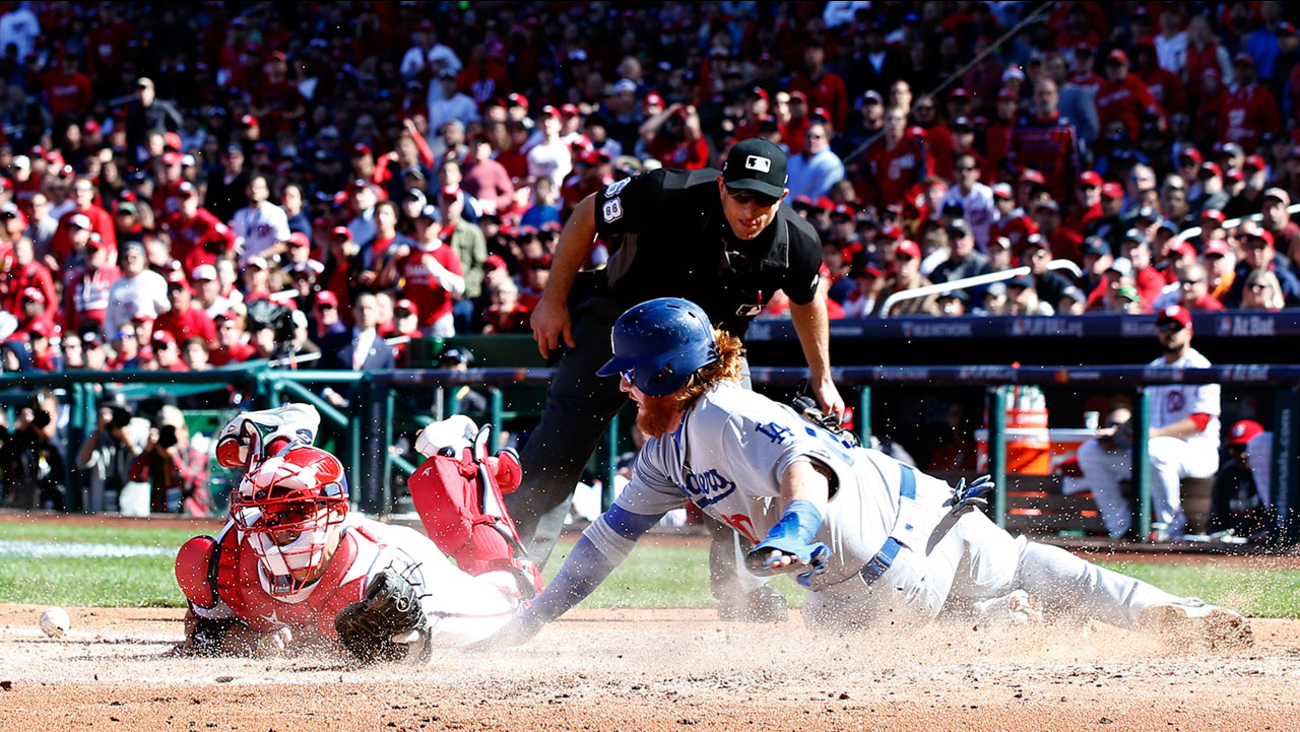 Dodgers' Justin Turner is safe at home when Nationals catcher Jose Lobaton can't hang onto the ball in Game 2 of the NLDS on Sunday, Oct. 9, 2016 in Washington. (AP Photo/Alex Brandon)

WASHINGTON -- Jose Lobaton got the chance to play in the postseason because of a teammate's late-September injury and, boy, did the little-used backup catcher make the most of it.

Lobaton hit a three-run homer, Daniel Murphy provided more-expected production by driving in a pair of insurance runs, and Washington's bullpen threw 4 2/3 scoreless innings Sunday, leading the Nationals past the Los Angeles Dodgers 5-2 in a rain-postponed Game 2 to even their NL Division Series at 1-all.

The Nationals trailed 2-0 in the fourth when No. 8 hitter Lobaton put them ahead for good by connecting off a curveball from Rich Hill after the Dodgers left-hander walked Murphy and hit a batter.

Hard to see this coming: Lobaton did not do much at the plate in 2016, batting .232 in only 99 at-bats overall, including 1 for 15 against lefties. Then again, that lone hit was also a homer, and also against the Dodgers - off Scott Kazmir in July.

Lobaton didn't even start the playoff opener, in fact. He sat behind rookie Pedro Severino, who had played all of 18 games in the majors.

Murphy, in contrast, has been Washington's best hitter all season, considered a top contender for league MVP honors. Indeed, fans chanted those three letters after each hit as he went 3 for 3, including RBI singles in the fifth and seventh.

The Dodgers had gone ahead on Corey Seager's second first-inning homer of the series and Josh Reddick's run-scoring single in the third on a play at home in which Lobaton couldn't hold onto Bryce Harper's throw home from right. Both runs came against Tanner Roark, who lasted 4 1/3 innings.

Five Nationals relievers did the rest, with Mark Melancon working around a single in the ninth - the lone hit allowed by the hosts' bullpen - to earn the save. Blake Treinen went 1 1/3 innings and got the win.

All in all, NL East champion Washington used the same formula that NL West winner LA did in Game 1 and, truly, all year: hit the ball over the fence and rely on shutdown relief.

And after the Nationals wasted plenty of opportunities to score in a 4-3 loss on Friday, it was the Dodgers' turn to come up short in the clutch: Los Angeles left the bases loaded three times.

The best-of-five series shifts to Los Angeles for Game 3 on Monday afternoon, with Game 4 there on Tuesday, creating an unusual three-consecutive-days setup in the playoffs, thanks to the loss of a travel day.

Game 2 originally was supposed to be played Saturday, when heavy showers in the morning and early afternoon - and a forecast that promised more - prompted Major League Baseball to push it into Sunday's planned off day. The rain had disappeared by an hour past the original first-pitch time, though, and 20-20 hindsight said that the game could have been played.

This one was played under a blue sky but in wind that topped 30 mph and the temperature in the 60s that prompted some players to wear wool caps during pregame warmups.

The Nationals went ahead 3-2 in the fourth, finally getting to Hill - who went 4 1/3 innings - in the unlikeliest of ways. After a walk and two quick outs, he plunked Danny Espinosa for the second time; Washington's shortstop has struck out in his other five NLDS plate appearances.

That mistake proved costly when the next batter, Lobaton, put the ball into the visitors' bullpen beyond left field, leading to chants of "N-A-T-S! Nats, Nats, Nats, Woooo!" from a sellout crowd of 43,826.