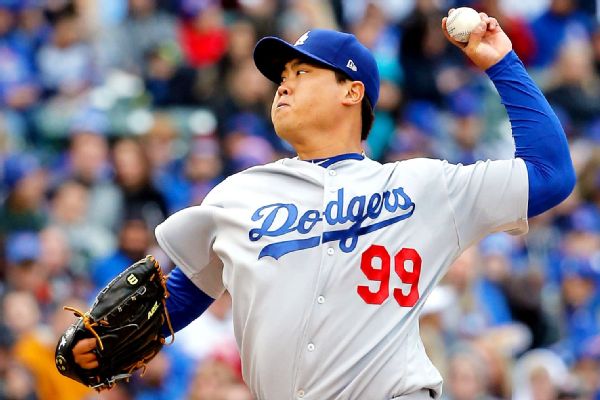 LOS ANGELES -- The Dodgers have placed left-hander Hyun-Jin Ryu on the 10-day disabled list with a bruised left hip. The move comes one day after he won his first big league game in three seasons.

The team said Monday that the injury is not considered serious and Ryu is expected to miss only one start.

Ryu pitched the Dodgers to a 5-3 victory over the Philadelphia Phillies on Sunday, earning his first win since Aug. 31, 2014. He missed all of the 2015 season and all but one game last season, coming back from shoulder and elbow surgeries.

Ryu was injured Sunday while sliding into second base in the bottom of the fourth inning. He kept pitching, though, going 5 1/3 innings.

"He took an aggressive slide into second base, and the glute kind of tightened up on him," manager Dave Roberts said. "So [we'll] get him in the training room, keep his arm in shape, and hopefully he'll make that turn when he's eligible to come off the DL."

The Dodgers brought back right-handed reliever Josh Fields to take Ryu's roster spot. This is Field's third stop with the Dodgers this season.