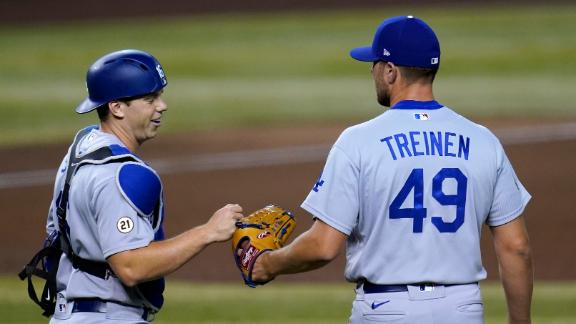 PHOENIX -- Chris Taylor and AJ Pollock each hit a run-scoring single in the 10th inning and the Los Angeles Dodgers overcame a rare off night for ace Clayton Kershaw to beat the Arizona Diamondbacks 6-4 on Wednesday.


"With the stuff he had the first couple innings, he was fine and for us to rally behind him there, win a game, was big," Dodgers manager Dave Roberts said.

Los Angeles tied the game with two runs in the fourth and its bullpen held to send the game into extra innings.

Jake McGee (3-1) struck out two in the ninth and Taylor lined a single off Kevin Ginkel (0-2) after Corey Seager started at second base under baseball's new extra-inning rules.

Pollock made it 6-4 with a single off Hector Rondon, and Blake Treinen worked a perfect 10th for his first save in the Dodgers' seventh straight win over Arizona.

Mookie Betts and Kike Hernandez each hit a solo homer for the NL West leaders, who are 5-1 in extra-inning games.

"Whatever inning it is, whether it's your first at-bat or last at-bat, we're treating it all kind of the same," Pollock said. "It plays in extra innings, it plays in pressure situations."

The Diamondbacks repeated a common theme that's plagued them the past month, again failing to come up with hits in key situations. Arizona finished 1 for 13 with runners in scoring position and lost for the 18th time in 20 games.

"I don't want to sit up here and sound like a broken record every time," manager Torey Lovullo said. "We've got to find a way to keep pressing on, execute and win these types of games. We have to raise the level of expectations."

Kershaw arrived in the desert on a four-game winning streak, but spent the early part of Wednesday's game struggling to locate pitches and muttering to himself.


Arizona loaded the bases with no outs against Kershaw in the second and took a 3-2 lead on a groundout, Jon Jay's sacrifice fly and Tim Locastro's triple. The Diamondbacks tied it 4-all in the fifth on Nick Ahmed's double and Betts' double error in right.

"As bad as I was, the only ball they really hit hard was Locastro's triple," Kershaw said. "I guess that's encouraging, as bad as I was."

Arizona starter Taylor Clarke had a rough outing his last start, allowing three runs in three innings against the Giants.

Betts greeted the right-hander with a leadoff home run and Hernandez hit another solo shot in the second. The Dodgers went up 4-3 with two runs in the fourth on a groundout and Hernandez's run-scoring single.

"A little up and down overall, some good things, some bad things," Clarke said. "Just being able to get through six gave us some much-needed innings I felt pretty good about."

The Diamondbacks placed INF/OF Ketel Marte on the 10-day injured list with left wrist inflammation. He was hitting .290 with two homers and 14 RBI in 40 games this season.

Dodgers: 3B Justin Turner could return from the injured list this weekend, possibly as a designated hitter. He's been out since straining his left hamstring stealing a base on Aug. 29. ... RHP Pedro Baez (groin) also could return this weekend after throwing two innings to hitters.

Diamondbacks: RHP Merrill Kelly had thoracic outlet syndrome surgery to relieve pressure on the nerves around his right shoulder. He is out for the season.

Dodgers: RHP Dustin May (1-1, 2.88 ERA) will pitch against Arizona on Thursday after allowing two runs in 5 2/3 innings of a no-decision against Colorado his last start.

Diamondbacks: LHP Madison Bumgarner (0-4, 8.44) will make his second start since returning from the injured list with a mid-back strain Thursday against the Dodgers. He allowed two runs in four innings against the Giants his first start back.