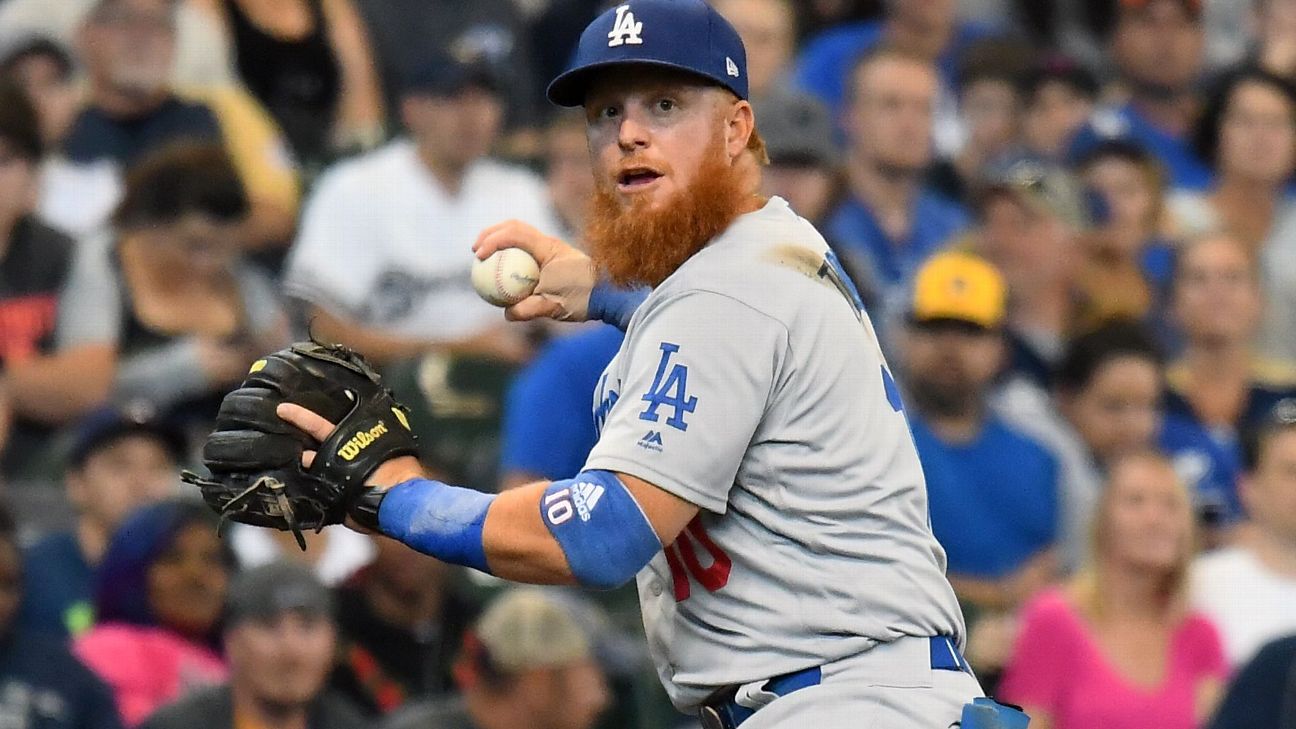 PHILADELPHIA -- The Los Angeles Dodgers placed Justin Turner on the disabled list with a right groin injury Monday and said Manny Machado will move from shortstop to third base until Turner returns to action.

The Dodgers recalled outfielder Alex Verdugo from Triple-A Oklahoma City to fill Turner's spot on the roster. Verdugo is hitting .349 with eight homers and 37 RBIs in 67 minor league games this season. He batted .267 in nine games during a previous call-up to Los Angeles in April and May.

Machado, acquired from Baltimore via trade for five minor leaguers last week, won Gold Gloves with the Orioles at third base in 2013 and 2015. He has made all 99 of his starts this season at short.

Turner went 1-for-2 with a run-scoring double Sunday in his first start since the All-Star break. He was removed from the game before the bottom of the third inning with right groin tightness. Manager Dave Roberts declined to predict if he will be ready to return at the end of his 10-day DL stint.

"It just made sense to do it, with where we were and what he could give us,'' Roberts said. "When you lose a player of J.T.'s caliber, [it hurts]. But to replace him with Manny and not compromise your defense, it's big for us.

"First and foremost, Manny was traded here to be a shortstop. We understand that. But the conversation I had with Manny last night was easy and one that I anticipated. He wanted to do whatever it was to help the ballclub and help us win. I know he sees himself as a shortstop, as do we. But with Justin on the DL, it makes a lot of sense for him to play third. I can't say enough about Manny and his willingness to do whatever we need for the ballclub.''

Turner began the season on the DL after breaking his left wrist in spring training. He returned May 15 and is hitting .259 with five homers and 20 RBIs in 50 games.

"I'm not happy," Turner told reporters after leaving Sunday's game. "Especially with the way the year has gone, it's been frustrating. It's just another thing that sucks."

Chris Taylor, who has started games at four positions for the Dodgers this season, moved to shortstop in conjunction with Machado's shift to third base. The Dodgers started an outfield of Joc Pederson, Cody Bellinger and Matt Kemp againstPhiladelphia'sZach Eflin in the opener of a three-game series at Citizens Bank Park.