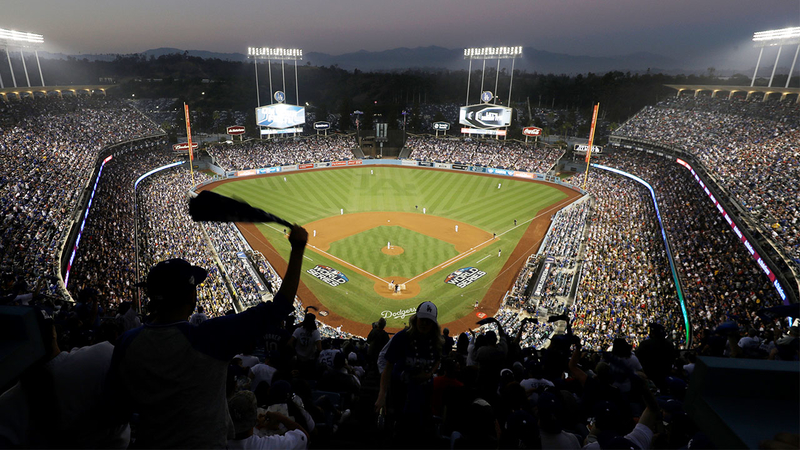 Dodger Stadium to return to full capacity on June 15

SAN FRANCISCO -- The boos rained down on Los Angeles Dodgers starter Trevor Bauer as he made his way toward the first-base dugout in the seventh inning from San Francisco, and Bauer figured he might as well embrace it.

He cupped his right hand around his right ear, then raised both arms to the sky, pleading for more vitriol.

The Dodgers beat the upstart San Francisco Giants in the first meeting of the 2021 season on Friday night, hanging on by a 2-1 score, and Bauer fully immersed himself into the rivalry.

"They're gonna hate me anyway, so might as well lean into it," Bauer said in reference to the 12,753 fans at Oracle Park, which has yet to be approved for full capacity. "I like when the crowd's into it. It makes the moment feel bigger, and I perform better in those moments. It just feeds me."

Bauer allowed one unearned run in 6 innings, striking out 11 batters and walking four while lowering his ERA to 1.98 through his first 10 starts with the Dodgers.

The Dodgers were in a bind, playing one day after utilizing seven relievers in what amounted to a bullpen game. They needed Bauer to pitch deep into the game, and after lobbying to come back out for the seventh, he ultimately contributed 126 pitches, one shy of his career high.

The only run against Bauer came on his own error, when he fielded a comebacker but threw wide of first base, allowing a run to score with two outs in the sixth. Bauer got the next batter to fly out, then was seen walking into the tunnel with Dodgers manager Dave Roberts as part of an effort to negotiate himself back into the game despite having already thrown 113 pitches.

Bauer came out for the seventh, walked the leadoff batter, got a flyout, then gave way to newcomer Nate Jones, who retired the next five hitters.

Bauer, who has already completed at least six innings nine times this season, believes he could have stayed in longer. In his short time getting to know him, Roberts has been impressed by Bauer's "ability to reach back for more."

This weekend series marks the first time the Giants and Dodgers meet with the Giants possessing the better record since June 2016. The Giants went into the year looking like a team in transition, but they have received major contributions from aging stars such as Buster Posey and Evan Longoria and a veteran-laden rotation composed mostly of castoffs.

Despite the loss, the Giants (28-17) are tied with the division rival San Diego Padres for the best record in the sport. But the Dodgers, winners of nine of 10 after a recent slide, are only a game back. Friday marked only the second time ever that the Giants and Dodgers have faced each other with both teams coming off a sweep of a four-game series, according to Elias Sports Bureau research.

The game was decided on a two-run homer by Chris Taylor -- but it was punctuated by Bauer.

"I'm sure Giants fans will love to hate Trevor," former Dodger and current Giants starter Alex Wood said, "and he'll love that they hate him."

Bauer's trolling conjured images of the late Tommy Lasorda egging on a Giants crowd in a similar fashion during his last game at Candlestick Park in the mid-1990s. Bauer said that was merely a coincidence. His intent was a lot simpler than that.