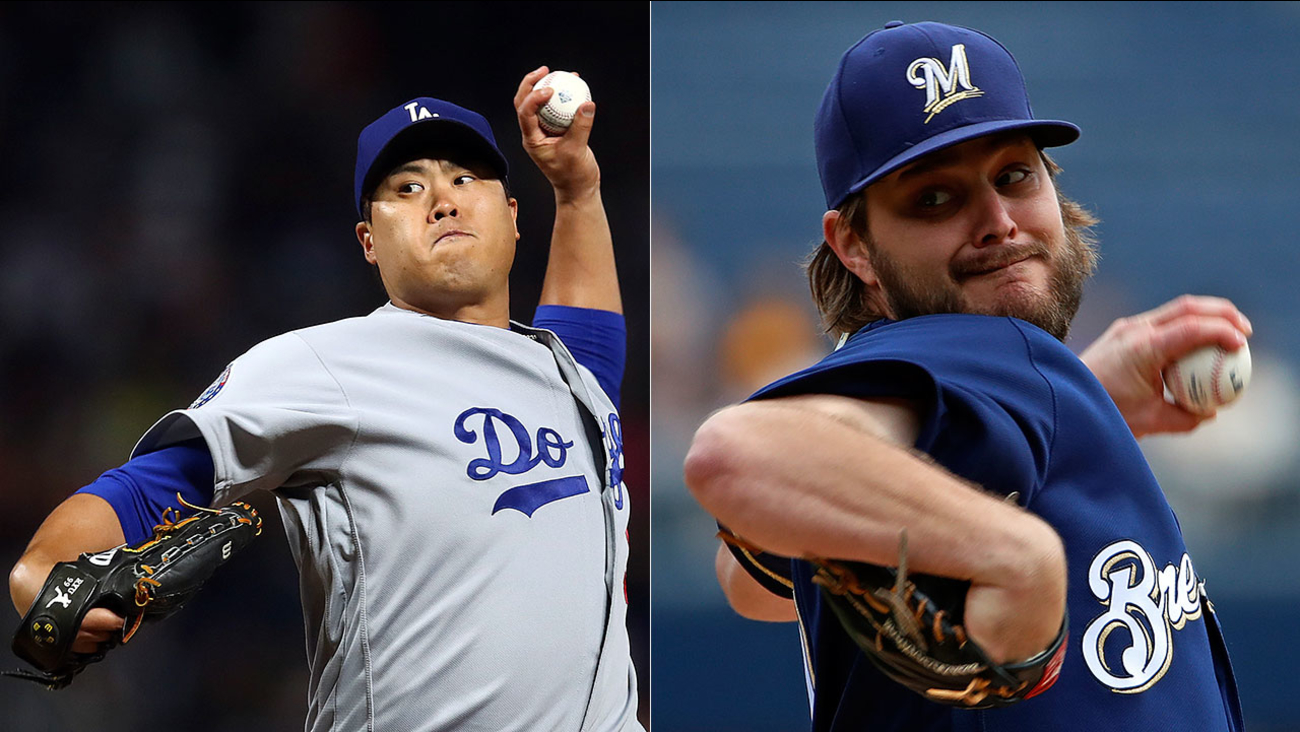 Game 2 of the National League Championship will open as a battle of left-handers with Hyun-Jin Ryu starting for the Dodgers and Wade Miley for the Brewers. (AP Photos/Ben Margot/Gene J. Puskar)

MILWAUKEE (KABC) -- The Dodgers lost Game 1 of the National League Championship Series to Milwaukee and are looking for revenge Saturday at Miller Park. The winner of the seven-game series heads to the World Series.

Here are some keys to Game 2:

STARTING PITCHERS: The Brewers will send left-hander Wade Miley to the mound in Game 2 against leftie Hyun-Jin Ryu for the Dodgers. Ryu pitched seven shutout innings in Game 1 of the Division Series against the Braves. Ryu is 2-0 with a 1.96 ERA in four career postseason starts.

Miley is making his second start of the postseason, going 4 2/3 innings in the Brewers' Division Series-clinching victory over Colorado on Sunday. He is 4-5 with a 3.55 ERA in 15 career games against the Dodgers.

MATCHUPS: Battle of the bullpens. If both starters are knocked out early, the Dodgers could have a slight advantage despite the strength of Milwaukee's bullpen. The Brewers used most of their big arms in Game 1, including Josh Hader who pitched three scoreless innings, while the Dodgers' big arms stayed on the bench. Milwaukee's bullpen did struggle late, giving up four runs in the final two innings of their Game 1 win.

THINGS TO LOOK FOR: Will the Dodgers stay with a heavy right-handed lineup despite another lefty on the mound? Or will Dave Roberts opt for some added power with Yasiel Puig, Max Muncy and Joc Pederson, who each had over 20 home runs and 60 RBIs during the regular season. If Roberts stays with the same lineup as Game 1 and the Dodgers fall behind early, look for those three to be inserted to spark the offense.