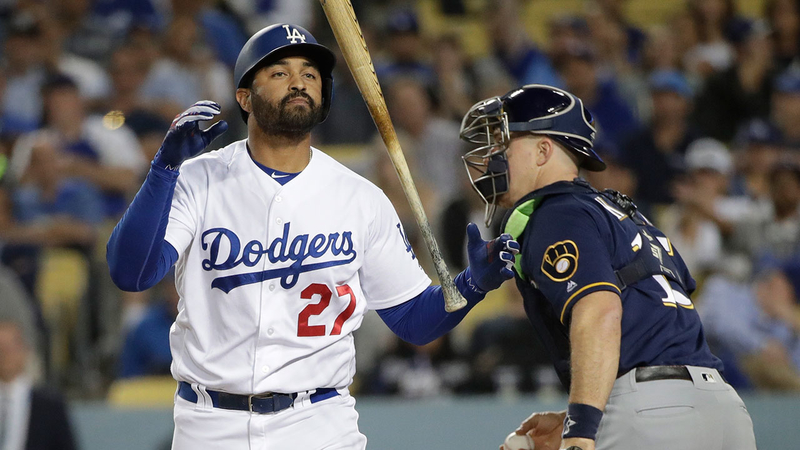 Dodgers vs. Brewers: Dodgers look to even series in NLCS Game 4

LOS ANGELES (KABC) -- The Dodgers dropped Game 3 of the National League Championship Series at home against the Milwaukee Brewers on Monday. With the Dodgers now down 2-1 in the series, the team looks to draw even in a pivotal Game 4 on Tuesday.

Here are some keys to Game 4:

STARTING PITCHERS
The Dodgers will turn to Rich Hill to start as Milwaukee opts to go with left-hander Gio Gonzalez, who started the first game of the series.

Gonzalez pitched two innings before he exited the game and allowed one run, a home run to Manny Machado. He will pitch on three days' rest.

Hill takes the mound after pitching Game 4 of the National League Division Series, where he pitched 4 1/3 innings, but didn't factor in the decision.

MATCHUPS
The Dodgers are looking for more offense after scoring no runs against Brewers' pitching on Monday.

The Brewers' bullpen rebounded in Game 3 after disappointing performances in previous games. The Dodgers hit .333 and scored eight of their nine runs against Brewers relievers during the first two games in Milwaukee.

In Game 3, the relievers helped blank the Dodgers.

THINGS TO LOOK FOR
The Dodgers' offense will attempt to get back on track after scoring no runs in Game 3, while the Brewers look to repeat its pitching performance from Game 3.