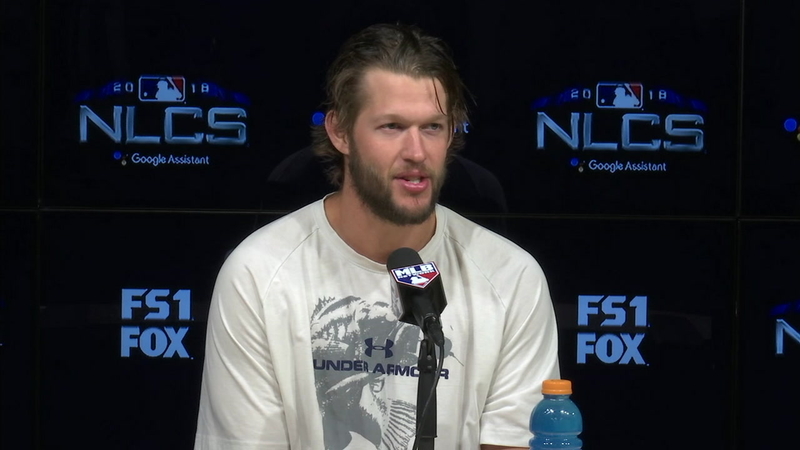 LOS ANGELES (KABC) -- Game 5 of the National League Championship Series went to the Dodgers, with a 5-2 victory that leaves them just one win away from a second consecutive World Series appearance.

Although Milwaukee scored first at Dodger Stadium, Los Angeles took the lead in the sixth inning and didn't let go, as ace Clayton Kershaw and the bullpen kept a lid on the Brewers' efforts at a rally.

The Dodgers started Kershaw and kept him in as he retired batter after batter. He finally was pulled after seven innings, giving up just three hits and a run.

Kershaw also scored a run off a single by Justin Turner.

After the game, Kershaw noted it will be a challenge to close out the series as it shifts to Milwaukee's Miller Park.

"We know it's not going to be easy," Kershaw said. "Milwaukee is a great team and back in their home ballpark, they'll be excited for that."

By contrast, the Brewers started pitcher Wade Miley - but he didn't last long.

Counsell surprisingly emerged from the dugout and called for right-hander Brandon Woodruff to face the rest of a Los Angeles lineup featuring six right-handed batters.

The move appeared to be a planned one and Miley is slated to start Game 6 in Milwaukee.

Counsell already was at the vanguard of the recent wave of managers figuring out new ways to use their bullpens throughout this season.

Dodgers manager Dave Roberts said before the game he had put Cody Bellinger as leadoff batter because he liked his previous at-bats against Miley.

Every game Kershaw pitches this postseason in a Dodgers uniform could be his last, as he can opt out of his contract at the end of the season and has not yet announced his decision.

Kershaw has long been considered one of the best pitchers in baseball. Drafted by the Dodgers in 2006, he has won three Cy Young Awards and one National League MVP.

Game 5 of the NLCS went to the Dodgers, with a 5-2 victory that leaves them just one win away from a second consecutive World Series appearance.

He has at times struggled in the postseason, including giving up five runs in three innings of Game 1 - but his performance before 54,502 at Dodger Stadium may help erase some of those memories.

Kershaw pitched in and out of trouble in the third, when the Brewers loaded the bases and scored their lone run. He struck out Jesus Aguilar to end the third, the first of 13 consecutive batters that the left-hander retired.

Should Rich always be mic'd up? The answer is #HillYes. pic.twitter.com/EHYKi6eNaf

Game 6 is Friday 5:39 p.m. at Milwaukee's Miller Park. Lefty Hyun-Jin Ryu will start for the Dodgers against Miley for Milwaukee.